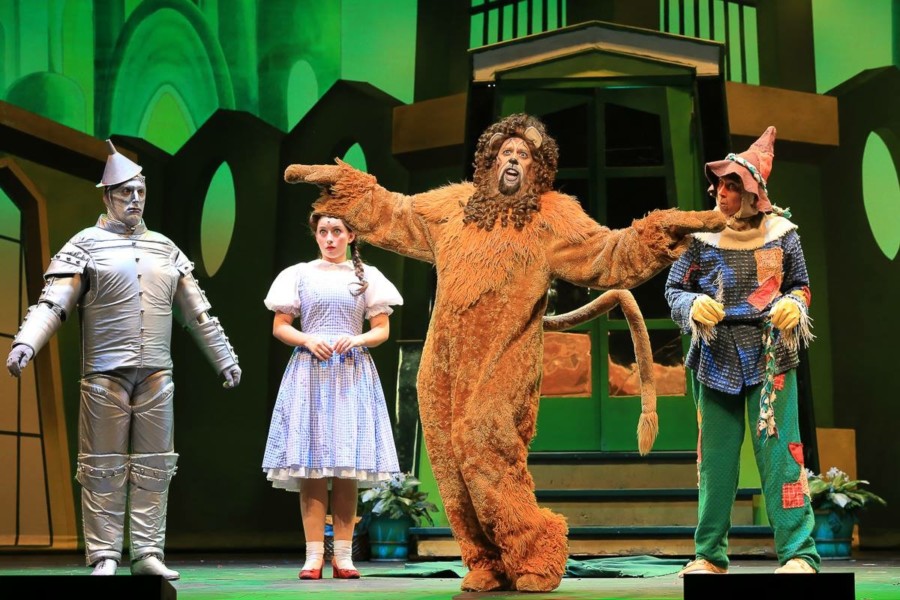 The Wizard of Oz – Not Exactly Rainbow High

The Wizard of Oz – Not Exactly Rainbow High 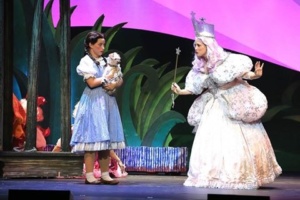 Just in time for the end of the school year, The Madison Square Garden Company is bringing the family friendly classic, The Wizard of Oz, to the historic Chicago Theatre for a limited two week engagement. We all familiar with the relatable tale; a tornado rips through the Kansas farmland of the family Gale, whisking away our young heroine, and her little dog too, crash-landing them smack dab in the middle of the magical land of Oz. L. Frank Baum’s children’s book was masterfully turned into the classic 1939 MGM movie starring Judy Garland in the title role. Populated with ahead of its time visuals and highly inventive special effects, this wildly imaginative cinematic masterpiece is now being staged live for a sophisticated Windy City audience, and regrettably, doesn’t hold a candle to the original. Under the direction of Dean Sabon’s eye, this rendition of Oz is significantly smaller in scale and utterly reigned in imaginativeness. 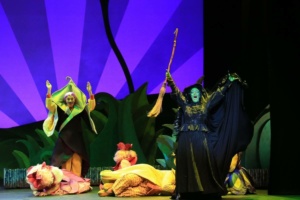 If you have seen the superior musical, Wicked, this rendition plays like a remarkably watered down version of that same show. Tim McQuillen-Wright’s set pieces and costumes fail to make much of an impact at all. The overreliance on Dan Efros’ background Projections and ZFX Aereographics make certain of that, usurping all audience attention and focus. Brandon T. Miller’s wig designs clearly proved the budget here was barebones. People, if we are shooting for creativity that is “over the rainbow” then honestly, there should have been drastically more visual impact than any random local high school’s production of the same material. Amy McCleary’s athletic choreography was an appreciated bright spot, although the munchkins here range in height from 5 to 6 plus feet tall, so suspension of disbelief is a requirement for every audience member to enjoy. 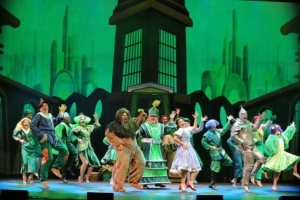 We start in Kansas, a spry Dorothy Gale (Kalie Kaimann) on the run with her mischievous dog, Toto (Murphy) a terrier mix who single handedly steals every scene he is in, from themean spirited Mrs. Gulch (the scenery chomping Emily Perzan). The curt Aunt Em (Ashleigh Thompson) and loveable Uncle Henry (Michael Weaver) aren’t much help against a tyrant like Mrs. Gulch either, so Dorothy feels compelled to run away, with Toto in tow. Trapped in a CGI twister, they soon find themselves on a journey of a lifetime upon landing in Munchkin Land. Aided by a magical pair of Ruby Slippers, gifted by Glinda, Good Witch of the North (Ashleigh Thompson), Dorothy ventures out to meet the magical Wizard of Oz in hopes he will help her return home. A terrific trio of support comes in the form of a limber Scarecrow (Chris Duir) fantastic in his solo “If I Only Had a Brain”, a tap dancing Tinman (Christopher Russell) and The Cowardly Lion (Victor Legarreta) who drew the biggest cheers of the night during both “If I Only Had the Nerve” and “If I Were The King of the Forest”. His milksop pussycat clearly still the nostalgic fan favorite. 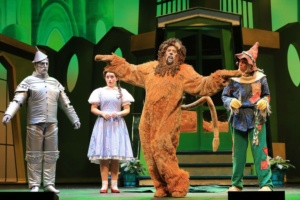 Upon meeting The Wizard of Oz (Kirk Lawrence) the quartet is tasked with bringing back the enchanted broomstick of the Witch of the West. Not to worry, with the addition of a team of dancing crows, preening and posing apple tree songstresses, high stepping, spandex clad Jitterbugs and obedient flying monkeys, the drama is never so intense as to frighten the littlest members of any family in attendance, to which this show has clearly been designed to appeal. The energetic act two Emerald City “Merry Old Land of Oz” makes up for many of the show’s shortcomings. Music Director Lizzie Webb walks away the most unscathed, the early appeal of the Harold Arlen and E.Y. Harburg’s classic “Over The Rainbow” an act one highlight. “Ding Dong! The Witch is Dead” as a production number also has its charms, once you get over the fact the munchkins tower over Kaimann’s Dorothy by at least a foot. 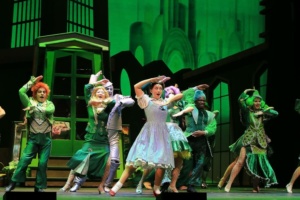 If you are going to be ambitious enough to restage a much loved and revered cinematic classic, then everyone must bring their A game as well as a powerful eye for detail. Regrettably The Madison Square Garden Company swigs wide and misses the ball completely. If this is your first exposure to live theater, and I am guessing it will be for the younger members of the audience, then you may be slightly charmed by this “Wonderful World”. Chicago is enough of a theatrical town that all involved should have know better, and shot higher. At over $100 a ticket for the seats closest to the stage, nylon wigs shouldn’t appear to have been purchased in the half-price bins during an after Halloween clearance sale at the local CVS. Glinda’s hairpiece is an embarrassment of epic proportions. The cast certainly tries as hard as they can to sell it, however this piece never reaches the heights it should, regardless of how many times you click your heels together and pray. Sadly, the highlight of a night out like this is knowing there is indeed, “no place like home”. Pop in the DVD if you’re feeling truly nostalgic. This Wizard of Oz never gets off the ground. 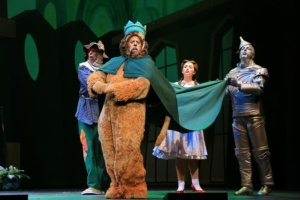 The Wizard of Oz is currently playing at the Chicago Theatre through May 20, 2018 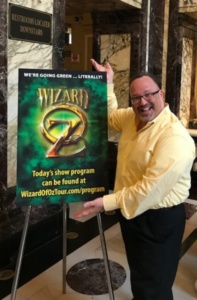 RossOctober 21, 2021
Read More
Scroll for more
Tap
Meet The Drama Desk Nominees: Angels In America, Once On This Island and More
EST’s Bump is Premature