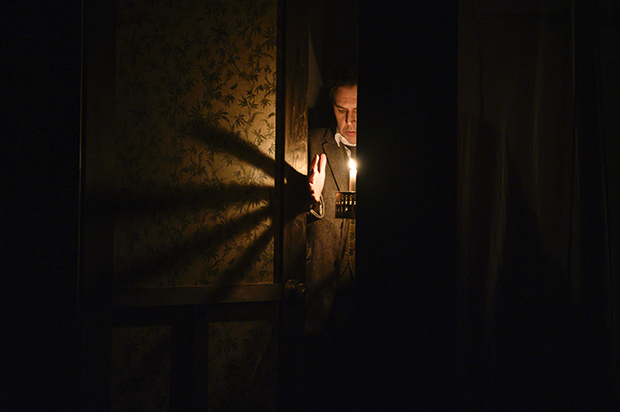 The Woman in Black: A Ghost Play in a Pub is a scary, delightful, well done evening in theatre. Based on the 1983 gothic novel of the same name by Susan Hill and staged in the Club Car space at the McKittrick Hotel, the show performed nearly 30 years ago in London keeps its freshness.

The tales stars when an aging lawyer Arthur Kipps (David Acton) decides to tell his family and friends what has been haunting him all these years. He employs a thespian (Ben Porter) who’s agreed to help him share his story, despite the fact that Arthur can’t act. Arthur’s version of the tale is five hours long and includes every detail. Playing Arthur and giving rewrites we meet him as young man when he is asked by his law firm to visit a secluded manor in northern England to handle the affairs of the recently deceased Mrs. Alice Drablow. The story is really a play-within-a-play.

No one on the island wants to talk about Alice or the manor Eel Marsh House. It is unreachable from the main land during high tide. he then sees the ghosts who haunts this place, first at the cemetery and then as he gets a ride to the manor. A mysterious door is locked from the inside, a rocking chair creaks and Arthur is unnerved by the presences that keep leading him to the finale. He misses his fiancée, Stella and he becomes haunted by the unraveling of the horrors within.

The show is directed by Robin Herford, but he honors the original staging by Stephen Mallatratt. There are plenty of nerve jangling moments and the girl next to me and I jumped several times. Thanks to the direction, music, lighting and superb acting.

Acton and Porter are impressive handling this two person play. Acton taking on countless characters throughout and each is distinct and well thought out. Porter plays the thespian and young Kipps and manages to make us feel as if we know each one. Theses two work well together and create a chilling tale, that is full of fright.

My only criticism, is the chairs are extremely uncomfortable and you slide off them. I took my cushion and used it as a back rest and that solved a lot of the problems.

Head on down to the McKittrick for a thrilling theatrical evening that won’t disappoint.