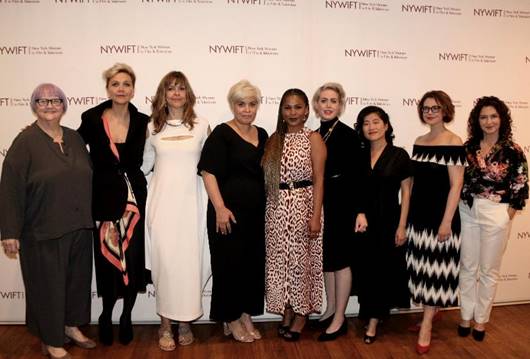 New York Women in Film & Television (NYWIFT), which has empowered and championed women in the entertainment industry for 40 years, honored the women behind the scenes at this year’s New York Women in Film & Television Designing Women Awards Gala on Monday, May 21, 2018. The 19th annual event celebrated the distinguished makeup artists, hair stylists and costume designers that work tirelessly to create the characters on screen in film, television and digital media.

Debra Monk presented Variety’s Ensemble Award to the acclaimed Amazon series Mozart in the Jungle for its makeup, hair and costume design teams.

“The Designing Women Awards is one of my favorite events of the year because it allows us to recognize the contributions of incredible entertainment professionals who are rarely in the spotlight – those behind the scenes,” says Terry Lawler, Executive Director of New York Women in Film & Television. “Without the artistry and work of these exceptionally talented women, the film and television characters that we love could not exist. It’s essential that we commemorate the value that each and every single one of these amazing women brings to the industry.”

This unique showcase of extraordinary achievements by women in the film, television and digital media industries, co-presented by Variety, was attended by actors, producers, directors, writers, fashion industry leaders and, of course, designers. Comedian Sunda Croonquist hosted the evening’s festivities.

New York Women in Film & Television (NYWIFT) advocates for equality in the moving image industry and supports women in every stage of their careers. As the preeminent entertainment industry association for women in New York, NYWIFT energizes women by illuminating their achievements, presenting training and professional development programs, awarding scholarships and grants, and providing access to a supportive community of peers. NYWIFT brings together nearly 2,500 women and men working both above and below the line. NYWIFT is part of a network of 50 women in film chapters worldwide, representing more than 15,000 members. For further information about New York Women in Film & Television, please visit nywift.org and follow them on social media for additional event updates, news and photos.