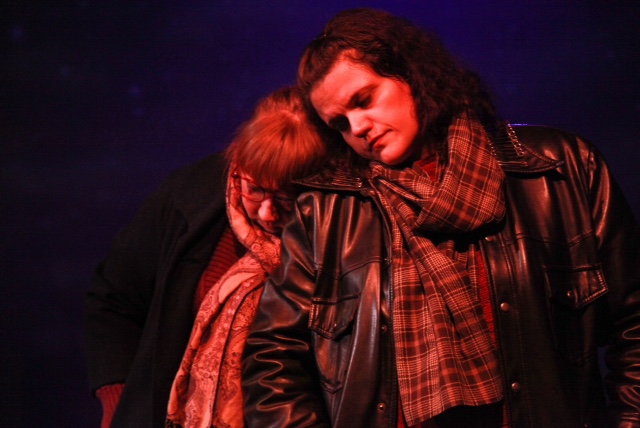 The Women of Lockerbie – Proving a Woman’s Worth

The Women of Lockerbie – Proving a Woman’s Worth 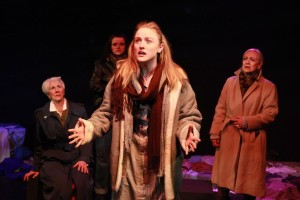 Survivor’s guilt and a determination to do the right thing are at the heart of playwright Deborah Brevoort’s passionate new piece, The Women of Lockerbie, now playing at the Raven Theatre. Attempting to create triumph out of an act of terror, a team of Scottish women unite in an effort to do good in the aftermath of a bomb exploding on a plane. December 21, 1988 was the fateful day Pan Am Flight 103 exploded over Lockerbie, Scotland, ending the lives of all 259 people on board as well as 11 people in the small town below. The “fireball over Scotland” turned a quiet town into a instantaneous disaster area overnight. Director Robert Tobin and his worthy ensemble put respectful and resourceful faces on this story. 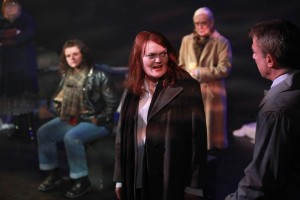 The play begins with an American couple, Bill (Jeff Brown) and Madeline Livingston (Amy Kasper) two desperately exasperated parents, trying to make sense of their collective grief in the aftermath of their son Adam’s death. He was traveling back home to the States for the holidays and was, regrettably, aboard that fateful flight. Trying futilely to find closure from this senseless terrorist bombing, the couple meet a group of local women known as the “Woman of Lockerbie” (Barbara Button, Lorraine Freund, Morgan Manasa, and Haley Rice) who offer them compassion and guidance. Lead by the outspoken and headstrong, Olive (Alexandra Bennett) who desires her own answers as well. Her family, as it turns out, was also forever detrimentally impacted by the shower of the plane’s fiery debris. “The Woman of Lockerbie” are resolute in their collective fortitude to “turn this act of terrorism into an act of love.” They decide they want to wash the clothes of the dead and return them to all of the individual victims’ families.  Hindering their mission, an American bureaucrat, George Jones (Ray Kasper) who will not release this “evidence” to the women. That would violate the international protocol set up by all the governing nations involved. With the help of Jones’ secretary, Hattie (Sara Pavlak McGuire) the women, joined by Mrs. Livingston, storm the bunker housing the vestiges, and come face to face with the victim’s blood soaked remains, nicknamed the “shelves of sorrow.” Tearing through the items, Livingston exclaims  “there is nothing of Adam’s on the shelves of sorrow” before collapsing into a pile of regret and tears. Putting a face to the remarkable grief, bureaucrat Jones returns Adam’s charred suitcase to the parents. Bring Kleenex with you for this particularly heart wrenching scene. 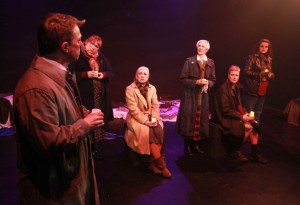 The Women of Lockerbie’s creative team included set design, draped with pieces of sporadically placed clothing, crafted by Jeremiah Barr. Samantha Barr’s mood setting lighting added an almost tangible mist which covered the environment of the proceedings. Uriel Gomez’s real world costume design of taupe overcoats and rain boots added authenticity. Kendra Kingsbury vocal dialect coach’s results were fleeting at best.  Accents came and went on the day I attended, but the overall effect was so moving, I will forgive. 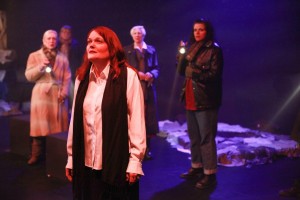 Inspired by a true story, this provocative drama about the tenacity and resilience of the human spirit amidst a first rate tragedy is quite affecting. The harsh reality that terrorism shapes our modern world everyday is certainly undeniable. The 270 victims of this one act of violence were global citizens of 20 different nations. “Hatred is love that is injured” was the inclusive and connecting thread to each facet of the story. “You cannot reason with grief” regardless of your background, station in life, county of origin or pedigree. Poignant in it’s delivery, the aspirational laundry project at the heart of The Women of Lockerbie will stay with you long after you have left the theater. 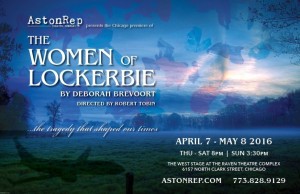 AstonRep’s The Women of Lockerbie is now playing at Raven Theatre Complex through May 8, 2016