The Woodsman is a Must See Piece of Theatre 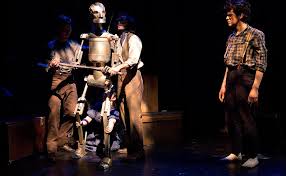 The Woodsman is a Must See Piece of Theatre

Good theatre doesn’t always need words. Imagination, puppetry and body language can go a long way. Such is the case with Strangemen & Co. and James Ortiz’s The Woodsman, returning to the 59E59 theatre space. The story is how the Tin Man from the Wizard of Oz became who he is, but it is also the story of man vs. the machine, progress over simplicity and bad things happen to good people. The fantasy starts with the incredible set of painted woods and suspended mason jars, lit by green bulbs. I am going to assume is Liz Lundberg created this visual magic, but I am sure had help with James Ortiz, who not only wrote the piece, but directed, stars and did the exquisite puppets that bring simplicity to life. The ravens are wings suspended feathers that flap like a flock ready to descend. The Witch of the East is a piece of fabric with sticks for arms as it grows life like and scarily very real. The Lion is shadow puppetry which escalates to New Orleans puppet flare, that the ensemble whips into frenzy.

The plot is simple The Wicked Witch of the East (Sophia Zukoski, Amanda Lederer) is making the munchkins lives miserable, so some rebel. One couple (Lauren Nordvig and Will Gallacher) to rebel have a son named Chopper (Ortiz) who falls for the witches slave girl Nimee (Eliza Simpson). When the witch finds out she curses Chopper’s axe to turn on him. One by one he loses his limbs to be replaced by machinery. In the end Dorothy arrives and the Wizard of Oz begins anew.

what is the most striking part of this piece is the message of if you face your fears, you will find they are more afraid of you.

Strangemen & Co is a company to definitely watch. They present theatre in its truest form and make us realize it doesn’t take millions of dollars to put on a good show. Their attention to detail, imagination and storytelling makes me say “Into These Woods.”