The Yiddish Fiddler on the Roof is Naches (joyous!) 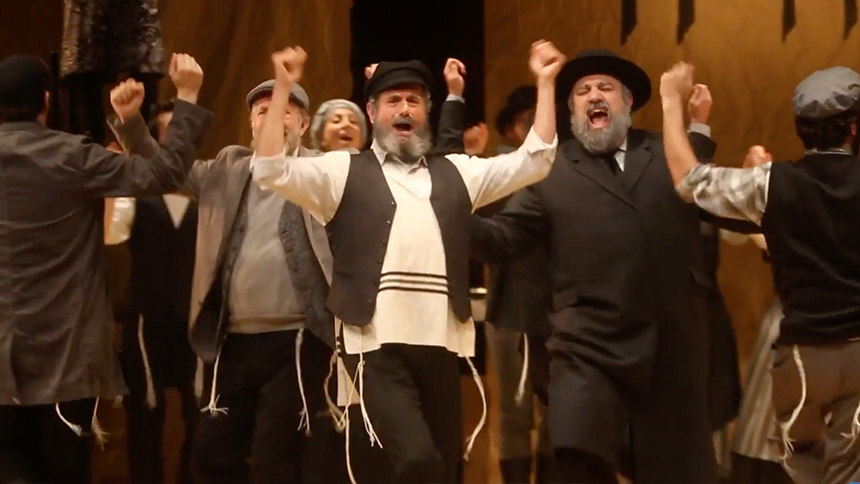 The Yiddish Fiddler on the Roof is Naches (joyous!)

The Yiddish Fiddler on the Roof, now playing at Stage 42, seems more connected, powerful, and in touch with the emotions that brew underneath the surface of this masterpiece. Never having been a fan of reading my visual entertainment, I was wary of not connecting fully to this production, yet it seems like it was written to be done in its native tongue. This is not the Fiddler you are used to, and yet, with Joel Grey’s direction and the casting of Steven Skybell as Tevye, we see the show in a new light. Skybell does not play this role for its comedic moments. His “If I Were a Rich Man”, “Ven ikh bin a Rotshild,” becomes his tryst with God. Skybell’s layered performance brings out Tevye’s gentler side. When seeing the love his daughter Hodl (Stephanie Lynne Mason) has for Pertshik (Drew Seigla), Tevye achingly asks Golde (the wonderful soprano Jennifer Babiak) “Do You Love Me?” He really does want to know. It becomes a moving conversation, between two people who never even thought to ask this question. The most heartbreaking moment is when his daughter Khave (Rosie Jo Neddy) wants her father to forgive her. We see and feel his devastation at not being able to accept this final blow to his traditions. The marriage of Grey’s direction and Skybell’s performance shines like a beacon of love, warmth, and tenderness.

This revival of Jerry Bock, Sheldon Harnick, and Joseph Stein’s will engage your heart. The translation by Shraga Friedman seems to have gone back directly to Sholem Alecheim’s original source material “Tevye the Dairyman”. In doing so, it captures the essence on the Broadway musical but has the spirit of what the real Anatevka was like. We see the insidiousness of the pogroms approaching and the lives that were interrupted and destroyed. In the case of this Fiddler, one particular family and those whose lives made up their circle. The fiddler (Lauren Jeanne Thomas) becomes the past, the present, and the ghost of what is to come. She is the spirit of hope and loss all in the same breath.

There is so much joy in this production and the choreography by Staś Kmieć who uses Jerome Robbin’s original choreography adds to it with his new infusion. They dance because there are no longer words and words are not enough.

For those who do not know this story, we follow Tevye (Skyball), whose world is changing all around him. Despite being a man of God and of traditions, he realizes that he must change. It starts with Tsaytl (Rachel Zatcoff), who wants to marry the extremely poor Motl, a tailor (the perfectly cast Ben Liebert). Though meek, with Tsaytl’s love and strength he stands up to Tevye to earn her hand in marriage. This is not easy for Tevye, as the night before he has promised her to the wealthy Leyzer Volf (Bruce Sabbath). He then has to convince his wife and does so through a dream ballet. During Tsaytl’s wedding, Tevye breaks tradition by allowing the women to dance with the men, as the horror of what is to come interrupts the proceedings.

Next Hodl, wants to marry a poor student, who is also a revolutionary. He agrees after seeing just how much she loves him.

Then his daughter Khave falls for Fyedke (Cameron Johnson) one of the Russians on the other side and that becomes too much for Tevye too bare. As this last blow is dealt, the town learns it must pack up and go or be killed. So with broken hearts, they move towards the next chapter, where ever that may be.

The cast is uniformly good with Skybell and Babiak the best Tevya and Golde I have ever seen, and I have seen this show a lot. This production is a transfer from The National Yiddish Theatre Folksbiene and though well-acted, I would have liked a stronger singer on “Far From The Home I Love”.

Under Grey’s direction, the show has an emotional clarity. Grey has brought out the humanity and has made this man and his family so relatable.

Beowulf Boritt’s set is sparse, but it does the trick and allows the lighting by Peter Kaczorowski to set the mood. Ann Hould-Ward’s costumes seamlessly blend the past and the present together.

Motl Didner’s English and Russian supertitles allow you to read the text if needed, but this production is so clear, that it really becomes a habit rather than need.

This Fiddler on the Roof is like a fine meal, completely satisfying. Bravo to Hal Luftig and Jana Robbins and the rest of the producers for bringing this marvelous production uptown and allowing a broader audience to revel in its brilliance. This is a Fiddler for the ages.