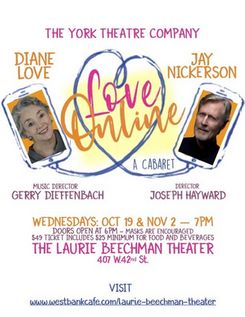 The York Theatre Company (James Morgan, Producing Artistic Director; Evans Haile, Executive Director), dedicated to the development of new musicals and rediscovery of musical gems from the past, has announced a limited engagement of Love Online, a cabaret conceived and scripted by Diane Love, featuring songs from Broadway to Country. Love Online has two performances on Wednesday October 19 and November 2. All performances are at 7PM with doors opening at 6PM at the Laurie Beechman Theatre (407 West 42nd Street, on the corner of 9th Avenue).

Love Online is a cabaret featuring Diane Love and Jay Nickerson as two aging singles expressing their feelings, hopes, and ultimately love – in song and conversation. Her character has recently ventured into the world of online dating, leading her to a jaded bachelor, just about ready to throw in the towel. Accompanied by Gerry Dieffenbach on the piano, the thirty songs performed run the gamut from Broadway to Country, with many duets juxtaposing unlikely musical combinations. Love Online features the music of Stephen Sondheim, George and Ira Gershwin, Burt Bacharach, Duke Ellington, Patsy Cline, Kander & Ebb, Willie Nelson, and many others. Inspired by friends and acquaintances who found love online, Diane Love has woven songs from the American songbook with country ballads in order to bring her characters to life.

Join The York for the premiere of Love Online on Wednesday October 19th, and the subsequent performance on Wednesday November 2nd. Performers Diane Love and Jay Nickerson, and music director Gerry Dieffenbach, have previously collaborated on another of Love’s original cabarets, Marriage, The Ups and Downs in Song. The trio has reunited to present Love Online, joined by director Joseph Hayward.

Love Online will run following the performance schedule: Wednesday October 19 and November 2 at 7PM, with doors opening at 6PM.

Tickets for Love Online are currently available at https://www.westbankcafe.com/laurie-beechman-theatre.

Diane Love (Conceiver/cabaret singer). Actor, artist, cabaret singer, and writer Diane Love has appeared off Broadway in Pinter’s Ashes to Ashes, under the direction of Austin Pendleton. As an artist, she is represented by two Manhattan galleries. Her eponymous store on Madison Avenue was a destination for all who collected her unique designs for both fashion and the home. She is also the author of _Yes/No Desig_n, a book guiding readers through crafting their own personal style, which was published by Rizzoli.

Jay Nickerson (Cabaret singer). Actor, writer, teacher, coach, and singer Jay Nickerson is known for the films Living and Dining (2003) and The Guest at Central Park West (2009). He has appeared off Broadway as Henry Higgins in Pygmalion and Inspector Ascher in Perfect Crime, the longest-running straight play in NYC history. Nickerson has toured nationally in Cotton Patch Gospel and A Christmas Carol. Regional roles include Jay Gatsby in The Great Gatsby, F. Scott Fitzgerald in Scott and Zelda The Beautiful Fools, and Clarence Darrow in Never the Sinner. He has two grown children, a loving spouse, and a ridiculous dog.

Gerry Dieffenbach (Musical director/accompanist). Gerry Dieffenbach is a singer, songwriter, pianist, and musical director with many accolades. He has twice received the Songwriters Guild of America President’s Award, the Backstage Bistro Award for Outstanding Musical Director, CAB Magazine Award for Sustained Achievement, and Critics Choice Award for Outstanding Album Of The Year for his CD of original songs “Well Informed.” He performs in New York clubs weekly and has appeared at venues including Town Hall (NYC), Westbury Music Fair, Atlantic City and London’s Wembley Arena.

Joseph Hayward (Director). Joseph Hayward is the Director of Theatre and Live Events as well as the Associate Producing Director at The York Theatre Company in Manhattan. His recent credits include Desperate Measures at Saint Michael’s Playhouse, And Then There Were None at The Moss Theater, You Can’t Take It With You at The Hudson Guild Theater, Remembering Jerry Herman with Lee Roy Reams at The York. His work as an Associate and Assistant includes over 40 theatrical productions, most notably at Carnegie Hall, The Lincoln Center, Arthur Ashe Stadium, and The Pioneer Theatre Company.

Stephen SorokoffSeptember 25, 2022
Read More
Scroll for more
Tap
My View: I Want To See This Cabaret Show Again!..Erich Bergen at Cafe Carlyle
You Are There at The New York Pops Underground Cabaret Fundraiser