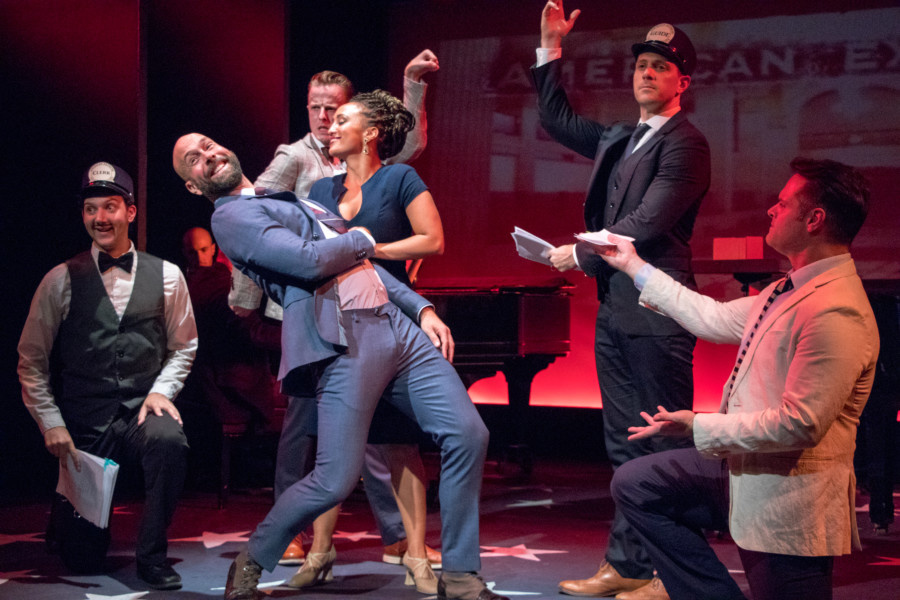 Fifty Million Frenchmen is Cole Porter’s 1929 Broadway musical. “You Do Something To Me”, “You Got That Thing”, “Find Me A Primitive Man” and “The Tale of The Oyster” all come from this show. There are over 20 Porter melodies to revel in.

The show is charming. Set in Paris, the story concerns the exploits of wealthy Peter Forbes (Andy Kelso), who bets his friend Michael Cummings (David Michael Bevis) and Billy (Cole Burden) that he win Looloo Carroll (Evy Ortiz sounding like Kathryn Grayson) the girl he adores from afar without using any of his money or connections.

Looloo is in Paris with her parents (Karen Murphy and and very funny Ray DeMattiss) and her best friend Joyce (Madeline Trumble).

In his first job is as a tour guide, Peter catches the eye of Violet Hildegarde (Kristy Cates), a fur-buyer (“Where Would You Get Your Coat?”) and an aspiring singer, May DeVere (the fabulous Ashley Blanchet).

At the racetrack a sure bet loosing has Peter thinking he has lost and tears up his ticket and LooLoo’s. However due to a technicality the horse wins. Looloo thinking he has done her wrong, leaves him.

Pernasse (Wade McCollum) the head of the hotel prepares a party for Looloo’s mother, who wants her daughter titled, but Looloo does not attend, she has no desire to marry a Grand Duke.

After trials and tribulations Peter wins Looloo, as boy gets girl and happily ever after’s ensue.

The cast sings wonderfully and dances well with the choreography by Trent Kidd. Ashley Blanchet and Wade McCollum prove there are no small roles, as they walk away glowing in their roles.

The book by Herbert Fields, adapted by Tommy Krasker and Evans Haile is clever, especially in the hands of director Hans Friedrichs (The Drowsy Chaperone). Evans Haile, David Hancock Turner on second piano and Dan Erben on banjo make the orchestrations sound fully fleshed out.

The Cole Porter series honors the illustrious songwriter behind Anything Goes, Kiss Me, Kate, Gay Divorce, Silk Stockings, Red, Hot and Blue, and Can-Can and it is not to be missed if Fifty Million Frenchmen is any indication of what’s to come. Next up The Decline and Fall of the Entire World as Seen through the Eyes of Cole Porter, October 12th – 20th