Theater: All The Moving Parts With Adrian Bryan-Brown, Publicist and Joan Marcus, Photographer 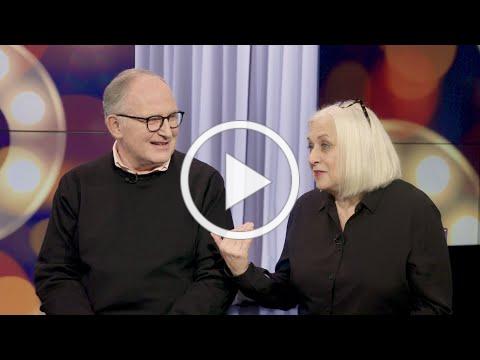 Theater: All The Moving Parts With Adrian Bryan-Brown, Publicist and Joan Marcus, Photographer

Broadway power couple, publicist Adrian Bryan-Brown and photographer Joan Marcus, are featured in this episode of “Theater: All the Moving Parts”, hosted by Patrick Pacheco. Adrian is a publicist who, with his business partner, Chris Boneau, runs a press office which has been responsible for over 400 award-winning productions. Joan has photographed hundreds of plays and musicals, on Broadway, Off-Broadway and around the world. And they share the distinction of being the first couple to be awarded individual Tony Honors for their contributions. Hear them tell delightful stories about how they respectively do their best work as they try to maintain a sane home life. The show dazzles with Joan’s photographs of top plays and musicals, among them The Ferryman, The Rose Tattoo, and Hamilton.

Pacheco says, “I was struck by how Adrian described his role as a ‘consigliere’ to his producers, sharing their passion but also acting as a reality check for what it will take to reach Broadway hit status. Joan often comes into a production at one of the most vulnerable moments in the process, in the final days just before performances begin and nerves are frayed and taut. It calls for patience, a thick skin, and little ego. Some of her best photos won’t see the light of day because of actors’ fragilities.”
“Theater: All the Moving Parts” is a new CUNY-TV show, featuring in-depth interviews with top theater artists including playwright Theresa Rebeck, musical director Casey Nicholaw, intimacy director Claire Warden and choreographer Sergio Trujillo. Of Pacheco, Rebeck said, “I felt like I was being interviewed by someone who knows me better than I know myself.”  Go to Theater: All the Moving Parts to see these and other episodes.

Patrick Pacheco is an Emmy-winning commentator and journalist whose work has appeared in The New York Times, The Los Angeles Times, The Wall Street Journal, Esquire.com, and many other periodicals. He wrote the 2009 Disney documentary “Waking Sleeping Beauty,” and is the co-writer, with Maria Cassi, of the play, “My Life with Men…and other animals.”  He is the writer and editor of the Amazon best seller “American Theatre Wing, An Oral History: 100 Years, 100 Voices, 100 Million Miracles.”

Adrian Bryan-Brown is a proud member of the Association of Theatrical Press Agents and Managers for more than 20 years. With his business partner Chris Boneau, Adrian has represented over 400 plays and musicals which have won 222 Tony Awards and 11 Pulitzer Prizes (a list of the Broadway shows can be found at www.ibdb.com) and consulted on productions around the world. He has taught theatrical public relations as an adjunct professor at Brooklyn College and is married to the theatrical photographer Joan Marcus.

Joan Marcusis one of the preeminent theatrical photographers working in the US today. Over the past 25 years she has photographed over 500 shows on and off Broadway and regionally. A native of Pittsburgh, Pennsylvania, Joan graduated from George Washington University. In 2014 she received a Tony Honor for Excellence in the Theater.
Streaming on Theater: All the Moving Parts starting December 23rd.