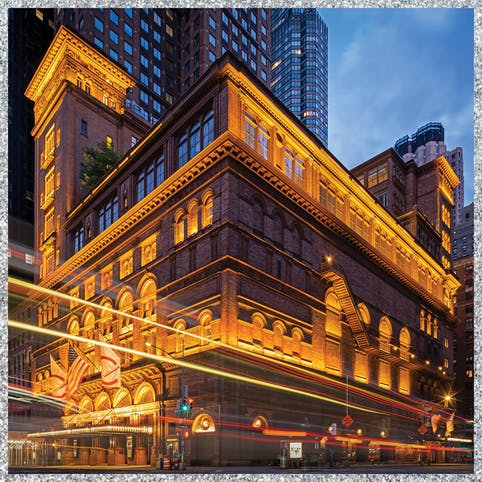 For 130 years, Carnegie Hall has played a vital role in America’s cultural landscape. They are marking this milestone with a truly historic event, exploring the Hall’s place as the home for the best in music and showcasing its continued prominence today. Join them Wednesday, October 7 at 7:30 PM (Eastern) as they celebrate the beauty, excitement, and diversity of Carnegie Hall past and present with Carnegie Hall’s Opening Night of the 130th Anniversary Season: A Virtual Gala Celebration. The evening’s program will be free to view online, with additional benefits for gala supporters.

The York kicks off its fall season of virtual events next week with a live Show (and Tell!) reunion of its award-winning 1994 production of Stephen Sondheim and George Furth’s poignant and emotional musical comedy Merrily We Roll Along (1994). Join director Susan H. Schulman, York’s James Morgan, theater historian Charles Wright, and cast members Danny Burstein, Malcolm Gets, Adam Heller, Christine Toy Johnson, Cass Morgan, Amy Ryder, and more for a visit to another landmark York production (and our first cast recording). A Zoom link will be provided in your order email confirmation.

Piano Bar Live! A Night At The Beechman – Streams Tue., September 2. Featuring new performers with every show at 7:15 pm ET, with hosts Scott Barbarino and Michael Kirk Lane with A Night at The Beechman.

PBL! is proud to continue the long-established tradition of the piano bar—that special place where we can gather, entertain, support and create, as we connect with live music. Best of all, PBL! is the the unique chance to see veteran performers pass the torch to the next generation of blossoming young talent. The line-up always features a mix of veteran and rising star performers from the world of piano bars, cabaret and Broadway.

Ex-Rockette, Mom of 2 sons in the 7th & 10th Grade, is teaching them online and showing the true balancing act of Motherhood, Acting and How She Is Keeping it All Together.  “Mother of the Week” Film Written by and Starring Jennifer Jiles Available

Jennifer Jiles the 2X Best Actress Award Winner and Breakout Performance Winner for “Mother of the Week”, a story of a stressed-out working mom determined to be everything to everyone, no matter what the circumstances.

She plays STACEY, a 41-year-old career woman has it all together – with the invaluable help of her children’s perfect (inside and out) nanny, MARISA (Lexi Zettle), whom the three kids love, and Stacey’s husband TIM (Mark Lobene) doesn’t mind looking at either. When Marisa takes a week vacation, Stacey is happy to prove herself and reassert her own role as Mom and sexy wife. Easier said than done – Stacey finds that without Marisa’s help, taking care of family and work is a little more than she can handle.The cast includes, Jennifer Jiles, Mark Lobene, Lexi Zettle, Mary Ann Cok, Steven Cutts, Nicholas Foti, Randi Kaplan, Simone Lazer, Alessia Pizza and Anthony Pizza. “Mother of the Week” is Directed by Lee Davis and Produced by Mark Lobene Most recently, she won The Best Actress Award for the Long Short Film, “Beauty”. The film also received 2 othernominations, Best Long Short, Andrew Schwarz as Best Director at the Hang Onto Your Shorts Festival 2020.The Cast includes: Jennifer Jiles, Mark Lyons, Katharina Schmidt and Ron Maestri.Jennifer has be seen on CBS’ “Bull” and Netflix “Jessica Jones”, iHeart Radio NY Times Top 10 podcast “Lethal Lit” and as the hero in an “Eliquis” National Network Commercial. Recently cast in the comedy feature “My Sister’s Wedding”, Written and Directed by Ken Franklin, shooting Spring of 2021.
Her other filmwork includes being a 5X Best Actress Winner for “The Waiting Room” and is the 2X Best Actress Winner for “The Choice”. In 2018, she was presented with the Honorary Acting Achievement Award in New Jersey.She is an Emmy Award Winner as the host for “DYNAMETS!” the NY METS Baseball Show for Kids. One of the highlights was singing the National Anthem at Shea Stadium.In Jennifer’s one woman show that she wrote and performed in, “KICKING AND SCREAMING”, The Musical!” , she exhibits both her versatility and vulnerability. She steps out from behind the kickline and brings 21 original characters to life in her true story as an Ex-Rockette. She is also a Humanitarian, who is actively involved in several charitable ventures benefiting children, including: Make A Wish Foundation, The Viscardi Center and Abilities! in Albertson, NY and The Valerie Fund.