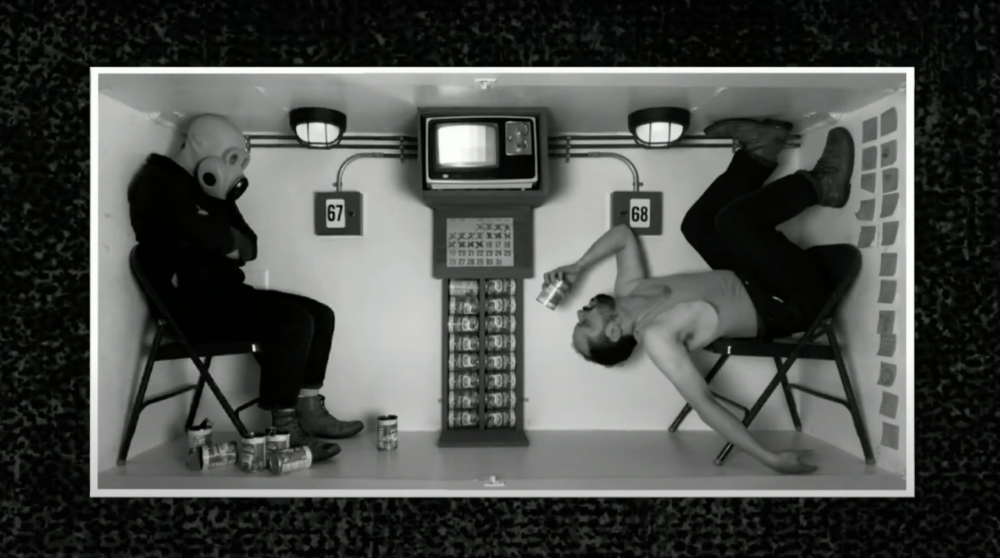 From His Home Closet, Theater in Quarantine continues to push the boundaries of live performance inside the digital space.

Theater in Quarantine, a new performance laboratory from writer/director/performer Joshua William Gelb, is proud to announce a new series of live-streamed performances dedicated to the exploration of the theatrical experience inside the digital space. Running through September 12, new works premiere every other week on Gelb’s YouTube channel followed by a live chat with Gelb about the challenges of making work in isolation.

Closet Works is presented by the Invisible Dog Art Center with additional support from Mamie Kanfer and Justin Stewart.

Theater in Quarantine debuted its most technically ambitious production to date with The 7th Voyage of Egon Tichy, a slapstick science-fiction adventure adapted from Stanisław Lem’s Star Diaries created with director Jon Levin and writer Josh Luxenberg (Sinking Ship’s Drama Desk Nominated A Hunger Artist). When space traveler Egon Tichy’s ship gets hit by a chunk of interstellar detritus, sending him careening into a minefield of time vortexes, a series of increasingly absurd events makes his chances of fixing things ever less likely, and even the simplest task becomes infinitely complicated.

Time stops for a Jewish playwright sentenced to death during the Nazi occupation of Prague in Footnote for the End of Time, a new retelling of Jorge Luis Borges’ classic short story The Secret Miracle, which premieres on August 27. Created in collaboration with composer Alex Weston (The Farewell), this new translation sets Borges’ words to verse with an accompaniment inspired by Olivier Messiaen’s Quartet for the End of Time, itself composed in a Nazi POW camp.

As New York City begins to reopen amid vital protests and the threat of a second wave looms, Theater in Quarantine remains dedicated to producing new live experiences while brick and mortar theaters remain closed.

Shortly after the coronavirus pandemic closed all theaters in mid-March, Gelb transformed a 2′ x 4′ x 8’ closet inside his East Village apartment into a white-box theater. Gelb says, “When everything shut down, I set out to adapt to the digital form without sacrificing the integrity of the live event. How can we artfully push against the boundaries of this new social distance to theatrically embrace the limitations of remoteness? What we might consider our shared theatrical values? And how might we continue to collaborate responsibly even while we social distance?”

Starting on March 30, Gelb and his collaborators started releasing pre-recorded studies in movement, clown, camera orientation, and perspective — building towards more complex theatrical experiences. On April 23, they premiered Theater in Quarantine’s first live-stream performance: an adaptation of Kafka’s The Neighbor which has been followed by an unauthorized edit of Beckett’s Krapp’s Last Tape and collaborations with artists like Scott R. Sheppard (Underground Railroad Game), Nehemiah Luckett (Jazz Singer), and Ellen Winter (36 Questions).

“I often think about Peter Brook’s invocation of the empty space when standing in front of my closet,” says Gleb. “How can this utilitarian container, so uncomfortably small, so disproportionate in its aspect ratio, become a stage for the imagination? And it’s here I find the central metaphor, and perhaps appeal, of the entire project — it’s about as obvious as you might expect — that my attempts not only to make art in this confinement but to exist whatsoever, are not so dissimilar from what many of us are experiencing. There is frustration, and boredom, and lots of loneliness. But there is also great potential and for once an expanse of time that we have the chance to fill not with mere anxiety but with the thoughtful, rigorous creative impulse.”

Joshua William Gelb is an East Village-based director, performer, and librettist currently building theater out of his converted closet christened the Theater in Quarantine. Prior to the pandemic, Gelb created the musical interrogation of the 1927 Al Jolson film Jazz Singer (New Yorker critic’s pick) which was commissioned and built-in residence at Abrons Arts Center with Nehemiah Luckett. Previously in residence at Abrons, Gelb conceived and directed the sesquicentennial anniversary reimagining of America’s supposed first musical The Black Crook (NYT Critic’s Pick), about which he lectured at Harvard University’s Houghton Library. His Drama Desk-nominated adaptation of A Hunger Artist, created with Sinking Ship, continues to tour. Other work has been presented at Ars Nova, LMCC Process Space, New Ohio, Joe’s Pub, Polyphone Festival, and Target Margin. Gelb participated in the Lincoln Center Directors Lab, is an associate artist with Sinking Ship, and teaches Theater Collaboration at Cooper Union. Visit joshuawilliamgelb.com for more information.

Theater in Quarantine until September 2020 Season

Footnote for the End of Time August 27 at 7pm and 9pm Time stops for a Jewish playwright sentenced to death during the Nazi occupation of Prague in this brand new retelling of Jorge Luis Borges’ classic short story The Secret Miracle. Created for spoken word and chamber orchestra, this new translation sets Borges’ words to verse with an accompaniment inspired by Olivier Messiaen’s Quartet for the End of Time, itself composed in a Nazi POW camp. Footnote for the End of Time features text by Joshua William Gelb, music by Alex Weston, and direction by Jon Levin.

RossNovember 30, 2021
Read More
Scroll for more
Tap
Streaming the Intergalactic Ridiculousness of #TheaterInQuarantine & Sinking Ship’s Brilliantly Funny The 7th Voyage of Egon Tichy
What To Watch Aug 2nd To Take Away The Blues