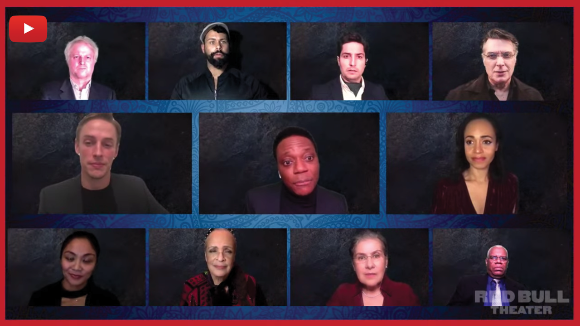 You can watch the recording until 7:00 PM EST this Friday, December 18 – then it disappears. Watch it at our website, HERE. It is also available directly at YouTube.

Today Thursday, December 17 at 7:30 PM EDT, we’ll host a BULL SESSION, an interactive discussion of A KING AND NO KING with director José Zayas, scholar Mario DiGangi, and some of the actors involved. Register to receive a link to participate.

Donations to the Off-Broadway League Toy Drive have accelerated in recent days. The Theater Center has seen an increase in deliveries from Amazon, Walmart, Buy Baby Buy and other online stores. When staff bring the toys to the shelter, the toys must be out of their shipping boxes. So, every day they get a series of deliveries, they open those cardboard boxes to reveal the toys inside – and it’s bringing about some unexpected smiles.

“It started with our small staff here,” says Catherine Russell, organizer of the toy drive. “We loved opening a box and seeing what toy had come. Then our somewhat dour box office treasurer broke into smile as he opened a box and pulled out a skateboard and some Legos. Another day we had a soaking wet, exhausted UPS guy come in. I asked, ‘Do you know who you are? You’re kind of like Santa Claus bringing us toys for kids in a shelter. Why don’t you open up this box you just brought in?’ He declined, but when I insisted, he opened the box, a huge smile came across his face, and he left the building smiling too – and that’s been the unexpected joy that’s come out of this toy drive.”

She added: “It’s bringing happiness in two ways. Certainly, the 125 kids in the shelter who will each get a present will be happy, but the adults donating and the hard working people who deliver those donations remember the joy a child feels when opening a present.”

The annual Off Broadway Toy Drive is virtual this year and benefits a NYC Department of Homeless Services family shelter in Times Square. This year’s goal is to raise 125 presents for 125 kids aged six months to 12 years old. Toys can be donated by purchasing on Amazon.com, Wal-Mart.com or any other online retailer and shipping it directly to The Theater Center, 210 West 50th Street, 4th floor, New York, NY 10019.

Donate a new unwrapped toy worth $10 or more and you will receive a voucher for a free ticket to a participating Off-Broadway show of your choice when theaters are allowed to reopen in 2021. Those donating a toy through Amazon, Walmart or any other online company should e-mail the confirmation to offbroadwaytoydrive@gmail.comand in return, you will be emailed a voucher enabling you to redeem one free ticket to any participating Off-Broadway show in 2021. Participating theaters will be announced when reopening dates become clearer. Vouchers will have no expiration date.

The Theater Center will also accept in person drop offs for those in the local area. Toys can be dropped off on Mondays through Fridays between10:00AM – 6:00PM or on Sundays between 10:00AM – 1:00 PM. Only one person at a time will be allowed to drop off and must adhere to all safety protocols in place.

Here’s how it works:

Lydia (Aja Naomi King) and Henry (Jason Butler Harner)’s dinner guests (Madeline Brewer and William Jackson Harper) are about to arrive when Henry’s spontaneous marriage proposal threatens to burn the evening to a crisp. Wine bottles and years of unspoken tensions are uncorked, and, before the evening is through, Lydia must confront her long-held fears and feelings if she’s going to commit to a future with Henry. Directed by Whitney White, Stacy Osei-Kuffour’s world premiere comedy marches into the muddy intersection of romantic entanglement, identity, pride, and survival.

Forged during and in response to a fraught moment in history, the unprecedented collaboration between Williamstown Theatre Festival and Audible Theater preserves the Festival season in a different format, provides continued work for the artists involved in the Festival season, and produces a body of work that will be made available for global Audible listeners to enjoy and experience. It also marks the first time that a theatrical season of work will be produced on Audible.

The rest of WTF’s 2020 season on Audible includes the Tennessee Williams masterpiece A Streetcar Named Desire and Photograph 51 by Anna Ziegler, both out now; the world premiere Chonburi International Hotel & Butterfly Club written by and featuring Shakina Nayfack, available December 29; and Dominique Morisseau’s Paradise Blue; the world premiere musical Row with a book by Daniel Goldstein and music & lyrics by Dawn Landes; and Sanaz Toossi’s world premiere Wish You Were Here – all to be released in early 2021.

Two writers. Two languages. Two colonial superpowers, linked by an explosion of theater-making and vital new questions of the individual imagination. Come hear how Lope de Vega, the author of more than a thousand plays, and William Shakespeare used the dynamic and populist form of theater to explore and interrogate the corrupt, militaristic, and misogynist monarchies they called home. With readings in English and Spanish by a cast including Isabel Arraiza, Tony Award nominee Raúl Esparza, and Danaya Esperanza, and commentary by Professor of Comparative Literature Philip Lorenz.

While Dublin theaters are not currently open under level 3 restrictions, Ireland’s Minister for Tourism, Culture, Arts, Gaeltacht, Sport & Media, Catherine Martin announced earlier this week that Theatre For One will begin performances, with additional safety measures, in a pilot test capacity. This is the first, and very important, step in creating a roadmap back for live theater performances in Ireland.

The upcoming engagement of Theatre for One is comprised of six five-minute plays by leading Irish playwrights Marina Carr, Stacey Gregg, Emmet Kirwan, Louise Lowe, Mark O’Rowe, and Enda Walsh, with each original five-minute play performed by one actor, for one audience member in a specially designed booth.