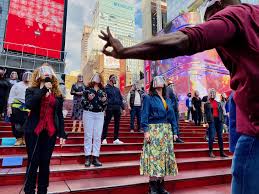 A group of New Yorkers are pulling together at a time when our city needs them the most. Their vision is to gather the resources and assemble the world’s greatest creative team to make the new New York even better than before. Wanting to position NYC as the creative and innovative city that will create its next great era through the resilience and creativity of its residents (those here + those still coming) NYCNext took to the red steps of Times Square.

NYCNext’s initial plan is to create and produce live pop-up events that bring creative energy and economic support to many neighborhoods in all five boroughs. In order to abide by social distancing guidance, we will not plan to promote these events ahead of time. However we will promote them extensively during (via live stream) and after the event.

Directed by the Pulitzer and Tony Award winning composer Tom Kitt and the Tony honoree Michael McElroy and an arrangement by James Sampliner and the Tony and Emmy winner Billy Porter provided the song arrangement, along with McElroy.

Sunday in the Park With George debuted on Broadway in 1984 with Ms. Peters in the lead role of Dot.

Cameron Mackintosh with First Night Records and Warner Music officially announce the new live cast recordings of the hit West End productions of Mary Poppins and Les Misérables – The Staged Concert.  Both are now available to pre-order at the links below with Mary Poppins (https://marypoppins.lnk.to/2020LiveCastRecording) being released on November 6, 2020and Les Misérables – The Staged Concert (https://LesMiserables.lnk.to/TheStagedConcert) on November 20, 2020.

Simon Oren, Chef Andy D’Amico, and Robert Guarino are feeding the community that has fed them all these years. Starting at 9pm every night of the week (starting next Monday), anyone with an Actor’s Equity card can eat for free (not incl. drinks, and if possible gratuity) at their bistro Bouillon Marseille, and Italian inspired Nizza, both located at 630 Ninth Avenue (44 Street).

For the past 20 years, these restaurants have been the home of many actors pre and post performances. Now, as the industry is decimated due to Covid-19, the three partners want to make sure that the arts community stays well fed.

There are no limits to what can be ordered, and no restrictions on how many times a person can eat throughout the week. The restaurant will keep a house account for each person who dines, and when theater returns to New York, and actors start working again, the amount owed can be paid off as slowly or quickly as possible, if at all. This sense of giving is exactly what is needed during this time, when humanity needs to kick in, and help each other survive during this pandemic.

Lia Vollack Productions and The Michael Jackson Estate announced today that, due to the Broadway shutdown, dates have been rescheduled for the upcoming World Premiere of MJ the new musical on Broadway. Performances are now set to begin in September 2021, at the Neil Simon Theatre, New York City. A new ticket On Sale date will be announced soon.

If you have purchased a ticket to MJ for any performance that has been delayed by the ongoing Broadway shutdown, you will be refunded by the point of purchase. Anyone who previously purchased tickets to MJ will be notified via email about pre-sale priority access to purchase tickets for the new dates.

Starring Ephraim Sykes, the Tony® and Grammy Award® nominee who has been cast as Michael Jackson, MJ will feature a book by two-time Pulitzer Prize® winner Lynn Nottage and a score made up of some of the best-loved, top-selling, and most iconic songs in recording history. Tony Award winner Christopher Wheeldon will direct and choreograph.

Suzanna BowlingSeptember 23, 2022
Read More
Scroll for more
Tap
What To Watch October 10th To Take Away The Blues
“ROCKERS ON BROADWAY: BAND TOGETHER – HONORING BILLY PORTER ANNOUNCES CAST OF PERFORMERS”