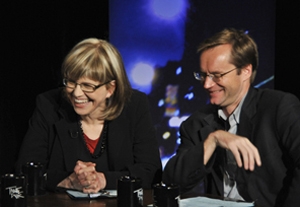 Theater Talk – the popular discussion show that has been a staple of New York- and later national- television for 26 years – will be ending as a weekly series. Executive Producer of Theater Talk Productions and co-creator of the show, Susan Haskins-Doloff, has announced an end to production of the program.

“The Best of Theater Talk,” previously taped segments, will continue to appear on public television stations WNET/WLIW through the end of October. THEATER TALK programs can also be found on YouTube and at www.theatertalk.org.

A STATEMENT FROM SUSAN HASKINS follows:

On Thursday, I voted in the New York State primary and after I scanned my ballot, Brian, the poll watcher, asked me when Theater Talk was coming back in the fall. “It’s not,” I told him and I realized that I just broke the story that I had yet to share with almost anyone else.

As many already know, we left our longtime studio, CUNY TV, at the end of last season. The new Interim Executive Director there no longer felt comfortable giving our independent production a berth at CUNY TV without taking over editorial and creative control. That didn’t work for us, so we moved on.

Over the past few months, my co-Executive Producer Steve Doloff and I looked for a producing partnership elsewhere that offered us both great production services we could afford and that essential creative and editorial control. Nothing we explored fit the bill.

However, as the summer progressed, I realized that I could also step back from doing a weekly program and instead take advantage of Theater Talk Productions’ archive. We have amassed a remarkable twenty-six and a half years of conversations with theater greats and the time has come to focus on doing something more special with them beyond making them available on YouTube at www.theatertalk.org.

It has been my privilege to create the weekly Theater Talk for so long, including 22 years on Thirteen/WNET and 11 seasons nationally distributed by Executive Program Services in a producing partnership with CUNY TV.  People tell me that the series made a difference and I like to think that is true. (Also, it was an honor to be nominated for three NY Emmys over the last four years and to win one in 2017 as the “Best Interview/Discussion Show.”)

We are grateful to all who supported us both with their funds and others with just caring so much about the program. I’d like to extend special appreciation to director/actor Stephen Ahern who made it possible for Michael Riedel and I to begin this work in the first place on public access television back in 1993.

My thanks also goes to all my other cohosts: Jesse Green, Elisabeth Vincentelli and Jason Zinoman of The New York Times, Michael Musto of NewNowNext, Adam Feldman of TimeOut New York, actor Julie Halston, Donna Hanover of Arts in The City, playwright/producer Warren Leight, Jan Simpson of BroadwayRadio, as well as Gordon Cox of Variety and Nancy Giles of CBS News Sunday Morning. Theater Talk succeeded because of the intelligence and wit they brought to the series all these years (as well as the glorious efforts of our production crew at CUNY TV).

Working in the theater is a labor of love. I am lucky (to quote the musical [title of show])to have been and still be “Part of It All.”

The Tony’s Are Back Virtually

What To Watch August 22nd To Take Away The Blues