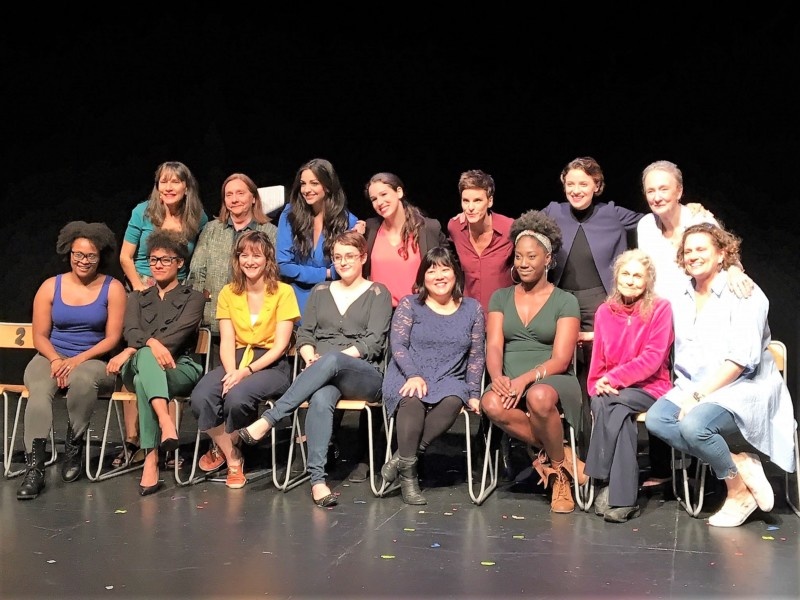 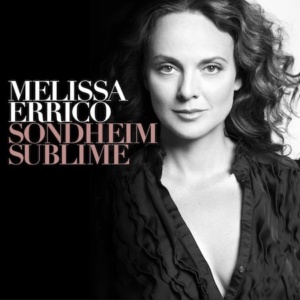 In Your Face–New York captures the spirit, the energy, the music, noise and creativity of this capital of the world. It’s a live performance extravaganza and a video/audio podcast that features the best of New York’s actors, writers, musicians and more.

This season kicks off on Wednesday, October 24th at 7:30pm with a show hosted by author and New Yorker writer Adam Gopnik and co-hosted by the boundary-pushing band BETTY. There will be performances by Tony-nominated Broadway star Melissa Errico, New York Times bestselling author Dr. Josh Bazell and Lisa Lewis, plus sketches by Sex and the City writers Julie Rottenberg and Elisa Zuritsky. Tickets can be purchased here.

Ghostlight Records will release Sondheim Sublime, the new album from Tony Award-nominated singer and actress Melissa Errico in physical, digital and streaming formats on Friday, November 2. Sondheim Sublime is produced by Rob Mathes (Sting) with Kurt Deutsch serving as and executive producer. The album is now available for pre-order at http://ghostlightrecords.com/melissa-errico-sondheim-sublime.html.

Errico shows us a side of Stephen Sondheim’s music that no singer has explored so completely before. It’s not the satiric or slyly disillusioned Sondheim – it’s the soulful Sondheim, the heartfelt, hungering Sondheim, author of songs of aching love and slowly dawning wisdom, the exalted, and reflective Sondheim: Sondheim Sublime. Accompanied by pianist Tedd Firth, Errico sings in a tone by turns hushed, electric and ecstatic, giving us a new understanding of the emotional intensity that has always equaled Sondheim’s virtuosic verbal magic. Renowned photographer Brigitte Lacombe photographed Melissa for the album cover art.

It’s a program of songs of love and life lessons, including a perfectly protective mother’s version of “Not While I’m Around” – while still having time for a provocative “Sooner or Later.” An album to place alongside her earlier Legrand Affair and Lullabies and Wildflowers as part of a uniquely lyrical and romantic library, Sondheim Sublime is an Errico album meant for the three-o-clocks in the mornings of the soul, when love is lost and wisdoms sought from one wise friend.

Melissa is best known for her starring roles on Broadway in the musicals My Fair Lady, Anna Karenina, High Society, Dracula, White Christmas and Amour which won her a Tony nomination for “Best Actress” and began a longtime association with its composer Michel Legrand. She has also been a recording artist and concert singer, releasing several solo albums and working with some of the world’s best symphonies and in jazz and cabaret spaces. More recently, she has been establishing a reputation as a writer, publishing essays in The New York Times and beyond. Television roles include the series Central Park West by Darren Star, recurring roles on Steven Soderbergh’s The Knick and Showtime’s Billions. Melissa has also recently finished shooting a role in The Magnificent Meyersons, an Eric Oppenheimer film with Kate Mulgrew. 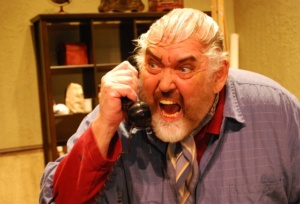 The Actors’ Temple will present Zero Hour with the brilliant Jim Brochu as Zero Mostel, directed by Piper Laurie, featuring John Fischer at the piano as their benefit. The building has had a miraculous transformation at its 101 years of age–come see the beautification project at this “Jewel of a Shul” and this fabuous show on Monday, November 5, 2018 at 7:30 pm at The Actors’ Temple (339 West 47th Streett, NYC). All tickets are $100 (include post-show refreshments) and available at www.theactorstemple.org/events.

Jim Brochu brings Zero Mostel back to life in ZERO HOUR. He re-creates the definitive backstory to this amazing performer’s appearances in such shows as “Fiddler on the Roof,” “A Funny Thing Happened on the Way to the Forum,” Mel Brooks’ “The Producers,” and many more. Brochu is both hilarious and poignant as he recounts Mostel’s big life – as a Broadway legend, a larger than life personality and the target of Hollywood blacklisting.
“Our historic Actors’ Temple has finally entered the 21st Century. We are thrilled to present Plays, Musicals, Weddings, Bar/Bat Mizvahs, Birthdays, any celebratory events imaginable. I am so proud of our ‘cool shul’ “, beams Carol Ostrow, Producer and President of the Temple.
++++++++++++++++++++++++++++++++++++++++++++

Following her 2015 Grammy®-winning Made in Brazil and 2017’s Latin Grammy®-winning Dance of Time, Eliane Elias returned with Music from Man of La Mancha, released April 13, 2018 via Concord Jazz. Recorded with two different trios—one that finds the piano virtuoso accompanied by bassist Eddie Gomez and drummer Jack DeJohnette and the other featuring Marc Johnson on bass with Satoshi Takeishi on drums, with Manolo Badrenajoining on percussion—the nine-track collection is a unique all-instrumental reinterpretation of songs from the legendary Broadway musical.

Music from Man of La Mancha marks the first time she has put her own spin on a specific set of songs from a Broadway musical. Elias’ 26th album in a highly distinguished career, Music from Man of La Mancha was recorded in 1995 and produced by Elias with co-production by Mitch Leigh, the late composer of the music for the original Broadway production. Elias ultimately focused on nine pieces including “The Impossible Dream,” as well as the show’s title track and such favorites as “A Little Gossip,” “The Barber’s Song” and “It’s All the Same.” All of the music was recorded live in NYC’s Power Station Studio and it was mixed at Leigh’s Secret Studio in New York City. “For the most part, we usually ended up using the first take,” she says. “That spontaneity and freshness when you first record something is hard to beat. Of course, the musicians were prepared and rehearsed. My choices as to which musicians played on which songs were based on the type of arrangements that I wrote. I played to the strengths of each trio. It brought beautiful and varied interpretations, different feels and colors to the music by having two different bassists and two different drummers.” Due to contractual circumstances, the album was not released at the time of recording, and Leigh has since passed away. 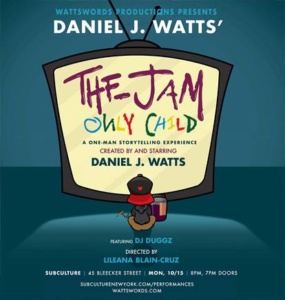 Only Child marks the reunion between Watts and director Lileana Blain-Cruz (The House That Will Not Stand, Pipeline) who received an Obie Award for her direction of The Death of The Last Black Man in the Whole Entire World, in which Watts played the title character. Only Child also features Jam mainstay DJ Duggz, aka Preston Dugger III (Motown the Musical, Memphis), spinning through the evening.

A play-on-words, The Jam pays homage to Watts’ great-grandmother who, after making jam from scratch, would share with others what she was unable to consume herself.  The Jam is Watts’ continuation of that legacy featuring his original spoken word, often set to music and/or dance.  This is Watts’ third instillation of The Jam: Only Child after sold out performances at Joe’s Pub in the famed Public Theater, and as one of the final acts to play the historic Webster Hall.

WattsWords Productions is dedicated to developing original programming including live performances, web content, and demonstrations written by Daniel J. Watts in an effort to urge communities to actively engage in focusing on their social similarities opposed to their differences. 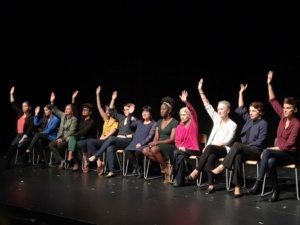 With only hours to rehearse (some of the “jurors” had Sunday matinees!), these exceptionally talented women made each “juror” their own.   In her remarks to the audience, Huffman stated  that the League of Women Voters was there to facilitate voter updates and registration, which drew enthusiastic applause from the audience and the actors on stage. “Reginald Rose wrote the original teleplay in1954, some 19 years before women could serve on juries in all 50 states. The female voices remind us how much change there’s been and how much more change is still needed,” Ms. Schneider said.  Schneider also revealed interest for future productions with all-female casts, followed by voter registration and outreach opportunities.

The Jurors:  (in alphabetical order):

Lynn Cohen – Mags in “The Hunger Games,” “Munich,” Magda in “Sex and the City,” Recipient of Richard Seff Award from Actors’ Equity Association

Jenn Gambatese – Broadway: School of Rock, Footloose, Hairspray, A Year with Frog and Toad, All Shook Up, Disney’s Tarzan, Is He Dead?

Caitlin Kinnunen – Upcoming: The Prom on Broadway, Original Broadway cast of The Bridges of Madison County

Dale Soules – Frieda in “Orange is the New Black,” Hair, Hands on a Hardbody, The Magic Show, The Crucible on Broadway

Ana Villafañe – Starred as Gloria Estafan in On Your Feet! on Broadway. Currently starring in Collective Rage: A Play in 5 Betties off-Broadway 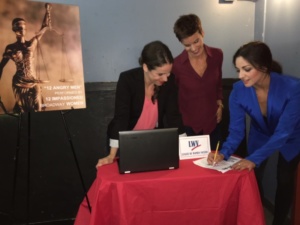