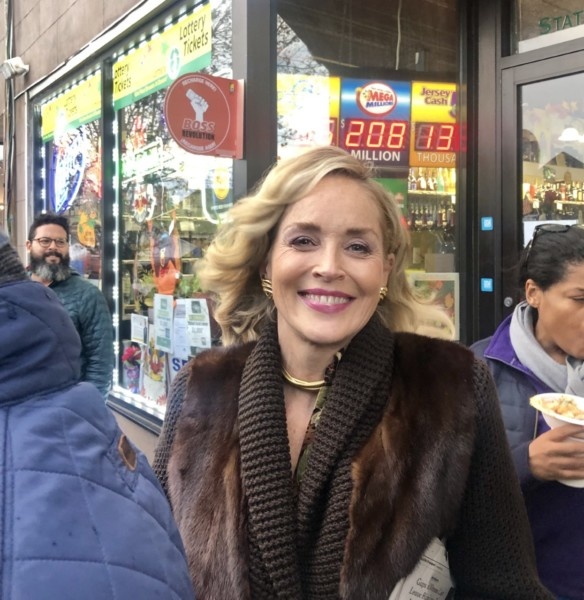 Netflix was filming a new series called “Ratched,” which is an origin story about nurse Mildred Ratched from the 1962 novel “One Flew Over the Cuckoo’s Nest.” T2C’s Brian Hester managed to get a great shot of Sharon Stone.

GHOSTLIGHT RECORDS andWARNER RECORDS will celebrate the vinyl release of Beetlejuice – Original Broadway Cast Recording with an exclusive in-store signing and performance at Barnes & Noble on Friday, December 6 at 4:30 PM. The album, also available on CD, digital download and streaming platforms, was released on vinyl as a two-LP picture disc set today, Friday, November 22. The event – which will include the show’s current Broadway stars Alex Brightman, Sophia Anne Caruso,David Josefsberg,Kerry Butler, Adam Dannheisser and Leslie Kritzer, in addition to the show’s composer and lyricist Eddie Perfect – will feature a performance of musical selections and an album signing. The store is located at 150 East 86th Street, between Lexington and Third Avenues on the Upper East Side.

The Beetlejuice vinyl edition builds upon the remarkable success of the album, which became the top streaming Broadway cast recording of the 2018-2019 season, after hitting 100 million streams earlier this month. “Say My Name,” one of the show’s breakout showstoppers, was chosen as Amazon’s “Alexa Song of the Day” last week. The incredible growth is a result of user-generated content on TikTok, where songs from the album have been used in over one million videos.

Tom Wopat will return to The Beach Café (1326 Second Avenue) on Monday, December 30 at 9:00 PM for a special Christmas concert. Coming on the heels of his five-week residency at the venue this fall, the evening will feature seasonal classics and holiday hits, including highlights from his recent album Home for Christmas. Wopat will be joined by his longtime music director Tedd Firth on piano, in addition to Peter Grant on drums, and Ed Howard on bass, with Wopat himself featured on guitar.

Primitive Grace Theatre Ensemble’s world premiere play A City of Refuge, written and directed by Evan Cuyler-Louison, at The Center at West Park (165 West 86th St., between Columbus and Amsterdam). The opening night is Sunday, December 8 at 8pm.

It’s the summer of 1992 and Washington Heights is on the brink of collapse following the deadly shooting of an unarmed Dominican man. Seeking solace, a local priest barricades himself inside his church, along with a small group of parishioners. As their numbers grow, tensions build both outside the church walls and in the sanctuary, threatening an already tumultuous City of Refuge. Inspired by the true events of the Washington Heights riots and the legacy of racial-fueled tension it left behind, this world premiere play set more than 30 years ago has never felt more relevant.

American Home by Stephanie Alison Walker is the first play regarding the housing crisis to be presented in New York – and quite possibly in this country. On Monday, December 2nd at 7:00 p.m. a FREE reading will be presented on at Theatre 54 part of Shetler Studios & Theatres 244 W 54th St, New York City. Reservations: https://www.universe.com/animus

One out of every 54 homes in America received a foreclosure notice in 2008.
Award-winning playwright and author of “Love in the Time of Foreclosure,”
Stephanie Alison Walker, takes audiences on a deeply personal journey through recent history as she shines a light on three out of the millions of stories of loss.

A young couple faces eviction from the dream house they stretched to buy;
an elderly widow falls prey to a reverse mortgage scheme; and a minister of the prosperity gospel must face the flock she’s led astray.

American Home takes an unflinching look at the impossible choices people make when faced with losing everything, and, ultimately, celebrates the powerful resilience of community and the human spirit.

Suzanna BowlingSeptember 23, 2022
Read More
Scroll for more
Tap
You Can Not Help But Be Moved Be The Inheritance
Jaime Lozano and The Familia Songs by an Immigrant Produces an Anthem of Resilience and Hope