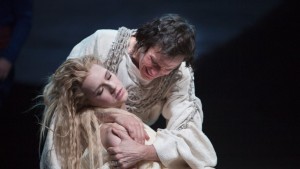 Shakespeare’s Pericles,is a wonderful story that is rich in romance. Along the line of Ulysses, there are multiple shipwrecks, losses that turn out not to be losses and heartache to true love withstanding. Christian Camargo, known for his role as Dexter’s brother and “Ice Truck Killer,” on the Showtime series, plays the title role of the prince. Add to that the director is none other than Trevor Nunn, who ran the Royal Shakespeare Company, the National Theater in England and is responsible for Cats and Les Miserable.

The Theatre For A New Audience production playing at the Polonsky Shakespeare Center in Brooklyn is beautifully staged, with a clean set design, by Robert Jones. A huge circular sculpture becomes a portal into the worlds, almost as if summoned by the Gods. Together with the exquisite lighting by Stephen Strawbridge we have been set into a mythical place where our fates are not our own. The story is narrated by Gower (Raphael Nash Thompson). Here Pericles (Christian Camargo) longs for a wife. His first stop is to Antiochus (Earl Baker Jr.) and his daughter (Sam Morales), who are in a incestious relationship. Pericles, learns of this when in order to win his bride, he must solve a solving a riddle that reveals the truth. Fleeing Pericles goes  to Tarsus, where the governor, Cleon (Will Swenson), and his wife, Dionyza (Nina Hellman), grateful for the food his ships bring to their starving people play a larger part as the story continues. Leaving Pericles becomes shipwrecked on the shores of Pentapolis, but fate leads him to his bride Thaisa (Gia Crovatin), the daughter of the king, Simonides (John Rothman). Hearing his kingdom needs him and with his wife heavily pregnant they board a ship, which leads to shipwreck number 2. In the midst of a storm Thaisa gives birth to a child, a daughter named Marina. Pericles is forced to bury his wife at sea. End of Act 1.

In Act 2 it is 16 years later. Pericles’ daughter, Marina (Lilly Englert), has been brought up by Cleon and Dionyza. When she outshines Dionyza’s own daughter Dionyza plots her death, but before Marina can be killed, she is kidnapped by pirates and sold into prostitution. Bawd (Patrice Johnson Chevannes) the owner of the brothel becomes enraged when Marina’s virtue has her most valued guest Lysimachus (Ian Lassister) repenting. Sweet talking Boult (John Keating) the brothel’s servant into getting her a job teaching, Marina is saved from having her virtue stained. Pericles shows up heartbroken, thinking Marina dead. The two get together, Thaisa who is alive, is also on this island thanks to the Goddess Diana and all’s well that ends well.

The biggest problem with this production is the casting is so uneven. Mr. Camargo is a bore, we do not care about him. He looks nice, but is so bland that it is hard to stay with him  for the required 2 hours and 45 minutes. The scene when he recognizes Marina, should have been heartbreaking and instead it was shrill as Ms Englert, though graceful was less than how Shakespeare describes her. Also as the narrator Mr. Thompson was too jovial and I wanted more from this role. Who excelled here were Nina Hellman, Gia Crovatin and especially John Keating and Ian Lassiter. These actors fleshed out their roles to captivate the audience.

Mr. Nunn has turned speeches into songs with the terrific PigPen Theater Co and compositions by Shaun Davey. As much as the music broke up the long speeches, either cut or manipulated by Mr. Nunn or dramaturge Jonathan Kalb, it doesn’t a cohesive piece make.

The visuals were glorious including the costumes, by Constance Hoffman and seeing this rarely produced piece was satisfying.

RossJanuary 3, 2023
Read More
Scroll for more
Tap
Welcome to Angel Reapers a Church Service Just This Side of Demented
The Oscars: The Winners, The Upsets, The Clothes