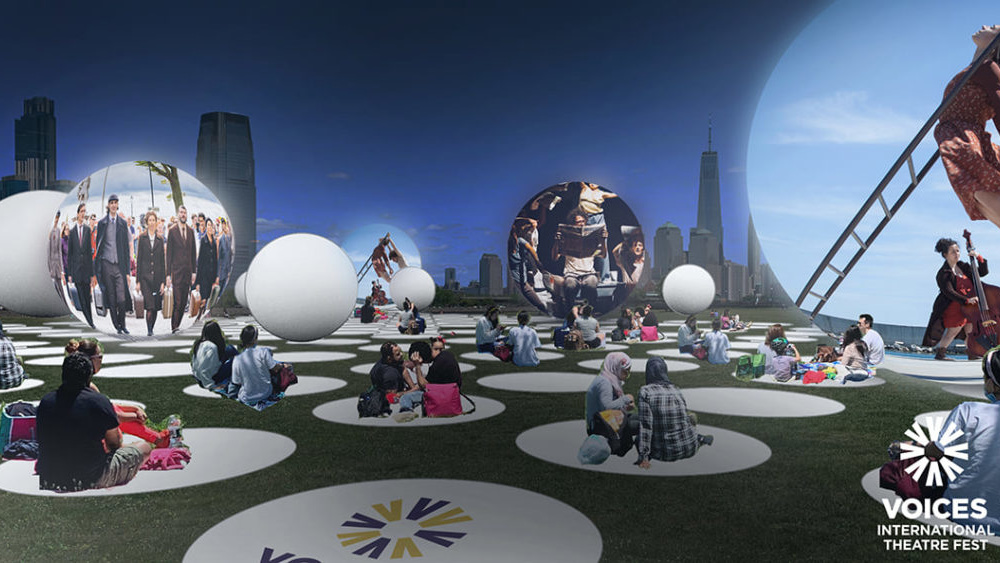 A number of notable productions are screening this week through Sunday as part of the 2020 Voices International Theatre Festival, produced by the Jersey City Theater Center (JCTC).  Here are a few highlights from among the 24 productions from 20 countries being show as part of the 10-day event. Visit www.jctcenter.org for details. 1/ “The Tin Ring” (England) – By Zdenka Fantlová, adapted by Mike Alfreds and Jane Arnfield.  A dramatization of the true-life story of Holocaust survivor Zdenka Fantlová, performed by Arnfield, and directed by Alfreds. One-woman performance in English.  Recorded performance. Sat Oct 24, 10am, talk-back with Arnfield following performance ($10)

3/ “Mönster Outside,” (USA) – Sidra Bell Dance. The award-winning, New York based choreographer by Sidra Bell, who calls herself a movement illustrato, performs a piece about the nature of outliers and constructed self-identity.  Performance dance.  Recorded performance. Sat Oct 24, 7:30pm ($10)

4/ “Chernobyl… At the Beginning and the End of Time”  (Russia) – Roman Viktyuk Theatre. Winner of the 2016 Golden Mask, conceived and directed by Roman Viktyuk. A family lives in the exclusion zone in Chernobyl following the nuclear disaster of 1986. Ensemble performance. Recorded, in Russian with English subtitles. Sun Oct 25, 10am ($10)

5/ “Myth,” (Israel) – Matara (producer). A play by Iddo Netanyahu.  An examination of the conflict of our times between society’s self-declared elites and its populace. Classic chamber theatre format, Recorded performance, in Hebrew with subtitles. Sun Oct 25, 2pm ($10)

Nearly all of the 24 productions being seen will have talk-backs with the artists immediately following the broadcast of their productions, giving audience members ample opportunities to engage with artists from around the world.

You are invited to review The Doo Wop Project: Live In Your Living Room (www.TheDooWopProject.com) , a virtual theatrical concert, broadcast live from Shubert Studios, on Sunday, October 25th at 7:00PM EST. The Doo Wop Project traces the evolution of Doo Wop from the classic sound of five guys singing tight harmonies on a street corner to the biggest hits on the radio today. The theatrical concert takes audiences on a journey from foundational tunes of groups like the Crests, Belmonts, and Flamingos through their influences on the sounds of Smokey Robinson, The Temptations, and The Four Seasons all the way to “Doo-Wopified” versions of modern musicians like Michael Jackson, Amy Winehouse, and Maroon 5. The Doo Wop Project: Live In Your Living Room is produced by Ken Davenport. Featuring stars of Broadway’s smash hits Jersey Boys and Motown: The Musical, The Doo Wop Project brings unparalleled authenticity of sound and vocal excellence to recreate-and in some cases entirely reimagine-some of the greatest music in American pop and rock history. The last five years have seen sold-out shows across the country and performances with everyone from Katy Perry to Jon Bon Jovi to Jay Leno. The Doo Wop Project has been seen in theaters across the country from Minnesota and Maryland to California and New Jersey. Their popular Symphonic Pops show has been performed with dozens of symphonies including Philadelphia, Indianapolis, Omaha, Vancouver, Detroit, and more.

The cast of The Doo Wop Project includes: Charl Brown (Motown: The Musical), Dwayne Cooper (Smokey Joe’s Café), John Michael Dias (Beautiful: The Carole King Musical), Russell Fischer (Jersey Boys), Dominic Nolfi (Jersey Boys), and Santino Paladino (Pippin). Critics are raving about The Doo Wop Project. The Chautauquan Dailysaid, “Doo Wop Project is street corner music for a new generation” and The Omaha World-Herald cheered, “Refreshing pop flavor… a rowdy standing ovation!” Nuvo Indianapolis applauded “lush orchestral arrangements,” and Maryland Theatre Guide praised the show saying, “The joy of the group’s performance was infectious and it was clear the guys were having as much fun as the audience.” Attendees will have the opportunity to interact with each other AND with The Doo Wop Project via a live chat, which will appear next to the video stream. Attendees can request songs to The Doo Wop Project in the chat. The Doo Wop Project is also offering a DANCING GUARANTEE.  That’s right, just like their live shows, they will GUARANTEE that audience members are up on their feet, dancing in their living room when watching their live stream . . . or they’ll get their money back.

The Actors Fund, the national human services organization for everyone in performing arts and entertainment, announced today that Grammy nominated songwriter and piano sensation Jim Brickman will be taking the nation by storm this holiday season with Brickman for Broadway Christmas Live. All proceeds from the virtual concert on November 28 at 8 pm ET and the album sales will benefit The Actors Fund. Broadway fans and their families can enjoy this unique virtual concert experience from the comfort of home, while supporting The Actors Fund and their COVID-19 relief efforts. Click here to pre-order Brickman for Broadway Christmas (including the Brickman on Broadway limited edition) albums ($29.99). Click here to for tickets to the Brickman for Broadway Christmas Live November 28 virtual concert (ticket packages start at $20).

After sold-out runs in New York, Washington, DC, and Chicago, the smart and witty, political parody, Political Idol 2020, written by Robert Yarnall and Marc Emory, directed by Michael Goldfried, with music direction by Anessa Marie will debut its newest 2020 edition on October 27. Tickets are $20.20 and can be purchased on PoliticalIdolLive.com.

Political Idol 2020 features 16 lyrically altered songs including “I Really Need Your Vote” (“I Hope I Get It “A Chorus Line)  “Strangers on the Right” (Strangers in the Night”), SEASONS OF TRUMP (Based on Jonathan Larson’s “Seasons of Love” from “Rent”), IT’S DIVERSION (Madonna’s “Like a Virgin”), FAKE (“I Guess That’s Why They Call It the Blues” by Elton John), KAMALA MEDLEY (“Karma Chameleon” by Culture Club) and many more.

In Bette Davis Ain’t For Sissies , Sherr channels 31-year old Bette Davis’ fight against the male-dominated studio system.  On the night of the 1939 Oscars, Bette Davis returns home knowing she’s to lose Best Actress to Vivien Leigh’s Scarlet O’Hara, because the press has leaked the winners.  Davis takes us on the bumpy ride of her tumultuous rise, as the tenacious actress fights her way through the studio system to the top. Witness Bette triumph over misogyny to win roles and compensation on par with her male counterparts. See what happens when someone who always wins…loses.

LIVE & IN PERSON POP UP SHOWS IN NEW YORK CITY:
•  Sun. October 25 @ 3pm EDT – Upper West Side/10025
These intimate live-and in person pop up shows will be presented using the LiveTours app and performed for an audience of 12. Ticket buyers must have a smart phone and headphones or earbuds. By downloading the app in advance, patrons will be able to clearly hear Bette while being able to maintain a safe social distance from her and other guests. The exact meetup location (as well as instructions and safety protocols) will be emailed to ticket buyers in advance of the performance. It is suggested that patrons bring their own pillow/blanket/portable chair for seating and wear comfortable shoes. Face masks must be worn at all times — no eating or drinking during the course of the event. In case of rain, refunds will be issued. Tickets are $20 each, available at www.bettedavisaintforsissies.com.

Bette Davis Ain’t For Sissies premiered at the New York International Fringe Festival in 2008 and has gone on to sold-out five-star runs at Edinburgh Fringe Festival over three consecutive years, a month-long run in Chicago, a US tour in 2015, and a run at St. James Theater in London. The show has been seen in 12 US states, including stops in Tuscon, San Antonio, Roswell, San Jose and Little Rock, among many others and in three countries. For more information visit bettedavisaintforsissies.com.