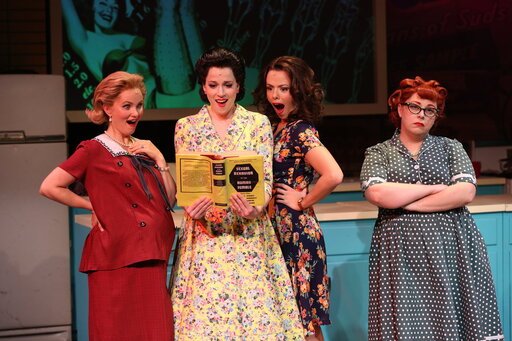 Join the York’s 2016 Off-Broadway premiere of the new saucy new musical Monday at 7pm: A Taste of Things to Come  with book, lyrics, and music by Debra Barsha and Hollye Levin, music direction by Gillian Berkowitz, and direction and choreography by Lorin Latarro, presented in association with Staci Levine and What’s Cookin’ LLC.

Streaming exclusively on Steller April 2, 3 and 4 Amour. Set in picturesque Montmartre, in the city of Paris. Dusoleil (Drew Gehling) is a nerdy civil servant but also a dreamer who discovers that he can walk through walls, which allows him to give bread and jewels to the deserving bourgeoisie. As he gains confidence to win over the beautiful Isabelle (Christiani Pitts) from her unhappy marriage, Dusoleil’s magical approach to life makes the world better for his co-workers and other Parisian locals.

In a time when we all feel stuck behind walls, Amour will transport you to a world of magical fantasy in a story about love, self-worth, and dreams coming true.

Grammy award winner Lauren Patten is set to kick off a new in-person concert series in New York beginning April 2. The breakout star of Broadway’s Jagged Little Pill musical will perform on the rooftop at Showfields for the TodayTix Original concert series.