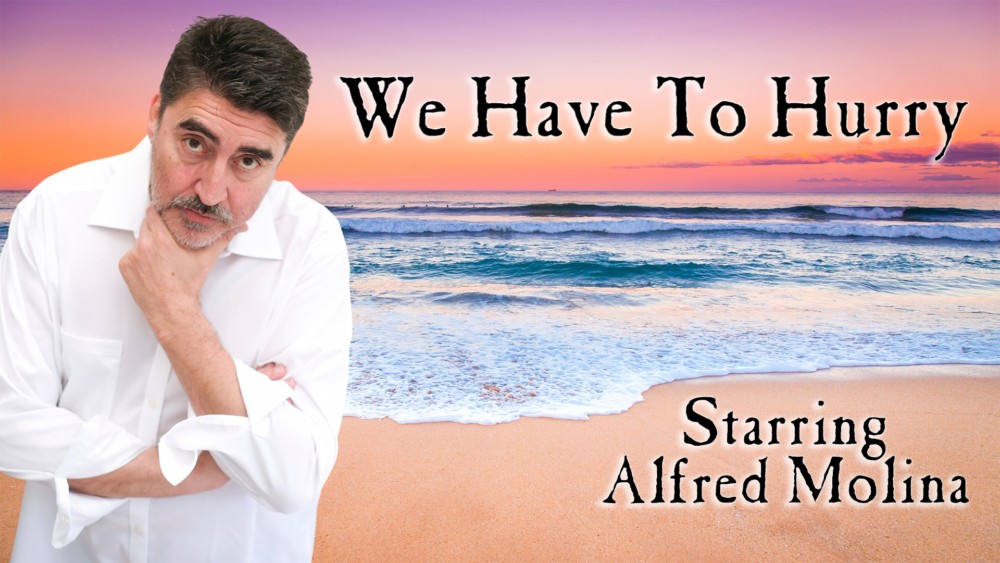 At a retirement community in sunny Cedar Key, Florida, septuagenarians Margaret and Gil are forced to be apart in their adjacent condos due to a mandatory isolation order for all residents.  From their neighboring balconies, love struck Gil witnesses Margaret’s increasing frustrations at their circumstances and realizes he must use his humor and wit to turn her spirits around. Keenly aware that every moment is precious, Gil knows We Have to Hurry, but can he get Margaret to take a walk on the beach and the first step toward happily ever after?

We Have to Hurry premiered on Broadway on Demand’s exclusive live stream event in May 2021, starring theatrical luminary Kathleen Chalfant and Oscar nominee Elliott Gould. A rotating cast of who’s who from stage and screen will pair up each month, with Alfred Molina’s co-star to be announced shortly. In keeping with the play’s touching message, all profits from performances of We Have to Hurry will be donated to The Actors Fund Home East and West. Owned and operated by The Actors Fund, the residences offer short-stay rehabilitation, assisted living, skilled nursing, and memory care services for individuals who have dedicated a major portion of their professional lives to the performing arts and entertainment.

Broadway’s Best Shows announces a musical extravaganza with dozens of Broadway stars performing the title songs from over 20 beloved musicals. Show of Titles will be available on June 8, 2021 for a limited time only. All proceeds will benefit The Actors Fund.

The evening will be a rousing and memorable celebration of title songs from more than two dozen Broadway musicals spanning nine decades, ranging from Lady Be Good to The Light in the Piazza. But is the original title song disappearing from the theatrical map? What used to be the norm has become a rarity. Tony nominees, for example, from the 60’s frequently had title songs. Contrast the 1965-1966-67-68 seasons when 75% of the nominated musicals had title songs, with the three most recent seasons when there was no original title song from a Tony-nominated Broadway musical.

The Executive Producer of “Show of Titles” is Jeffrey Richards.

A new Documentary About Ann Reinking “The Joy Is In The Work” to debut on YouTube. This is a tribute documentary film about Ann Reinking as a teacher, mentor, and inspiration during her time at Broadway Theatre Project between the years 1991 and 2004. Students share the stories of their experiences training with her and the knowledge she gave them in helping them grow as artists and as people. Actors, dancers, and singers from all walks of life featuring interviews from Patrick Wilson, Michael James Scott, Ashley Brown, Lorin Latarro, Matthew López, Connor Gallagher, Dylis Croman, and many more. ​The film is a collection of stories, archival videos, and photos of unseen rehearsals and performances during the summer program Ann Reinking co-founded and ran during the years of 1991 through 2004. ​The tribute documentary was curated and created by Chase Brock, Darren Lorenzo, and David Haverty (All previous students of Ann Reinking).