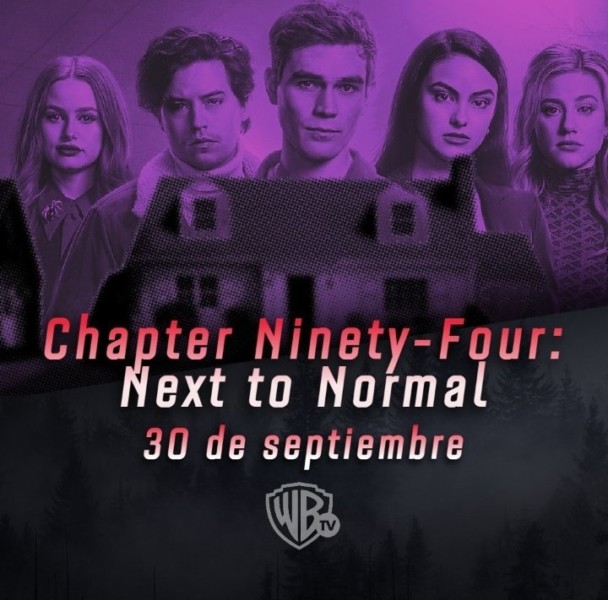 The CW hit Riverdale based on the Archie comics has released a new synopsis for “Chapter Ninety-Four: Next to Normal”, the eighteenth episode of Riverdale‘s fifth season. Alice Cooper (Madchen Amick) will create “an imaginary musical fantasy world” in which her family hasn’t undergone its various traumas.

The episode is also expected to see Tabitha (Erinn Westbrook) taking her relationship with Jughead Jones (Cole Sprouse) to the next level, Veronica Lodge (Camila Mendes) and Archie Andrews (K.J. Apa) will be making “a big decision about their future”, and Archie’s relationship with Betty Cooper (Lili Reinhart) deepens.

“We are overjoyed to be able to bring ‘The Ghost with The Most’ back to Broadway and are looking forward to seeing all our Beetlejuice fans.”

Casting has not been announced.

Performances will begin Wednesday, October 13, 2021, at Paper Mill Playhouse (22 Brookside Drive, Millburn, NJ), with an opening night on Sunday, October 17, 2021. The production will run through Sunday, November 7, 2021.  Paper Mill Playhouse is committed to a safe return and will require proof of vaccination for all artists, staff and audiences over 12 as well as face masks for staff and audiences in the theater. For the complete and latest protocols please visit https://papermill.org/reopening-guidelines/


Songs for a New World will feature choreography by Kenny Ingram (Emojiland, Paper Mill’s Dreamgirls), music supervision by Georgia Stitt (NBC’s “The Sound of Music Live!”) and music direction by Sinai Tabak (Broadway’s The Cher Show), who will also conduct.

Tickets start at $36 and may be purchased by calling 973.376.4343, at the Paper Mill Playhouse Box Office at 22 Brookside Drive in Millburn, or online at www.PaperMill.org. All major credit cards accepted. Groups of 10 or more may receive up to a 40% discount on tickets and should call 973.376.4343. Students may order $20 rush tickets over the phone or in person at the Paper Mill Playhouse Box Office on the day of the performance. Subscription packages are also available starting at just $114.

“We’re so excited to celebrate our fifth year of The TheaterMakers Summit with our biggest and best event yet,” said producer Ken Davenport.  “As our curtains rise once again, never has there been a more important time to talk about how to make better theater and how to make the theater better.”

Last year, due to the pandemic, for the first time The TheaterMakers Summit took place 100% online.  Streaming the event in 2020 allowed for the participation of attendees from all over the globe to interact with some of the world’s leading TheaterMakers. With the number of attendees having tripled from 2019,  last year’s event was the biggest and most exciting TheaterMakers Summit to date. So this year’s event will again be streamed online via Whova, Streamyard and Zoom.

Secure your general admission ticket now through September 30 for $397 (that is $100 off of the regular general admission price.) In addition to the virtual conference programming, registrants who purchase VIP admission for $697 attend VIP virtual networking events and exclusive add-on events like the Bonus Day on November 8. To purchase tickets and for further details, visit  TheaterMakersSummit.com.