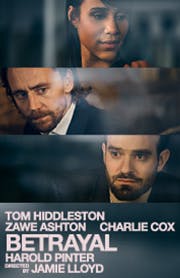 $40 rush tickets to Betrayal will be sold in person at the Bernard B. Jacobs Theatre box office on the day of the performances beginning when the box office opens (Monday – Saturday at 10:00 AM; Sunday at 12:00 PM). There will be a limit of two tickets per customer. Seat locations will be at the discretion of the box office and are based on availability.

The new musical based on the incredible real life story of an icon to end all icons, Diana, will open on Broadway in the spring of 2020.  Performances will begin on Monday, March 2, 2020 at the Longacre Theatre (220 West 48th St.), with an official Opening Night set for Tuesday, March 31, 2020.

Tony Award®-winning director Christopher Ashley (Come From Away) and the wrtiers behind the Tony Award-winning musical Memphis (Joe DiPietro and David Bryan) bring us face-to-face with one of the 20th century’s most compelling figures in this landmark musical event, featuring an epic and sweeping contemporary score, with music supervision and arrangements by Olivier Award®-winner Ian Eisendrath, choreography by Olivier Award-winner & Tony Award-nominee Kelly Devine, and Diana’s iconic style as reimagined by six-time Tony Award-winning costume designer William Ivey Long.

Diana had its world premiere at La Jolla Playhouse earlier this year and was an instant sold-out hit, extending its run into the spring.

Jeanna de Waal, acclaimed for her performance in the title role in the world premiere, will lead the cast on Broadway. She will be joined by Roe Hartrampf as “Prince Charles”,  Erin Davie as “Camilla Parker Bowles” and two-time Tony Award-winner Judy Kaye as “Queen Elizabeth”, all of whom will be reprising their roles for Broadway.

The cast features Ato Blankson-Wood, James Cusati-Moyer, Sullivan Jones, Chalia La Tour, Irene Sofia Lucio, Annie McNamara, and Paul Alexander Nolan, who are bringing their acclaimed Off-Broadway performances to the Golden Theatre (252 West 45th Street). They are joined by Joaquina Kalukango who will create the role of Kaneisha for the Broadway production. The cast is being understudied by Eboni Flowers, Thomas Keegan, Jakeem Dante Powell, and Elizabeth Stahlmann.

The Lightning Thief: The Percy Jackson Musical will come to Broadway this fall. The musical, features a book by Be More Chill book writer Joe Tracz and a score by Rob Rokicki, will play a strictly limited 16-week engagement at the Longacre Theatre beginning Sept. 20. Opening night is set for Oct. 16.

Based on Rick Riordan’s 2005 novel, which follows a teen demigod who is trying to prevent a war between the Greek gods, the musical arrives on Broadway after a 32-city North American tour and a 2017 off-Broadway run.

The Lightning Thief is directed by Stephen Brackett, who directed Be More Chill, with choreography by Patrick McCollum, set design by Lee Savage, costume design by Sydney Maresca, lighting design by David Lander and sound design by Ryan Rumery.