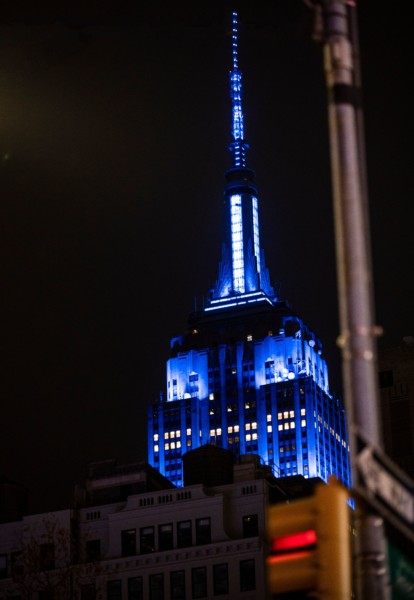 In his speech, Majority Leader Schumer stated, “This is the 32nd and last show to reopen on Broadway. We love Broadway, we love New York, we love the arts, and all three are back!

To celebrate the show’s highly-anticipated return to New York City and to commemorate Dear Evan Hansen’s five-year anniversary, the Empire State Building was lit in the show’s signature blue.

Mrs. Doubtfire, the new Broadway musical based on the hit film that officially opened December 5 at the Stephen Sondheim Theatre, has canceled its 2 PM and 7:30 PM December 12 performances due to overnight detection of positive COVID test results in the company.

The show’s next scheduled performance is Tuesday, December 14 at 7 PM. Ticket buyers will be contacted by Telecharge.com for exchanges and refunds.

Little Shop Of Horrors shut down weekend performances. They have one positive case of COVID-19 in the company and so, out of an abundance of caution as everyone’s health and well-being is of vital importance to us, we elected to cancel Saturday’s and Sunday’s performances.  We plan to resume performances on Tuesday night.

All tickets will be refunded at point of purchase. Thank you for your understanding.

The Broadway production of Freestyle Love Supreme, which officially opened its return engagement at the Booth Theatre October 19, has canceled its 5 PM and 9 PM December 11 performances due to breakthrough COVID-10 cases in the cast.

All tickets, according to the production’s social media postings, will be fully refunded at the point of purchase. The next scheduled performance is December 13 at 7 PM.

New Stephen Sondheim exhibit honors the Broadway Legend at New York Public Library. “No One Is Alone: The Letters of Stephen Sondheim,” will stay open through Jan. 22 on the third floor of the Library for the Performing Arts at Lincoln Center. The exhibition is made up of two sections. The first one showcases notes penned by Sondheim to his colleagues. The second highlights sketches and set models used on musicals that he wrote, including “Into the Woods,” “Passion,” and “Sunday in the Park With George.”

The Tony award-winning writer was also named a New York Public Library Library Lion in 2013, honored for his contributions to the cultural landscape.

Sondheim passed away November 26 at the age of 91.

Diana, The Musical will abdicate December 19th. Sadly this is not surprising.

RossDecember 29, 2021
Read More
Scroll for more
Tap
Broadway Rocks The Who
He Says: Mrs. Doubtfire A Musical That Defies Time