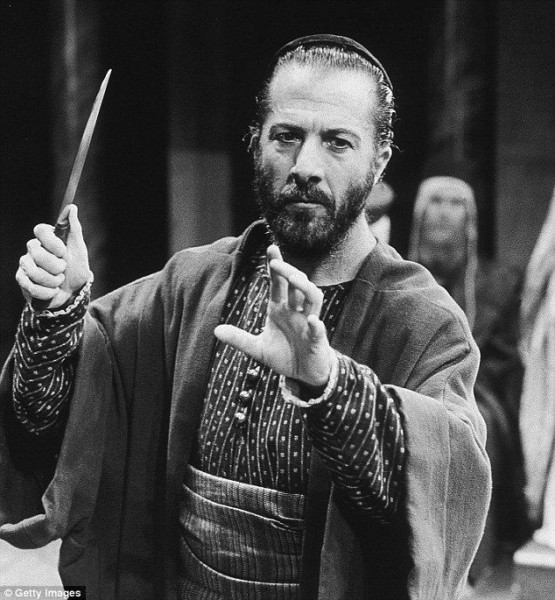 Dustin Hoffman as Shylock in Peter Hall’s 1989 production of “The Merchant of Venice.”

Look for Dustin Hoffman to take on iconic role of the Stage Manager in a Broadway revival of Thornton Wilder’s Pulitzer Prize-winning Our Town.  Scott Rudin and Bartlett are teaming up again after the hit To Kill a Mockingbird). Rubin is also bringing Hugh Jackman and Sutton Foster in with the revival of The Music Man.

Hoffman was last seen on the Main Stem as Shylock in the 1989 revival of The Merchant of Venice, for which he earned a Tony nomination. He opened the production months after winning an Oscar for his performance in Rain Man.

Hadestown, Broadway’s Tony Award®-winning Best New Musical, and past and present Major League Baseball players have come together and released two exclusive videos in celebration of the start of Spring Training and Broadway’s eventual and inevitable return.

The video of “Wait For Me” with new lyrics by Anaïs Mitchell featuring Steven Brault and Reeve Carney sharing the part of Orpheus and Josh Bell and Andre Dé Shields sharing the role of Hermes and the Hadestown Fates Jewelle Blackman, Yvette Gonzalez-Nacer, Kay Trinidad

The video of “Take Me Out to the Ballgame” featuring additional lyrics by Mitchell, orchestrations by Tony Award winner Todd Sickafoose and Hadestown music director Liam Robinson

The collaboration was inspired by Brault’s album A Pitch at Broadway (www.stevenbraultalbum.com) which was released this spring and features some of the greatest songs from the top Broadway musicals including Hadestown anthem “Wait for Me.” When both baseball and Broadway were shuttered due to the COVID-19 crisis, the teams got to work to celebrate these great American institutions and their devoted fans.

Ghostlight Records announced the release of two singles from Saturday Night Seder, “When You Believe,” with powerhouse vocalists Cynthia Erivo and Shoshana Bean, accompanied by esteemed composer Stephen Schwartz, as well as the original song, “Next Year,” sung by composer/musician Shaina Taub and actor/singer Skylar Astin. All profits from both re-recorded and remastered singles will benefit Jews For Racial & Economic Justice (JFREJ). To stream or download the singles, please visit ghostlightrecords.lnk.to/saturdaynightseder

The iconic ballad “When You Believe,” by Broadway legend Stephen Schwartz, speaks to the transformative power of hope and faith to carry people through troubled times.

“Next Year” was written by Hannah Friedman, Benj Pasek, Mark Sonnenblick, and Shaina Taub. The inspirational song, which closes out the Seder, features Taub on piano and vocals, joined by childhood friend and vocalist Skylar Astin.

With the closure of Broadway shows entertainment workers are unable to earn the work weeks needed to maintain health insurance coverage through their unions.

“One of our biggest immediate concerns in the midst of the pandemic is access to health insurance,” said Actors Fund Chairman Brian Stokes Mitchell. “

Suzanna BowlingAugust 9, 2022
Read More
Scroll for more
Tap
The Glorious Corner
What To Watch July 2nd To Take Away The Blues