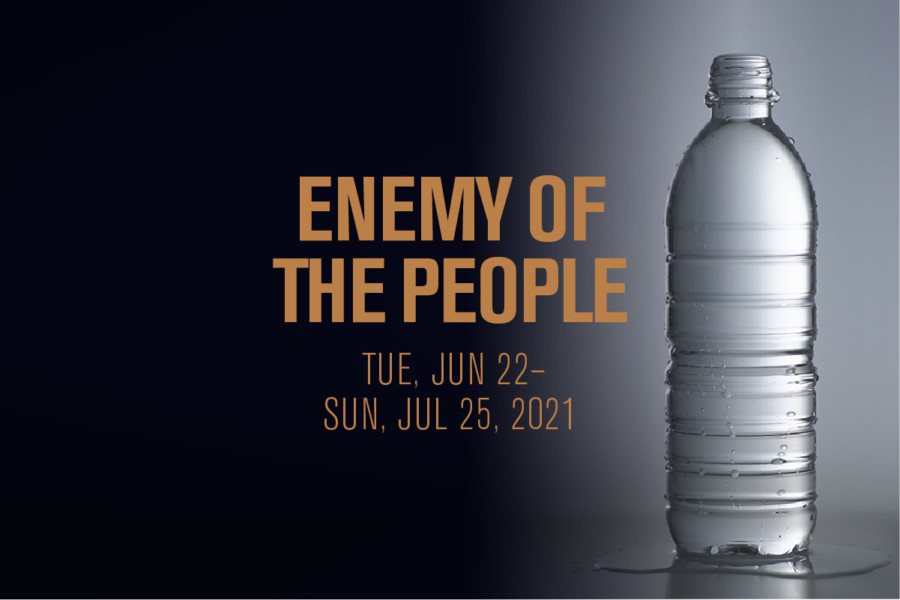 This summer, Park Avenue Armory presents the world premiere of Enemy of the People, an interactive adaption of Henrik Ibsen’s play, devised and directed by acclaimed playwright and director Robert Icke and starring Emmy Award–winning actor Ann Dowd. The fourth commissioned work in the Armory’s Social Distance Hall series, Enemy of the People is a timely reimagining of a classic play that delves into issues of collective responsibility, economic stability vs. public health, and how democracy functions in moral crises of magnitude—all of which have taken on heightened resonance during the pandemic year. The production runs in the Armory’s Drill Hall from June 22 through July 25, 2021.

Enemy of the People features Dowd as each of the central characters in the tale of a scientist who discovers that the local baths—a major source of revenue for the former manufacturing town—are contaminated, and the ensuing ethical crisis when she, the Mayor, and the townspeople must decide what to do with this knowledge. The audience, sitting in pods of friends or family, plays the role of the townspeople; at critical moments of the story, audience members will be invited to vote, with the majority vote determining the play’s direction at each juncture.

TodayTix Originals brought Broadway back to Tavern on the Green (Central Park West at 67th Street) with the opening night of Broadway at Tavern last night, a special series of live concerts from stars of the New York stage under the stars at New York’s most iconic eatery. Safely reuniting Broadway’s best artists with audiences, this exclusive TodayTix Originals concert series launched last night on Tuesday, May 25 with a one-night-only performance by original Hamilton cast member and star of Steven Spielberg’s West Side Story, Tony Award nominee Ariana DeBose.

Now streaming online, Changemakers, a collection of 20 original, two-minute plays and musicals inspired by community leaders, activists, and front-line workers who have fought for change over the course of the past year. Changemakersexplores our nation’s most critical current events, told through a series of comic and dramatic vignettes created specifically for this moment. This collaborative work, written by commissioned playwrights working alongside students from University of Kansas, premiered this spring before a limited, in-person audience, and is now streaming, for free, on YouTube. Changemakers was cowritten by members of the student cast in collaboration with 20 professional playwrights commissioned for this production. Commissioned playwrights include KU alumni, Tony-nominated librettist and lyricist Bill Russell (Side Show; Pageant; Elegies For Angels, Punks and Raging Queens) and Award winning and internationally produced playwright James Still (The Heavens Are Hung in Black, The Secret History of the Future); and Broadway actor and award-winning playwright Rodney Hicks (featured in Broadway’s Come From Away, Rent, The Scottsboro Boys). This production is directed by University of Kansas’ Markus Potter (off-Broadway’s Stalking the Bogeyman, Church & State) and Darci Jens Fulcher (Goat in the Road Productions, New Orleans), with musical direction and live accompaniment by Ryan McCall (The Ballad of Lefty and Crabbe, Chicago Musical Theater Festival).

Art Lab and ShowTown Productions are pleased to announce that Diana DeGarmo and Ace Young – former “American Idol” contestants who are married in real life – will co-star in a new virtual production of the 2013 Broadway musical comedy, First Date. The production, directed by Meg Fofonoff, will stream for five performances from July 23-25 on the ticketing platform, Stellar.

Founding Artistic Director Akia Squitieri announced today that Rising Sun Performance Company will be presenting a new Hybrid workshop production of “City Of Dark” which will be Live Streamed from the Stage of the theatre at the 14th Street Y. Rising Sun Performance Company’s first live-streamed hybrid workshop production takes us to the apocalyptic end of the world in Michael Hagin’s original production City of Dark. Desperation turns to violence as walls close in on six outcasts who fight to survive the end of the world. How does humanity manifest when resources run short when the world is about to explode when the outside threatens our lives? This timely play explores the depth of human nature and how desperation and survival transform us.

This workshop production marks Rising Sun Performance Company’s first in-person return to working in person since March of 2020. Through a partnership with the Theater at the 14th St Y, the company created a two-week development laboratory, and is using this opportunity to explore this new play in person and will be streaming the performances from onstage at the theatre. These performances will not have a live-in-house audience. Through City of Dark, Rising Sun continues to their exploration of this ever-changing and growing new medium, and expands on how they foster theatrical creativity.

Dixon Place presents Bill’s 44th by Andy Manjuck & Dorothy James as part of its Spring 2021 Production Season of puppetry commissions, performed live from June 2-5 at 7:30pm EDT with video on demand (VOD) streaming available from June 8 through June 15, 2021. In-person performances will take place at 161A Chrystie Street, New York, NY. Tickets are $10-$35 and can be purchased online at dixonplace.org/productions-2021/.
Bill’s 44th by Andy Manjuck & Dorothy James

The streamers are hung, the punch has been spiked, and the cake is just begging to be eaten! Now all Bill has to do is wait for his guests to arrive. But waiting is hard. Bill’s 44th is an original comedic show that brings two puppeteers together to create one (very worried) protagonist. Many styles of puppetry, raucous balloons, and a cheeky piece of crudité all collide to examine the pitfalls of impatience and the wonder of loneliness. Approx. run time: 55 minutes. Rated PG.

Suzanna BowlingMay 9, 2022
Read More
Scroll for more
Tap
What to Watch in The New Year: May 27
The Tony’s Are Finally Being Awarded as They Piggyback Onto Broadway’s Back Special