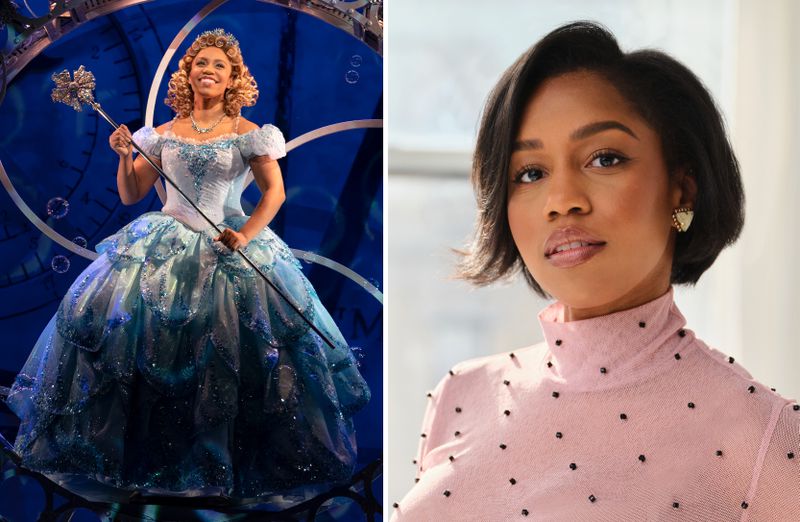 Ms. Johnson will assume the role of Glinda opposite Lindsay Pearce as Elphaba, Alexandra Billings as Madame Morrible, Michael McCormick as The Wizard, Sam Gravitte as Fiyero, Jordan Barrow as Boq, Mili Diaz as Nessarose, and Michael X. Martin as Doctor Dillamond.

Chosen by the Poitier family, Charles Randolph-Wright (author of Blue, director of Roundabout Theatre Company’s critically acclaimed revival of Alice Childress’ Trouble in Mind, and the upcoming American Prophet: Frederick Douglass In His Own Words) has penned  Sidney, based on Poitier’s best-selling autobiography The Measure of a Man.

Sidney dramatizes Mr. Poitier’s life, from his upbringing on Cat Island in the Bahamas to his rise to become America’s most revered actor and activist. With his unique career, Sidney Poitier helped change many racial attitudes that had persisted in this country for centuries. He built the bridges and opened the doors for countless artists in succeeding generations. He is an actor who stood for hope, for excellence, and who has given happiness to millions of people around the world. Paying tribute to Sidney Poitier in 1967, Dr. Martin Luther King, Jr. said, “He is a man of great depth, a man of great social concern, a man who is dedicated to human rights and freedom.”  The play explores the nature of sacrifice and commitment, pride and humility and the price for artistic integrity. Poitier has inspired many artists in multiple fields including encouraging Alice Childress to begin writing when they were both members at American Negro Theatre.

Playwright Charles Randolph-Wright says, “The first time I met Sidney Poitier was decades ago when he saw a show I co-wrote and directed in Los Angeles. We went to dinner and I literally could not speak. He said to me, ‘If in any way I have inspired you, you have more than paid me back with what I saw this evening.’ I have held onto those words my entire career.  And now to place his astonishing life on stage is the ultimate challenge and the ultimate joy. To have the trust of Mr. Poitier and his family is one of the greatest gifts I have been given – what an honor to get to dramatize the true measure of this monumental man. I look forward to the world discovering the astounding person that is behind one of our most prodigious heroes, a man who continues to inspire.”

Director Ruben Santiago-Hudson says,  “Sir Sidney Poitier is clearly one of the greatest actors in the history of cinema. His integrity and standard of excellence set the bar for generations to come. It is an honor to be a part of celebrating the incomparable Sidney Poitier’s monumental career in this play but also the man and his extraordinary life.”

Published in 2000, The Measure of a Man: A Spiritual Autobiography spent several weeks on The New York Times’ list of best sellers, and the audio edition, narrated by Mr. Poitier, won a Grammy Award for best spoken word album. In 2007, Oprah Winfrey relaunched her Book Club with the memoir.

Casting, creative team and production timeline will be announced at a later date.

Empire Records, the last of the independent small-town record stores, employs a tight-knit group of music-savvy youths. Hearing that the shop may be sold to a big chain, slacker employee Lucas places a big bet with a chunk of the store’s money, hoping to get a big return and save the store. When plans go awry, Empire Records falls into serious trouble, and the teens must find a way to fend off the encroaching Music Town overlords.

Released in 1995 by New Regency, the film Empire Records starred Liv Tyler, Renée Zellweger, Anthony LaPaglia, Robin Tunney, Rory Cochrane, Ethan Embry and Johnny Whitworth, directed by Allan Moyle. The film quickly cemented its status as a cult classic, and 25 years later, it is still hailed by BuzzFeed as “the film of a generation” and “the teen-movie equivalent of the mid-‘90s alt-rock zeitgeist… a film that managed, however oddly, to capture the ineffable feeling of being a quasi-alienated teenager in a very specific time.”

New York State ordered theaters to close almost two years ago, forcing a number of theaters and theater companies to close forever. The State set us out into the danger of COVID without enough lifeboats.Theaters in New York were already in danger before COVID hit. We had lost seventy-five theaters in the ten years before the pandemic, not due to lack of audience, but due to hyperinflation. While proclaiming our city to be a world cultural capital, the government allowed speculation on property to kill off theater after theater. We are being forced into default on our mortgage, by state action, without mitigation. In every way, it is the equivalent of an eminent domain seizure without compensation. The government is allowing disaster profiteers to make over two million dollars profit in a year.The company which bought our debt is not the only disaster profiteers we face today. Others seeking to profit on this world-wide disaster are attempting to profit on our hardship through frivolous lawsuits and outright fraud on the court. Imagine if the Titanic sank in warm, shark infested waters, and that would perfect the image of what New York State has been doing to us. There is not a large class of businesses harmed to the degree we have been. We had a hard money loan, which had a provision which allowed for a UCC sale in the face of default rather than a foreclosure process. This loan was not protected by the State in the face of a direct order from the government to stop doing business to halt the spread of the illness.

What can you do? Write to Governor Hochul, and ask that New York State to give a low interest loan to mitigate the damage the Cuomo administration has done by not including properties in our class under protections against UCC sales.Please, write, phone and email. You don’t have to be a New Yorker to tell the governor how important Theatre 80 is to New York. If you have visited from overseas… also contact Governor Hochul.By Mail: Please send us copies, or inform us about phone calls. Sample letter to follow, feel free to write your own.The Honorable Kathy Hochul Governor of New York State NYS State Capitol BuildingAlbany, NY 12224By phone:1-518-474-8390 | Office hours: 9:00am to 5:00pmBy email: (Contact form) https://www.governor.ny.gov/content/governor-contact-form

I am writing to ask that you involve your office to stop a grave injustice. Theatre 80 Saint Marks has been a jewel in the crown of New York’s cultural heritage since 1965. It is owned by Lorcan and Genie Otway, a senior citizen couple who have selflessly served the the community for decades, running the theater, museum and tavern at 80 Saint Marks Place, making it a world-famous site for people to experience the New York which people are fast losing to hyperinflation and now the aftermath of COVID. An oversight by the Cuomo administration made it possible for a predatory company to take advantage of the COVID crisis to increase the debt of this historic building by millions of dollars in a year and now is attempting to sell the property leaving the owners broke and homeless as a reward for their dedicated service to New York’s history and place as an international cultural center.When the state ordered theaters and museums to close, Lorcan and Genie supported the plan fully, knowing that it would make things difficult for some time to come. What they could not have imagined was that for nearly two years their theater would be shut, and that the state would allow a company to purchase their debt after the state forced them into default on their mortgage. A major part of the separation of the United States from Britain concerned protection of property rights. These rights were insured in our founding documents. What is happening is the equivalent of an eminent domain case without compensation for the State’s taking of property. We ask that the State of New York address this unconstitutional taking in the face of international disaster, by extending to the Otway’s a low interest loan to save this vital part of New York’s tourist and theater experience, and as an acknowledgement of Lorcan’s five decades of service to New York’s cultural reputation.

Suzanna BowlingJanuary 22, 2023
Read More
Scroll for more
Tap
A Charlie Brown Christmas: Live on Stage
Countdown to Christmas Day Our Holiday Gift Guide: Give The Gift of Broadway With A Little Giving On The Side