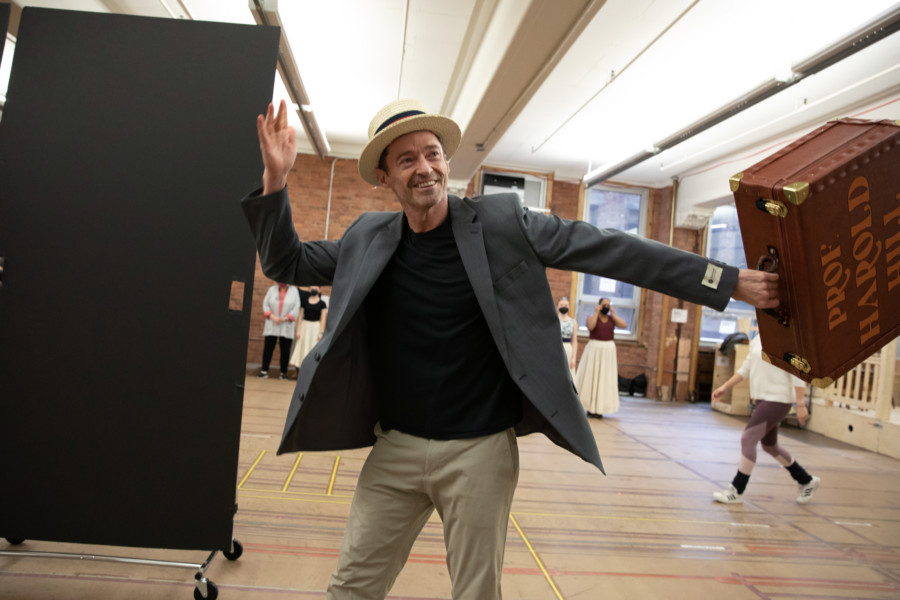 The production has been playing to sold out audiences and critical acclaim since beginning performances recently extended due to popular demand with its final performance set for this Sunday, November 21st at 7:00pm.

​​Originally announced and slated for fall 2020, Black No More arrives in January 2022 in this world premiere production from The New Group.

Park Avenue Armory announced its programming for the coming year, including new commissions, and world and North American premieres.

“As we reemerge from two years of isolation, political upheaval, and social reckoning, we turn to artists to recontextualize the past and look to the future,” said Rebecca Robertson, Park Avenue Armory’s Founding President and Executive Producer. “

The Armory’s 2022 season begins in February with Assembly, a multifaceted commission by interdisciplinary artist Rashaad Newsome. Artificial intelligence, sculpture, CGI, assemblage, and holography. As visitors enter, they are confronted with video-mapped walls pulsing with computer-generated imagery surrounding a 40-foot-tall hologram sculpture and a 350-seat theater. At the center of all of this is Being, the second generation of Newsome’s AI progeny whose voice acts as the exhibition’s soundscape. When not reading their poetry, Being invites visitors to take workshops that combine lecture, critical pedagogy, dance, storytelling, and mindfulness meditation, bringing new possibilities for reflection and an enhanced academic experience for all people. For seven evenings, the theater will come alive with the premiere of Newsome’s new performance featuring live poetry, music, vocalists, and dancers from across the globe-–presenting contemporary movements that synthesize vogue fem with the traditional dance from their territories.

The season continues in March with the North American premiere of Upload, agroundbreaking new opera by eminent Dutch composer, film and stage director, and librettist Michel van der Aa, who returns to the Armory after following the success of his technologically ambitious Blank Out in 2017. With Upload, van der Aa ventures again to the frontiers of technological innovation with an engrossing tale conveyed by live performance, motion capture, and film. Following a critically acclaimed run at the Dutch National Opera in October 2021, Upload tells the story of a daughter (soprano Julia Bullock) and her father (baritone Roderick Williams) who, when confronted by his inevitable death, has his thoughts and memories “uploaded,” in order to achieve a “virtual resurrection.” The deeply emotional work poses age-old questions-about fate, identity, and the cost of immortality-that take on new significance against a backdrop of present-day and near-future technologies.

From May and June through mid-August, British director and playwright Robert Icke-–whose Armory-commissioned work Enemy of the People, reconceived the space. An award-winning modern interpretations of William Shakespeare’s Hamlet and his own adaptation of Aeschylus’s Oresteia, performed in repertory. Young talent Alex Lawther(The Imitation Game, The End of the F***ing World) stars as the brooding protagonist of Hamlet and Lia Williams returns to Oresteia in her Olivier-nominated role as Klytemnestra. Aeschylus’s epic ancient Greek trilogy that follows a succession of brutal family murders and asks whether justice can be achieved through revenge. Icke has condensed and modernized the Greek masterpiece into a single three-hour performance that presents the play as a bold family drama.

Fall 2022 at the Armory begins in September with Rothko Chapel, a new musical commission by MacArthur “Genius,” multi-instrument virtuoso, and genre-defying composer Tyshawn Sorey based on the iconic work written by Morton Feldman as a tribute to Mark Rothko and Houston’s Rothko Chapel on the occasion of its dedication in 1971. Fifty years later, Sorey’s work pays homage to both Feldman-–whom Sorey cites as a major influence on his compositional style-–and the Chapel, resonating with the minimalism of its 14 black Rothko paintings and its symbolism as a non-denominational spiritual space dedicated to the pursuit of human rights. Sorey, who performed in an Artists Studio program in the Armory’s Veterans Room in 2016, now escalates his practice to the magnitude of the Drill Hall, enlisting director Peter Sellars to realize a staged work of the composition designed specifically for the space. Sellars also directed the celebrated Armory productions of St. Matthew Passion in 2014, FLEXN in 2015, and FLEXN Evolution in 2017. Joining Sorey and Sellars to create a meditative space within the Drill Hall is visual artist Julie Mehretu. Mehretu’s abstract and experiential practice will manifest in a series of large-scale canvases that will encompass the audience and performers in a concentrated memorial environment.

Returning to the Armory after the 2016 presentation of his film installation Manifesto, which captivated audiences worldwide, Julian Rosefeldt caps off the 2022 season with Euphoria, a new, Armory-commissioned multi-channel film and musical installation exploring the concepts of capital, money, greed, and what Rosefeldt describes as “the destructive potential of unlimited economic growth.” Euphoria is scored with original music composed by Samy Moussa and with additional music by Cassie Kinoshi, performed by 140 singers from the Brooklyn Youth Chorus and five acclaimed jazz drummers: Terri Lyne Carrington, Steve Gadd, Yissy García, Eric Harland, and Antonio Sanchez.

Throughout the year, the Armory will also present a roster of intimate performances, salons, artist talks, and educational programs in its historic period rooms. The Armory’s longstanding Recital Series, presented in the Board of Officers Room, in 2022 features classical and contemporary works performed by chamber ensembles Alarm Will Soundand Ensemble Correspondances, baritone Justin Austin, tenor Michael Spyres, mezzo-soprano Emily D’Angelo, and soprano Ying Fang. The Veterans Room hosts the Artists Studio, a series of eclectic, cross-disciplinary performances curated by jazz pianist, composer, and MacArthur fellow Jason Moran. In 2022, Moran himself will take the stage to perform two nights of solo piano-his first solo performances at the Armory since the series’ inception in 2016. Other Artists Studio programs for the year will feature pioneering performance and video artist Joan Jonas, conceptual artist Rodney McMillian, and a collaboration between multimedia artist Camille Norment and pianist, composer, and electronic musician Craig Taborn.

Additionally, under the curation of newly appointed Curator of Public ProgrammingTavia Nyong’o, the Armory will present a series of talks, salons, symposia, performances, and other activations that bring artists, activists, cultural leaders, scholars, and audiences into dialogue about contemporary issues through an artistic lens. Formerly known as Interrogations of Form, the new Making Space series launches in 2022 with a slate of programming that addresses the fault lines in our racial and social order laid bare by the events of the past two years, tackling topics as varied as climate change, rebellion against technological algorithms, queerness in hip hop, and the legacies of Juneteenth.