Theatre News: for colored girls who have considered suicide/ when the rainbow is enuf, Company, MJ, Potus, Solo Flights, SuperHero and The Honorable Herbert Peabody Theatre News: for colored girls who have considered suicide/ when the rainbow is enuf, Company, MJ, Potus, Solo Flights, SuperHero and The Honorable Herbert Peabody

The fabulous Jennifer Simard wowed us in Company, now she is playing Joanne as Patti LuPone covers from COVID. On twitter the hysterical Simard tweeted(@SimardJennifer): “In a storage unit in the Hudson Valley, I have a cassette tape of me singing “I Dreamed A Dream” at 18 years old trying desperately to sound as good as Patti LuPone and I’m still trying. I will be trying again this week March 1- March 6. #getwellpatti”

We welcome back Myles Frost, who plays Michael Jackson in MJ. He suffered a foot injury and has been out since Feb. 4th. He is set to return this week. Aramie Payton and understudy Darius Wright have been performing the role.

Tony Award-winning production company Seaview (Slave Play), Academy Award-nominated producer Lynette Howell Taylor’s 51 Entertainment (A Star is Born), Olivier Award-winning Glass Half Full Productions (Betrayal), and Tony Award-winning entertainment company Level Forward (What the Constitution Means to Me), are thrilled to announce the world premiere of Selina Fillinger’s new play POTUS: Or, Behind Every Great Dumbass are Seven Women Trying to Keep Him Alive. A 2019 selection for The Kilroys’ List, this modern farce will stake its flag on Broadway this spring at the iconic Shubert Theatre (225 West 44th Street). POTUS marks the Broadway debut of 28-year-old playwright Selina Fillinger (Something Clean), in a production directed by five-time Tony Award winner Susan Stroman (The Producers, The Scottsboro Boys). 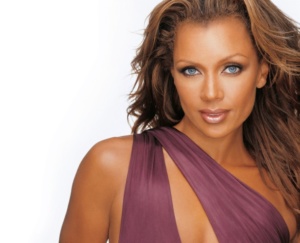 Broadway’s uproarious new comedy about the women in charge of the man in charge of the free world, POTUS begins previews at the Shubert Theatre on Thursday, April 14, 2022, with an official Opening Night of Monday, May 9, 2022, for a limited engagement through Sunday, August 14, 2022. 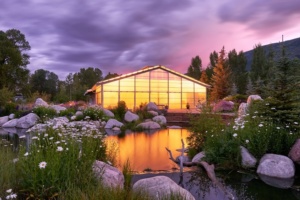 Theatre Aspen is now accepting submissions for the organization’s third annual one-person show festival, Solo Flights.Solo Flights is an annual weeklong developmental festival of one-person shows presented in the beginning stages of their making. Launched in 2019 the festival has brought a variety of diverse works and celebrated actors and directors to Theatre Aspen. Artists have included Beau Bridges, Kaye Winks, Sarah Stiles, Christine Quintana, Emma Ramos, Richard Greenberg, Lameece Issaq, Kate Baldwin, Taylor Trensch and more! Submissions can be made by visiting https://theatreaspen.submittable.com/submit/216608/theatre-aspen-2022-solo-flights-festival-submissions. The deadline is April 1 and the festival will be taking place September 10-15 at Theatre Aspen’s Hurst Theatre. Additional details for Theatre Aspen’s 2022 Season, including dates, productions, and casting, will be announced shortly. For more information, please visit TheatreAspen.org. 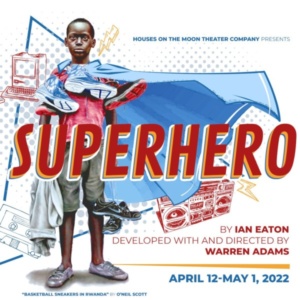 Houses on the Moon Theater Company (Emily Joy Weiner, Co-Founder & Artistic Director; Kevin Connor, Managing Director), today announced the cast and creative team for the World Premiere of SuperHero, a new play written by Ian Eaton, developed with and directed by Warren Adams. Performances begin Tuesday, April 12, 2022 for a limited engagement through May 1, 2022 at The Sheen Center for Thought & Culture – Blackbox Theater (18 Bleecker Street in the East Village). Opening Night is Thursday, April 14, 2022, at 7:00PM.

SuperHero is an original play about a boy who fantasizes about having superpowers. This coming-of-age story is inspired by playwright Ian Eaton’s experiences of navigating strict West Indian parents, girls, and Catholic school amidst the backdrop of 1980’s Manhattanville Projects in Harlem. After a tragic event, Ian’s fantasies of being a “super” man are shattered when a neighborhood bully forces him to confront the kind of man he wants to become. 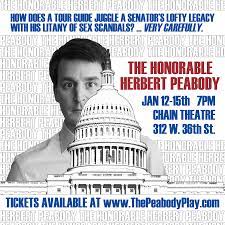 Off-Broadway premiere! How does a hapless tour guide juggle a Senator’s lofty legacy with his litany of sex scandals? That’s the question at the heart of the seriously funny one-man show, The Honorable Herbert Peabody, written and performed by Kirk McGee (Chasing Taste, “The Path,” “Sesame Street”), and developed with and directed by Corey Atkins (Lincoln Center Theatre, Cleveland Play House, The Acting Company). Performances for the limited engagement of The Honorable Herbert Peabody begin TOMORROW, Wednesday, March 2, 2022 at 7:00PM continuing through Saturday evening, March 5, 2022 at Chain Theatre(312 West 36th Street, 4th Floor).

The Honorable Herbert Peabody was inspired by the collision of two important facets of Kirk McGee’s life: the #MeToo scandals of his comedy heroes Bill Cosby and Al Franken, and having grown up in a family with a (thankfully untarnished) political legacy. (His grandfather was a highly-regarded U.S. Senator from Wyoming from 1959-1977.) The idea came to a head when McGee realized that Donald Trump would one day have a Presidential Library. He wondered, would it feature the infamous “Access Hollywood” tape? Showcase the actual magazine Stormy Daniels used on the presidential posterior? As Joe the Tour Guide says, “Kinda boggles the mind, doesn’t it?”