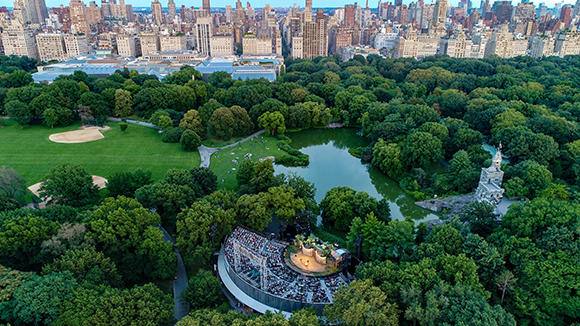 This year, we must stand together in keeping our city and each other safe. This means our summer season of Free Shakespeare in the Park will not be possible, and we must cancel our planned productions of RICHARD II and Public Works’ AS YOU LIKE IT.  We must also suspend our remaining season of programs and events at our flagship home at Astor Place through August 31.

This is a time of immense shared loss, throughout our city and throughout the world. The Public will bear financial losses, reductions in our staffing, and most heartbreakingly, the loss of our ability to gather and share stories together.

In observation of Yom Ha-Shoah and to foster an ongoing sense of community during these isolating times, Temple Emanuel Streicker Center will host a special live-stream panel discussion on Monday, April 20 at 6:30pm (EST). The discussion will be introduced by Temple Emanuel Rabbi Joshua M. Davidson and National Jewish Theater Foundation President Arnold Mittelman. Taking questions from the worldwide virtual audience, the panel will include stars Ed Asner and Tovah Feldshuh, playwright Jeff Cohen, historian and Project Director for the United States Holocaust Memorial Museum Michael Berenbaum and the Obama Administration’s Special Envoy for Combatting Anti-Semitism Ira Forman. Moderating the panel discussion will be Richard Salomon, Vice President of the Illinois Holocaust Museum and Education Center. The panel discussion is free but registration is required via the Temple Emanuel Streicker website.

The 85-minute play The Soap Myth was taped on April 22, 2019 at the Center for Jewish History/YIVO Institute for Jewish Research in New York City. A program of PBS/WNET and the ALL ARTS channel’s “House Seats” series, it can be viewed free-of-charge on any of the ALL ARTS streaming platforms.
Alongside Ed Asner as Holocaust survivor Milton Saltzman, Tovah Feldshuh plays the dual roles of Holocaust scholar Esther Feinman and Holocaust denier Brenda Goodsen. Also in the cast are Liba Vaynberg as journalist Annie Blumberg and Ned Eisenberg portraying five roles, including Holocaust scholar Daniel Silver. The play reading was directed by Pamela Berlin.

The performance of The Soap Myth is a part of the National Jewish Theater Foundation/Holocaust Theatre International Initiative program “Remembrance Readings” to honor and commemorate the Holocaust through works of theater. The Illinois Holocaust Museum and Education Center is the educational partner of The Soap Myth.

From the nearly 300 eligible theater artists who have applied, The Bret Adams and Paul Reisch Foundation COVID-19 response grant recipients were selected randomly by electronic  lottery. Eligible playwrights, composers, lyricists, and librettists were those who had a professional production canceled should submit their name and proof of a professional show’s closure. (“Professional,” in this case, is defined as LORT, Off Broadway, or Broadway).  With a submission deadline of April 14, The Foundation aimed to make funds available to artists as quickly as possible, as many artists are already in dire need. “The Bret Adams & Paul Reisch Foundation’s mission as a charitable foundation is to give money to writers with ‘big ideas.’ This year, our ‘big idea’ is our declaration that we must help those who have had productions cancelled” says Bruce Ostler, V.P. and Board Member of The Bret Adams and Paul Reisch Foundation. “In no uncertain terms, the business of theatre today has ground to a shocking halt due to the pandemic. Playwrights are not salaried workers and therefore are NOT eligible for unemployment for a cancelled production. We want to get money to people who need it NOW.   At the very moment when  theatres began announcing they were canceling productions and shows started closing, a small group of concerned theatre samaritans ran towards the emerging doom to put forward the simple but ‘big’ idea that together we can and should help those in need.  Today at 7PM, when all New Yorkers shout and cheer out our windows for first responders, I know I will be thinking of these theatre first responders: Kate Bussert, Sheilah Rae, Terry Bernstein, Ben Pesner, Emily Morse, Joel Ruark, Mark Orsini, Bonnie Davis, Beth Blickers, Melissa Crespo and Sarah Ruhl.  I am proud and honored to be associated with these nimble humanitarians.”

We are pleased to be joined by:

Our featured speaker will be Jumaane D. Williams, NYC Public Advocate, who will discuss his connection to the performing arts and his current work and initiatives to help impacted individuals and small businesses.

The meeting will begin promptly at 12:30PM. If you are new to ZOOM, please visit www.zoom.us or download the free app and RSVP to Alexandra Byrne, ab@nicholaslence.com, who will then share the Zoom meeting information with you.

Suzanna BowlingSeptember 23, 2022
Read More
Scroll for more
Tap
Flowers for Mrs. Harris Streams in from Dior’s Paris by way of Chichester Festival Theatre
What To Watch April 18th To Take Away The Blues