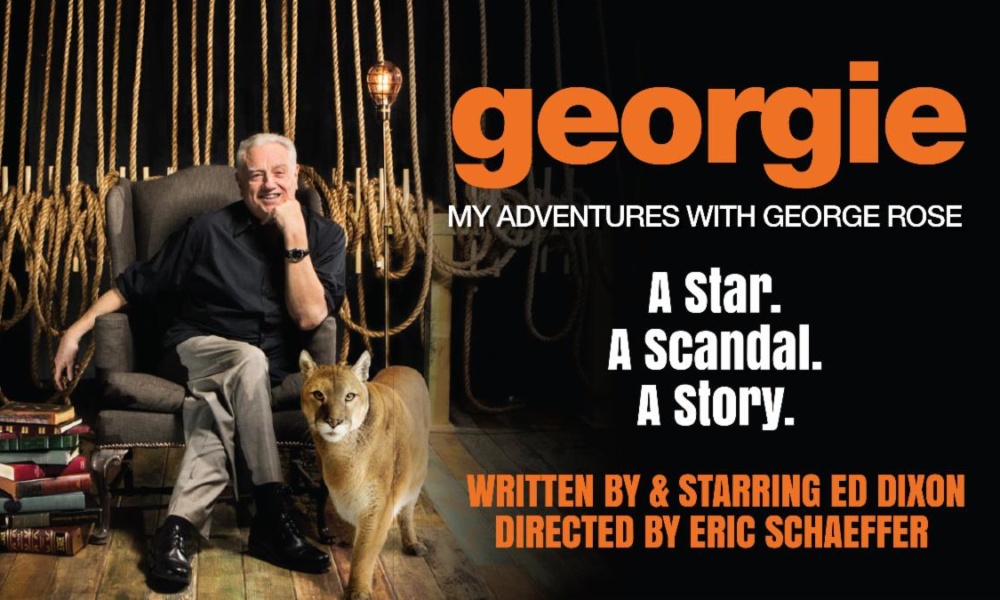 Streaming on Demand May 24th – July 18 Georgie written and starring Ed Dixon from The York Theatre. This is a tale of how a chance encounter began an unlikely twenty-year friendship that flourished until the unimaginable changed everything. It is an amazing journey for all who love theater.

Georgie is the remarkable, giddy, and moving story of a young actor named Ed Dixon, who finds himself on tour with the two-time Tony Award winning character actor George Rose, the star of The Mystery Of Edwin Drood, My Fair Lady, The Pirates of Penzance and 17 other Broadway plays and musicals. Georgie introduces us to the greatest stars of the London and Broadway stage with laughs and surprises, tantalizing anecdotes, and brilliant flashes of song and dance. Georgie is as hilarious and captivating as it is poignant and powerful.

The new six-episode, jaw-dropping series follows New York City neighbors Rachel (Audra McDonald, The Good Fight) and Lily (Taylor Schilling, Orange is the New Black) as they cautiously combat a strain of a deadly virus while balancing the nuanced struggles of everyday life (like keeping marriage vows, making deadlines, and remembering to “unmute”).

The series was specifically cast to feature an array of Broadway stars out-of-work during the COVID-19 pandemic. Steven Pasquale and Will Swenson co-star alongside talent like Phillipa Soo, Michael Urie, Rob McClure, Joanna Gleason and Leslie Uggams. Co-creators Robert and Michelle King(The Good Fight, Evil) spoke to their reasoning behind this intentional decision: “We wanted to get jobs for the Broadway people we knew would be out of work for a long time. We wanted the best actors we could find, and the best actors we could find really needed work at this moment.”

The Public is thrilled for the return of Obie Award-winning artists 600 Highwaymen’s A Thousand Ways (PART ONE): A Phone Call, after a sold-out run during the Under the Radar Festival earlier this year. Part One begins tonight. Tickets are available now.

Tickets for Part Two: An Encounter will be available on Friday, May 28, 2021. Learn more about the second installment of A Thousand Ways and the return to in-person, live theater at 425 Lafayette.

This Memorial Day weekend, you are cordially invited to attend the Broadway On Demand presentation of Richard Oberacker and Robert Taylor’s electrifying Broadway musical Bandstand, Friday, May 28 – Monday, May 31.

In Bandstand, it’s 1945 and the boys are back. With American soldiers returning home, singer-songwriter Private First-Class Donny Novitski dreams of rebuilding his life, forgetting his demons, and hopes for everything to be just like it was before. When NBC announces a national competition, a ‘Tribute To The Troops,’ Donny joins forces with a motley group of musicians, and together they form a band unlike any the nation has ever seen: a band of veterans. On their journey, they fight to have their voices heard, struggle to trust each other, and together must make a sacrifice that could end it all.

Bandstand: The Broadway Musical on Screen was initially released in movie theaters nationwide in June 2018 by Fathom Events, in special partnership with the military non-profit TAPS, which cares for the families of America’s fallen heroes. Due to the success of the initial film release, an encore presentation took place in November 2018. The Broadway musical was also the first live entertainment production ever to be “6 Certified” by Got Your 6, for its accurate portrayal of the veteran experience. Bandstand was streamed on Playbill.com on April 10, 2020.

CO/LAB Theater Group, a non-profit organization dedicated to offering individuals with developmental disabilities a creative and social outlet through theater arts, celebrates their 10th Anniversary with a virtual festival with both pre-recorded and live events from June 17-June 20 and a live virtual benefit on their 10th Anniversary, June 21. The benefit will be hosted by award-winning journalist Liz Plank and The Book of Mormon actor and activist Dimitri Moise.

CO/LAB’s June Festival, Beyond the Horizon, will feature four consecutive evenings of original content created by their neurodiverse ensemble of Actors, Teaching Artists, and Supporting Artists. Included in the festival is an SNL-inspired evening of comedy; a live play reading of work written by their Playwriting class; and the premiere of PLOOTO: A Space Oddity, a new musical inspired by the 30th anniversary of the Americans with Disabilities Act with guest appearance by disability rights activist Judy Heumann.

“This festival is the first of its kind for CO/LAB. Creating in this virtual space provided an opportunity for us to present such varied work and showcase all of our actors from the semester over one weekend. Our ensembles blew us away with their innovation and dedication and we can’t wait to share their work!” said Abby Schreer, CO/LAB’s Director of Programs and Operations.

The festival weekend culminates in CO/LAB’s 10th Birthday Party, a live virtual benefit celebrating a decade of collaboration, community, and creativity. Attendees can explore different virtual rooms, engage with members of the CO/LAB community, and enter to win exciting raffle prizes. This year’s benefit honorees are co-founders and Teaching Artists Laura Borgwardt and Arielle Lever, and NYC arts service organization ART/NY, which has been a longtime partner of CO/LAB’s work.

Woodie King’s New Federal Theatre (NFT) has set plays by Mustapha Matura, S. Shephard-Massat and Larry Muhammad for the June, 2021 edition of its Annual Ntozake Shange Readings Series, which will be held three Tuesdays in June–June 8, 15 and 22– all in live streamed readings on Zoom. This readings series is used to develop African-American writers and to select plays that New Federal Theatre may present as full productions.

The series is named for the late playwright Ntozake Shange, who died in October 2018. Her relationship with Woodie King, Jr.’s New Federal Theatre (NFT) goes back to the 1976-76 season, when NFT presented the first production of “For Colored Girls Who Have Considered Suicide When the Rainbow is Enough.” NFT subsequently moved the play in a co-production with Joseph Papp to the Public Theater for eight weeks, then to Broadway’s Booth Theatre (in a co-production). Woodie King then produced “Colored Girls…” in London, directed by Avery Brooks and in Australia, directed by Oz Scott.

All readings are free but donations will be gratefully accepted. To sign up, visit: www.newfederaltheatre.com.