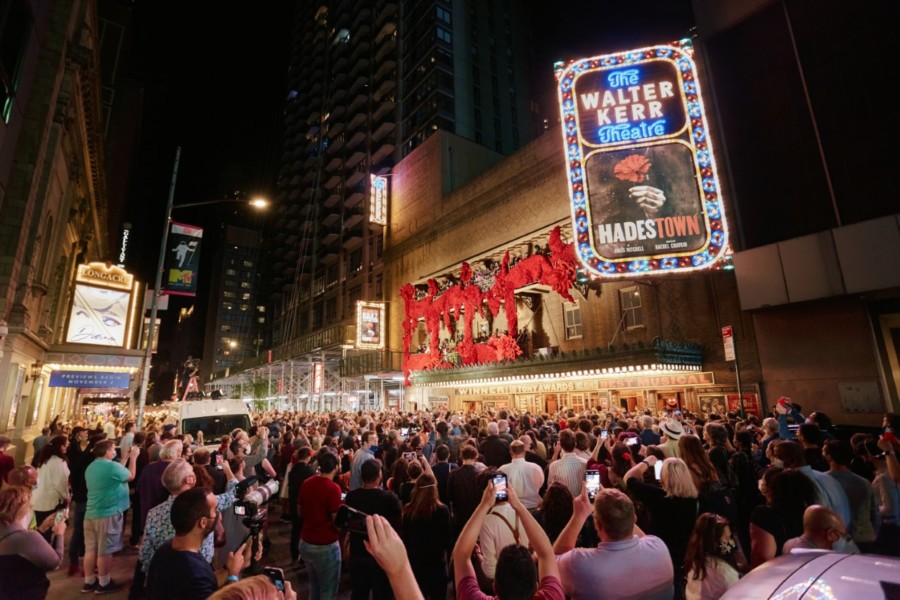 Hadestown, the Tony Award®-winning Best New Musical, made history when it welcomed back its first audience to Broadway in more than 18 months as the sold-out audience led ovation after ovation culminating in a raucous curtain call and post-show celebration that spilled out onto West 48th Street where the cast and band took to the fire escape of the Walter Kerr Theatre (219 West 48th Street) and led the crowd in celebratory jam session.

The evening started with an immediate standing ovation as the cast and band took to the stage with Tony Award winner André De Shields making his entrance with slow, confident grace bringing the audience to attention with his opening exclamation “Alright!” which kicks off the song “Road to Hell.”

There was a total of five standing ovations during the performance and when the show ended, the musical’s Tony Award-winning composer Anaïs Mitchell and Tony winning director Rachel Chavkin took the stage with other members of the creative team who had helped bring the show back to the Kerr.

After the performance, the festivities continued, when the cast and band, joined by Mitchell and Chavkin, came onto the theater’s fire escape and threw red flowers, an icon of the show, to the crowd that had gathered below. The cast and band jammed out to “Way Down Hadestown” and then the show’s music director and vocal arranger Liam Robinson led the crowd in “Lean on Me” the R&B standard written by legendary singer/songwriter Bill Withers.

A commercial Jingle for Regina Comet, the first completely new musical to premiere at an off-Broadway venue since the shutdown began, released today a composer’s demo lyric video of “One Hit Song”.

As previously announced, the cast of A Commercial Jingle for Regina Comet comprises of Bryonha Marie Parham (Prince of Broadway, “The SpongeBob Musical: Live on Stage!”) starring as ‘Regina Comet,’ who is joined by …Regina Comet creators Alex Wyse and Ben Fankhauser.

Two nobodies dream of writing one hit song for everybody, but their day job composing jingles for commercials isn’t the big break they hoped. That is, until they’re plucked from obscurity by a world-famous pop star named Regina Comet (if destiny had a child, it would be her) and she wants them to create an anthem for her supernova pipes… and her new perfume. They’re so close to the big-time they can smell it, but following your passion doesn’t always lead where you expect. Making a hit song can be a shit-show.

A Commercial Jingle for Regina Comet begins previews on Friday, September 17th, at the DR2 Theatre (103 E. 15th Street), with an opening night set for Monday, September 27th. The strictly limited engagement is set to run through Sunday, November 14th, 2021.

For tickets and information, visit MorningsAt7.com or Telecharge.com.