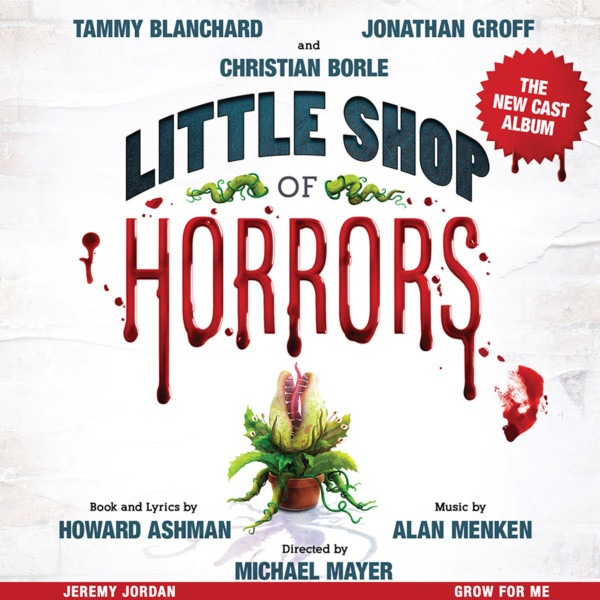 Ghostlight Records has released of the new single “Grow for Me” from Little Shop of Horrors – performed by Tony Award nominee Jeremy Jordan – today, Friday, September 17. Jordan will star as Seymour in the show’s acclaimed  revival when it resumes performances Off-Broadway at theWestside Theatre on Tuesday, September 21. The same day, the label will release Little Shop of Horrors – The New Cast Albumon CD, online, and in stores. This production is the recipient of 2020 “Outstanding Revival” Awards from the Drama Desk, the Drama League and the Outer Critics Circle. The recording, which was nominated for a 2021 “Best Musical Theater Album” Grammy Award, is currently available in all digital and streaming platforms. The album is produced by Alan Menken, Will Van Dyke, Frank Wolf, and Michael Mayer – and executive produced by the show’s producers, Tom Kirdahy, Robert Ahrens and Hunter Arnold. To stream or download the album, or pre-order the CD, please visit: www.ghostlightrecords.com/little-shop-of-horrors-new-off-broadway-cast-album.html. To stream or download the “Grow for Me”single, please visit: ghostlightrecords.lnk.to/JeremyJordanGrowForMePR

Seymour is a down-on-his-luck florist with a crush on his co-worker Audrey. When he discovers a mysterious – and voracious – plant, suddenly Seymour and Audrey are thrust into an epic battle that will determine the fate of the entire human race. With a book and lyrics by Grammy and Academy Award winner Howard Ashman (The Little Mermaid, Beauty and the Beast), and music by Tony and Academy Award winner Alan Menken (Aladdin, Newsies), Little Shop of Horrors first premiered Off-Broadway in 1982, where it made audiences laugh, scream, and give up gardening for good. The musical has since catapulted into a global phenomenon, with productions across the world from Broadway to London’s West End, to Asia and Australia – plus a hit 1986 film adaptation directed by Frank Oz that starred Rick Moranis, Ellen Green and Steve Martin. Now, the musical makes its highly-anticipated return home to Off-Broadway, in an intimate new production directed by Michael Mayer that offers an unprecedented opportunity to get close — maybe too close — to an incredible plant with an insatiable appetite.

In the spirit of welcoming new audiences, a new subscription package, Flip the Script, is available to those ages 30 and under. All five productions, three Broadway and two Off-Broadway, can be purchased for $140. See 2st.com for details.

In the playwright Richard Greenberg celebrates the personal and professional intricacies of America’s favorite pastime. When Darren Lemming (Jesse Williams), the star center fielder for the Empires, comes out of the closet, the reception off the field reveals a barrage of long-held unspoken prejudices. Facing some hostile teammates and fraught friendships, Darren is forced to contend with the challenges of being a gay person of color within the confines of a classic American institution. As the Empires struggle to rally toward a championship season, the players and their fans begin to question tradition, their loyalties, and the price of victory.

In the aftermath of the Napoleonic wars, a shy English spinster seeks to win back the love of the man she jilted eight years before. Jane Austen’s last and most romantic novel, Persuasion first appeared in print in 1818, and is a meditation on love and loss, and what is constant in a changing world.

Tickets are now on sale for Bedlem’s production of Persuasion at www.bedlam.org (833-4BEDLAM). Tickets range from $30 – $90, and the playing schedule is as follows: Tuesday through Saturday at 7pm, Saturday and Sunday at 2pm.

Complimentary seats will be available to underserved communities at every performance of PERSUASION.  561 tickets have been set aside in the first row of the theater to accommodate those who want to see live theatre but have been prevented from attending due to the cost of a ticket.  For full details please click here.

As previously announced, the world premiere production will be directed by Tony Award nominee Gabriel Barre (The Wild Party, Amazing Grace) and choreographed by Kenny Ingram (Emojiland). The book is written by Prisoner #11RO731*, with music by Austin Nuckols, and lyrics by Lily Dwoskin.

It’s one of Bill Clinton’s favorite political expressions: “When you see a turtle on a fence post, you know it didn’t get there by itself. It doesn’t belong there. You wonder who put it there.” And now, you’ll know, it’s not about the turtle!

Inspired by true events, A Turtle on a Fence Post fictionalizes the inside story of a prominent New Yorker thrown into an unknown world by New York’s most powerful man. At heart a vibrant tale of love and friendship, Turtle… uses humor and song to deal with themes of freedom, forgiveness and truth, revealing how meaningful learning can arise in the most unexpected places and from the most surprising sources.

A Turtle on a Fence Post, with an official Opening Night set for Sunday, November 14, will play a limited ten-week engagement through Sunday, January 2, 2022. All attendees will be required to show ID and proof of COVID vaccination.

Douglas Carter Beane’s new comedy announced that Kristolyn Lloyd has joined the cast of Fairycakes as Peaseblossom replacing Alfie Fuller who has departed due to scheduling conflicts. The world premiere is set for this fall at the Greenwich House Theater (27 Barrow Street), home to many of Beane’s first plays, beginning Thursday, October 14, 2021. Opening night is set for October 24th.Fairycakes is set to play a limited engagement through January 2, 2022.

An all-star cast of theatrical favorites comes together in this uproarious clash of A Midsummer Night’s Dream and old-world fairy tales. One night in the woods, puckish mischief leads to mismatched lovers from across all your favorite stories. And what begins as love at first sprite, grows into something more as the feelings from one midsummer night carry over to the bright light of day.  So come and sit for a spell. Because in this theater, magic is real.