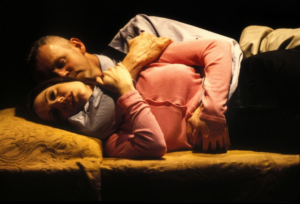 Manhattan Theatre Club, Lynne Meadow (Artistic Director) and Barry Grove (Executive Producer) and Daryl Roth, Cody Lassen, The Dodgers in association with the Vineyard Theatre have just announced the Broadway premiere of the Pulitzer Prize winning How I Learned to Drive by Paula Vogel, with original stars Mary-Louise Parker and David Morse, directed by Mark Brokaw.

This remarkably timely and moving memory play about a woman coming to terms with a charismatic uncle who impacts her past, present and future life.

This timeless – and timely – tale of redemption welcomes theatergoers of all ages into an immersive experience that’s brimming with Christmas spirit. It’s “a stunning piece of visual theatre” (Time Out) that features dazzling staging, moving storytelling and 12 of the most cherished Christmas carols, including “Joy to the World,” “Silent Night,” and “It Came Upon the Midnight Clear.”

The Loukoumi Make A Difference Foundation and the award-winning musical Come From Away have partnered to share their joint message of kindness in the new book Inspiring Stories That Make A Difference (Hybrid Global Publishing). The book features the stories of over 75 children who are having fun paying it forward for causes that mean something to them.

Inspired by Nick Katsoris’ children’s book series about a fluffy little lamb named Loukoumi, The Loukoumi Foundation teaches children to make a difference in their lives and the lives of others, uniting over 100,000 children annually to do good deeds. Come From Away is the Tony and Olivier award-winning musical about how during the week of 9/11, 7,000 stranded airline passengers found a safe harbor in Newfoundland and were embraced by the people of the town of Gander and the surrounding towns, while the world around them was thrown into chaos.

Inspiring Stories includes heartwarming essays from children around the globe:

The book also contains a collection of essays by over 20 students at Gander Elementary School—the town where Come From Away is set. Although they were not born on 9/11 when the small Newfoundland town rallied behind the 7,000 stranded airline passengers, the town’s legacy of good deeds has left its mark on this new generation of do-gooders. In fact, the week prior to the release of Inspiring Stories, these students from Gander will embark on a very special Loukoumi Good Deed Bus visiting places featured in COME FROM AWAY, doing a good deed at each. The Loukoumi Good Deed buses, inspired by the book Loukoumi’s Good Deeds (narrated by Jennifer Aniston), started in New York several years ago and have spread to other cities, including Chicago and Boston, uniting over 100,000 children.

Get ready to be inspired by these extraordinary kids who are changing the world one good deed at a time—and join us in making a difference!

Make a Difference With Loukoumi Week

The release of Inspiring Stories That Make a Difference is part of Make A Difference with Loukoumi Week with other events taking place as follows:

Saturday, October 19:  Loukoumi Good Deed Bus will tour Gander, Newfoundland. Students from Gander Elementary School will follow in the footsteps of their parents and grandparents, visiting many of the local locations featured in COME FROM AWAY, doing good deeds at each.

Monday, October 21:  The Loukoumi Foundation will launch the new Loukoumi Make A Difference Foundation Treatment Room and Literacy Program at St. Jude Children’s Research Hospital. As part of the program, while patients are receiving their treatments in the room, reading instructors will come in and help the children with their studies since they often have to leave their schools for months at a time to receive care. The program is funded by the donations of children, who make a caring card for patients and also donate $1 to fund this project. One of the essays in Inspiring Stories discusses the Loukoumi St. Jude room and another is by Alivia, a patient who is now raising funds for St. Jude to help, as she says, “the people who saved my life.”

Tuesday, October 22: The day of the release of Inspiring Stories That Make a Difference, all the young authors of the book and Loukoumi are invited to attend a performance of COME FROM AWAY on Broadway followed by a talkback with the cast.

Saturday, October 26:  The Loukoumi Good Deed Bus will tour Manhattan. Stops will include celebrity chef Maria Loi cooking with children at a local school, and then together they will bring the food to a local homeless shelter. Another stop will be at the 9-11 Tribute Museum, where bus riders and COME FROM AWAY families will write “Never Forget” cards and letters to families who lost loved ones on 9-11.

Monday, October 28: Celebrity Chef Maria Loi will host a tasting event in New York City with several celebrity chefs to launch a new program, “Loukoumi Feeds the Hungry,” where quarterly Maria will cook with a different school, and then together they will bring the food they cooked to a local homeless shelter. Maria is also featured in an essay by Lauren Berg, who was inspired to make a difference by the dream day Maria created for her at her restaurant Loi Estiatorio.

A reading of the new musical The Valley, a dramatic comedy about an (un)natural disaster in Iceland, will be presented September 19th at Pearl Studios.

The musical, written by an MIT grad and a monster enthusiast, is about four tourists who believe they have signed up for a volunteer trip to help “repair damage caused by local elements” in Iceland. And, technically, that IS what they’re doing. But definitely not in the way they expected. The journey they get wrapped up in brings the very problems they were running away from to the surface. At the heart of this supernatural saga is a deeply human story about redemption, taking action in the face of impossible odds, and what it means to “find a new normal”.

The writers are both alumni of the Graduate Musical Theatre Writing Program at NYU Tisch. The reading is being produced by members of The Alliance of Resident Theatres/New York and will be directed by Kevin Hourigan of Rattlestick Playwrights Theater.