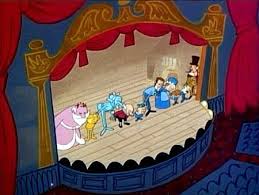 Don’t forget The Actors Fund in association with Dreamworks Theatricals, Classic Media and Margaret Styne will present a one-night only concert presentation of the holiday classic Mr. Magoo’s Christmas Carol on Monday, December 16 at 7:30 p.m. at the Gerald W. Lynch Theater at John Jay College (524 W. 59th St.). The evening will be directed by Carl Andress with choreography by Nathan Peck, based on original choreography by Marcos Santana. Grammy Award® and Emmy Award® winner John McDaniel has written new orchestrations for the score and will serve at the evening’s music director.

The concert will star Gavin Lee as “Mr. Magoo/Ebenezer Scrooge”, Sierra Boggess as “Belle”, ClaybourneElderas “Bob Crachit”, Kyle Selig as “Young Ebenezer,”  Matthew Scott as “Fred”, Michael Potts as “Jacob Marley”, Don Darryl Rivera as “the Ghost of Christmas Past”, Frederic Odgaard as “the Ghost of Christmas Yet to Come”, Klea Blackhurst as “the Charwoman”, Jennifer Cody as “the Laundress”, Jeff Blumenkrantz as “the Undertaker”,Stephen DeRosa as “The Old Man,” and Jeff Hiller as “The Director”.

Tony, GRAMMY and Emmy Award Winner Cynthia Erivo and Broadway star, Billboard #1 recording artist Shoshana Bean come together for a one-night-only Holiday Spectacular. After a sold out 2018 Apollo engagement, two of the most gifted singers on earth return to lift their voices for one incredible Night Divine. This musical match made in heaven brings a soulful glamour to the holidays, reimagining the sound and style of the season with 13-piece orchestra and an inspired collection of duet looks by star designers Christopher Palu and Christian Siriano. With the nostalgic elegance and candid humor of a Judy Garland Christmas special, Night Divine carries the torch of the most iconic showstoppers, burning brightly from the historic Apollo stage.

Night Divine is produced by the team behind Los Angeles’ beloved “For The Record” series as part of unique concert programming titled, “For The Record Presents.”

Additional casting to be announced soon.

The Woman in Black was first presented for a three-week run in the theater bar at the Stephen Joseph Theater in Scarborough England. It moved to the West End two years later. Numerous national and international tours have followed, but this site-specific reimaging for the McKittrick marks the first chance audiences will have to experience it as originally staged, in a pub, more than 30 years ago.  The play, written by Stephen Mallatratt, tells the story of a young lawyer who stumbles upon a small town with a grave secret.  Director Robin Herford reunites with actors Ben Porter and David Acton, who both starred in the London production for this New York engagement.

The Woman in Black will begin performances on January 8th at The Club Car at the McKittrick Hotel (home of Sleep No More), 542 West 27th St. with an official opening night set for Thursday, January 23rd.

An initial roster of artists and performers have been announced for the inaugural YI Love New York YiddishFest. Produced by the Yiddishkayt Initiative(YI) (Avi Hoffman, Producing Artistic Director) and Theater for the New City (Crystal Field, Artistic Director), the nine-day festival celebrates the legacy of the Yiddish language and its impact on entertainment and culture with readings, concerts, film screenings, lectures, panel discussions, and famous personalities in the world of Jewish culture from December 21-29. Tickets for all events are available online at www.yiddishfest.org.

Kicking off the festivities on Saturday, December 21 is The Heart of Yiddish: Remembering Isaiah Sheffer, an evening dedicated to Mr. Sheffer’s unparalleled contributions to the stage. Newly announced for the tribute areRochelle Oliver (Toys in the Attic, Scent of a Woman), Laura Patinkin (Fiddler on the Roof), and Leenya Rideout(Company, Cabaret, War Horse), Mary Brienza, and Kathryn Markey (founders of the comedy group The Chalks). At Symphony Space—which Sheffer founded—these performers will offer excerpts from the great works of Sheffer’s career, including The Theatre of Peretz, Yiddle with a Fiddle, Dreamers and Demons and The Rise of David Levinsky.

The following afternoon at The Center for Jewish History, original cast members from The Public Theater’s Songs of Paradise—including David Kener, Betty Silberman, and festival co-founder Avi Hoffman—will pay tribute in song to Joseph Papp in a Chanukah Concert: Lighting the World. Joining these reunited cast members are Allen Lewis Rickman, Yelena Shmulenson, and Sarah Gordon, daughter of the late Adrienne Cooper, who will round out the evening with Yiddish songs, Shakespeare, and excerpts from the Public Theatre production of Songs of Paradise, honoring Mr. Papp’s contributions to both Yiddish theatre and classical works. The evening concludes with a Yiddish Chanukah singalong and the lighting of the first candle with Manhattan Borough President Gale Brewer.

Fans of the Tony-winning play Indecent will get to hear original cast member and composer Lisa Gutkin who joins the YiddishFest lineup. On Friday, December 28th at 2pm, the Grammy winner lends her improvisational virtuosity on the violin to the New Voices reading of A People by L.M Feldman.

Lisa Gutkin will also be joining Mark York, Cy Coleman’s Musical Director, who lends his musical expertise throughout YiddishFest as its resident Musical Director. With his intimate knowledge of the Cy Coleman songbook, York will help a cast of talented actors and singers unearth the lost musical The Great Ostrovsky on Sunday, December 29 at 2pm. Coleman’s collaboration with author Avery Corman will close out the festival in a rarely-seen concert reading.

Tickets for YI Love New York YiddishFest are $18 per event, with some lectures and screenings free to the public. Space is very limited and reservations are required for all events. Sponsorship opportunities begin at $1,000 and include tickets to multiple tributes and events. For Tickets and information, call (888) YI-Love-J (888-945-6835) or visit www.yiddishfest.org. English subtitles and translations will be provided at all events.