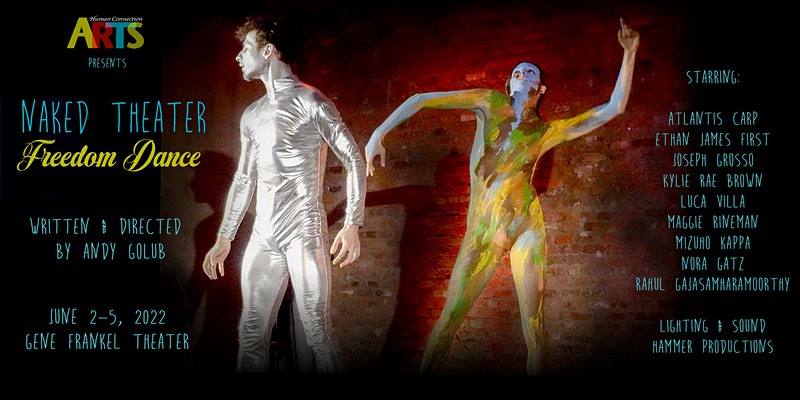 First it was painting naked bodies in Times Square. Now nude body painter and activist Andy Golub has moved on to naked theater. The artist has just produced an extraordinary show with yes, a naked cast, that is about to make its debut from June 2nd through June 5that Gene Frankel Theatre. 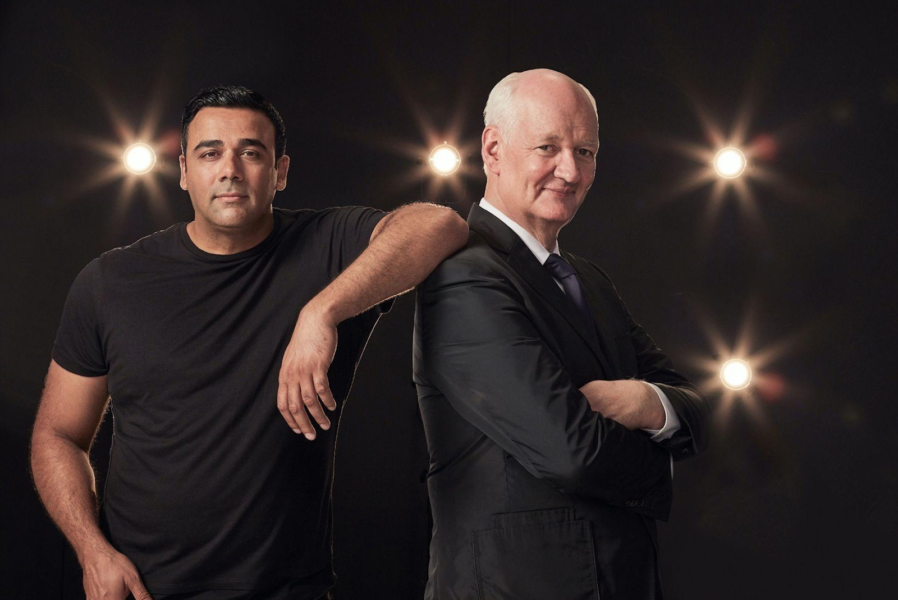 HYPROV: Improv Under Hypnosis, the international sensation from the brilliant minds of Improv and Comedy Legend Colin Mochrie (“Whose Line Is It Anyway?”) and Master Hypnotist Asad Mecci, will make its New York City premiere this summer. HYPROV is directed by Stan Zimmerman (“Golden Girls,” “Gilmore Girls”), and Tony Award winner Bob Martin (The Prom, The Drowsy Chaperone) serves as creative consultant. The 12-week limited engagement will play the Daryl Roth Theatre (101 East 15th Street at Union Square East) August 12 through October 30, with opening night set for Monday, August 22 at 7:00 pm.  Tickets are now available at www.hyprov.comThe 100-minute live show combines hypnosis and improv – two art forms that have mystified and entertained fans, skeptics and everyone in between worldwide – for a totally unique comedy experience that The Times of London declared “a celebration of the human imagination.”The evening begins with Mecci welcoming 20 volunteers on stage to be hypnotized. The four or five most receptive to hypnosis then join Mochrie to improvise the rest of the show, while fully under hypnosis. In the hands of two experts, and solely crafted from the volunteers’ uninhibited, unconscious minds, each show is an entirely original and completely unforgettable theatrical experience.“When a person is hypnotized, they no longer reflect on their behavior,” notes Mecci. “Hypnosis removes the filters and walls they’ve built up and allows them to be open to saying yes and being imaginative. That’s why they can do remarkable things on stage. You never know which hypnotized volunteer is going to become the next star of the show. It’s what makes the show so much fun – ordinary people doing extraordinary things!”Scottish-born Colin Mochrie is one of the most prolific improvisers on both sides of the pond today. He found his first line of work as a member of the Vancouver TheatreSports League where he met fellow improviser Ryan Stiles. He toured with The Second City comedy troupe until he auditioned for a brand new British TV show, “Whose Line Is It, Anyway?” After failing in his first attempt to get on the show, Mochrie spent eight years as a regular until it ended in 1998. He then joined the US version on ABC, appearing in every episode, and continues with the current revival on the CW Network, now in its ninth season having played 18 seasons in total and currently airing in over 100 countries. Mochrie has toured the world with fellow Whoser Brad Sherwood for the past 20 years, appears in the Second City Guide to Symphonies in front of orchestras all over North America and recently wrote his first collection of short stories, Not Quite the Classics, available on Amazon. This year, Colin was crowned the Last One Laughing on Netflix’ series of the same name.Asad Mecci’s jaw dropping comedy hypnosis performances have captivated audiences worldwide.  Over his 20+ year career on stage, he has performed in front of millions of people live and millions more through mass media.  Some of his stage credits include Just for Laughs Montreal and London, The Second City Toronto and the Edinburgh Fringe Festival.  You may have seen his talents on Entertainment Tonight, MTV, HGTV, and BBC and in publications such as the New York Times, Huffington post and the Chicago Tribune.   In 2015, Asad co-created HYPROV: Improv Under Hypnosis with International Comedy Icon Colin Mochrie from “Whose Line is it, Anyway”?  When not performing on stage, Asad works with major corporations as an expert consultant in the areas of motivation, advanced communication and stress management.  He also coaches Olympic athletes in the area of mental strength and peak performance.Stan Zimmerman’s long career covers multiple mediums (TV, film and theatre). He’s been nominated for two WGA Awards for Best Comedy Episodic Writing on the classic TV series – “The Golden Girls” and “Roseanne.”  Stan’s also written and produced on “Gilmore Girls,” co-created the Lifetime sitcom, “Rita Rocks” and wrote on both “Brady Bunch” movies. Stan has a BFA-Drama from NYU/Circle-in-the-Square and has directed such LA productions as the LatinX The Diary of Anne Frank, Entertaining Mr. Sloane, A Tuna Christmas, Gemini and his original plays — Meet & Greet, Knife to the Heart and Have a Good One.TRW Plays recently published and licensed three of Stan’s work — Yes, Virginia; Silver Foxes and his suicide notes play, right before i go. 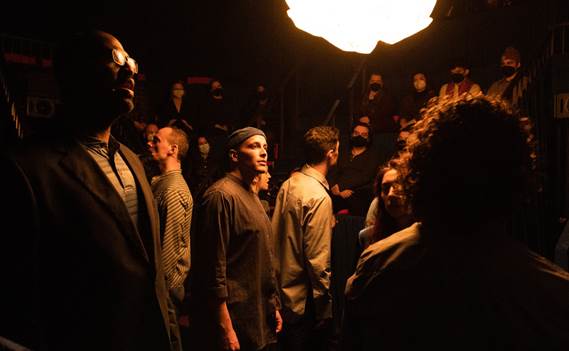 Due to positive COVID test results within the company, Ars Nova has canceled all remaining performances of Oratorio for Living Things. The production received a well deserved special award from the Drama Desk this year. More than 100 talented young NYC public school theatre artists will make their Broadway debuts in The Shubert Foundation’s 2022 High School Theatre Festival for NYC Public Schools on Monday, May 23 at 7:30pm at the Winter Garden Theatre (1634 Broadway) on Broadway. This annual high profile and high energy theatre education experience for NYC students is presented by The Shubert Foundation and the NYC Department of Education Arts Office.

The Festival celebrates five outstanding high school student productions from the 2021-22 school year, selected from more than 20 productions across the city by professional theatre artists and theatre educators. Over the course of the festival’s eight-year history, school productions from all five boroughs have performed at the event.

This year, student presentations from the following schools will present excerpted scenes and musical numbers in order as follows:

Dontrell, Who Kissed the Sea – Brooklyn High School of the Arts (Manhattan)

The High School Theatre Festival showcases the ongoing excellent theatre work currently taking place in NYC public high schools, as well as highlighting the positive effects of theatre study on skills for the stage and in life: collaboration, artistry, discipline, focus, literacy, student voice, self-awareness, presence, and empathy. The evening focuses on the impact that a full theatre program can have on students and school communities and enables students to see theatre and the arts as a potential career path.

JBR Productions, LLC will present three (3) industry readings (by invitation only) of Are You There?, a comedy about love, death, and the supernatural, written and directed by Javier Daulte and starring Josefina Scaro and Ben Becher. The readings will be held at Chain Theatre – Mainstage (312 West 36th Street – 3rd Floor) on Monday, May 23 at 4:00pm and Tuesday, May 24 11:00am and 4:00pm.

In the 20 years since its first production in Argentina, Javier Daulte’s Are You There? has become a major success throughout Latin America, Spain, Sweden and Australia. This North American premiere production began its development with a visit by Javier Daulte to New York in 2019, and although set back by the pandemic, continued to make progress. In February 2022, the piece was presented as a work in progress version of the play at Javier Daulte’s Theatre Espacio Callejon in Buenos Aires. Although performed in English, it was met with universal acclaim from an audience very familiar with the original.

Are You There? is a comedy and a love story about a New York couple, Anna and Frank, living together for the first time in a small and uncomfortable apartment. Impossibly in the chaos of moving boxes, problems with the heating and with the neighbor downstairs, there is also an invisible man, a poltergeist, who is not a bit happy about having roommates. This comedy about love and the supernatural has thrilled audiences from London to Buenos Aires as it brilliantly dissects a young couple’s complete inability to control anything, particularly each other.