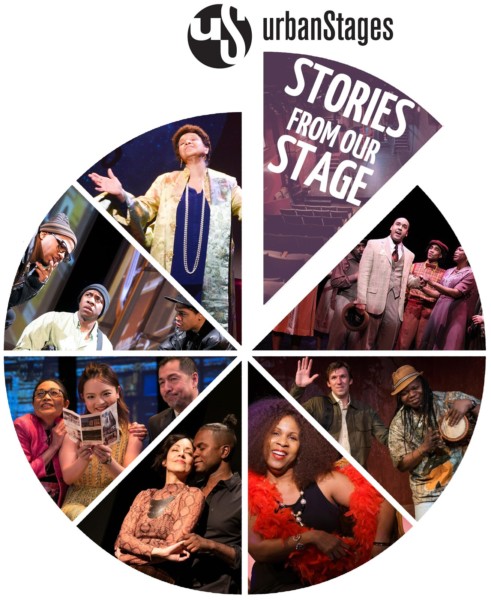 Urban Stages, a recent Telly Award Bronze Medalist for their streaming production of Heros & Villians, has a reputation of presenting interesting and diverse stories from a variety of viewpoints. Stories From Our Stage will feature excerpts from some of their more popular productions from playwrights including Sean Christopher Lewis (Dogs of Rwanda), Zhu Yi (A Deal),Langston Hughes, Walter Marks, and Kent Gash (Langston in Harlem), Greg Kalleres (Honky), Tony winner Trezana Beverley (Mable Madness), and Idris Goodwin (Bars & Measures) all as a lead up to Urban Stages opening their doors in July with CHARMED LIFE: From Soul Singing to Opera Star, written by and starring Lori Brown Mirabal.

Access for FREE will be available from June 25 thru June 28. Those who purchase Opening Night tickets ($150+) will receive early access starting June 24 at 7:30 pm and exclusive access to talkback with Michael Riedel, famed American theatre critic, broadcaster, columnist, and author. Opening Night tickets are completely tax-deductible and available at urbanstages.org

The Times Square Alliance Board of Directors appointed Tom Harris as the new President of the Alliance. Tim Tompkins stepped down as President in December 2020 after almost 19 years of extraordinary service. From the time Tompkins stepped down until the search process was complete, Harris served as Acting President and Chief Operating Officer, with Senior Vice President Regina Fojas as his deputy. The appointment was made effective on June 1, 2021.

Since 2008, Harris has overseen the Alliance’s operations, including its public safety and sanitation services, managing a staff of more than 120 employees. Prior to joining the Alliance, he spent 23 years at the New York City Police Department rising from patrolman to inspector. By the time he retired from the force, he was in command of three precincts in Brooklyn.

The Times Square Alliance works to improve and promote Times Square — cultivating the creativity, energy, and edge that have made the area an icon of entertainment, culture, and urban life for over a century. Founded in 1992, the Alliance keeps the neighborhood clean and safe, promotes local businesses, manages area improvements, and produces major annual events including New Year’s Eve, Solstice in Times Square, and Taste of Times Square. As the custodians of Times Square, the Alliance works every day to improve the quality of life for the neighborhood residents and businesses while driving economic growth in New York City. TimesSquareNYC.org

In celebration of Cole Porter’s 130th birthday on June 9th Stevie Holland will debut the filmed version of her Off-Broadway musical “Love, Linda: The Life of Mrs. Cole Porter.”  The show will premiere on Broadway On Demand on June 9th concluding  on June 23.  In addition,  the annual “Cole Porter Festival” in Peru, Indiana, will close the festival with a private screening of the musical on June 13.

Stage presentations of Love, Linda are currently being presented in theaters across the country and around the globe. www.lovelindathemusical.com.

Brooklyn, NY — Pop-Up Magazine, the acclaimed live magazine that sells out grand, historic venues across the country, is pleased to announce an all-new experience, with stories unfolding across the sidewalks, storefronts, and newsracks of your city.

The Sidewalk Issue invites you to discover film, sound, photography, illustration and more as you take a closer look at the neighborhood around you. This free, outdoor, self-guided experience runs from June 4–20 simultaneously in Hayes Valley (San Francisco), Downtown LA (Los Angeles), and Fort Greene (Brooklyn), presented with support from Google. The table of contents is a map which can be picked up from one of our partners in each neighborhood: the BAM Fisher in Brooklyn, Ritual Coffee Roasters in San Francisco, and Ace Hotel in Downtown Los Angeles. Or start your experience online and learn more at popupmagazine.com/sidewalk. (Hint: bring headphones or earbuds and a handful of quarters!)

You can explore each story outside at your own pace.

The stories are timely, surprising, emotional — a National Geographic photographer, an acclaimed novelist, a founding co-host of Radiolab, and a composer offer a unique look at the lives of jellyfish; a comedian and actor go inside the mind of a bicycle; a renowned graphic novelist explores work/life balance at epic scale; a dishwasher shares life lessons from nearly four decades in the kitchen of one legendary restaurant; a tabloid spills over with meditations on love from more than a dozen prominent artists and writers; and five brilliant artists tackle the question on all of our minds, where do we go from here?

Pop-Up Magazine produces unforgettable stories and live multimedia experiences, including our touring live magazine that sells out grand, historic venues across North America. We’ll be back onstage soon — and we can’t wait to see you in person. In the meantime, learn about new issues, tickets for future shows, and

eleven, a leading UK-based arts and theatre podcast, in association with the Broadway Podcast Network, is pleased to announce the creation of their international partnership. The podcast releases weekly interviews with leaders in the theatrical sphere, such as their next guest A Strange Loop’s L Morgan Lee – currently developing a stage adaptation of The Danish Girl – is available exclusively from the Broadway Podcast Network and elevenpodcast.com. Find it now at BPN.FM/eleven,