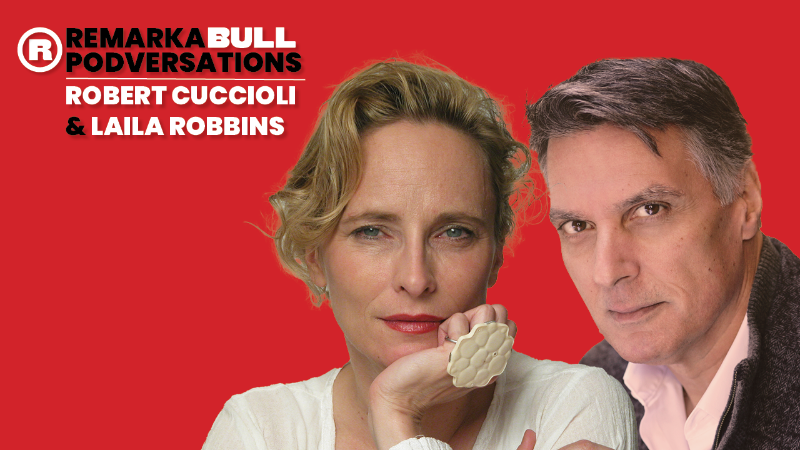 RemarkaBULL Podversations will present Exploring Antony and Cleopatra On Monday, March 1st. One of the classical theater’s power couples: Tony Award nominee Robert Cuccioli (Jekyll & Hyde) and Lalia Robins (“The Handmaid’s Tale,” “Homeland”, The Apple Family Plays) will join host Nathan Winkelstein, Red Bull’s Associate Artistic Director, for a conversation focused on Shakespeare’s power couple, Antony and Cleopatra. The conversation will examine the quarrel from the third scene of the first act (‘I am sick and sullen’) of Antony and Cleopatra. They’ll read the scene and discuss their approach to character development and romance on stage. They will take your questions through live chat.

With Red Bull Theater, Laila Robins appeared in Strindberg’s The Dance of Death (2013) and Robert Cuccioli was featured in The White Devil (2019). to find out more click here

Woodie King, Jr.’s New Federal Theatre (NFT) celebrates Black History Month,” with a virtual reading of “The Meeting” by Jeff Stetson on February 20, 21 and 22, all at 7:00 PM.  The play, whose premiere was presented by NFT in 1987, is an imaginary encounter between Martin Luther King Jr. and Malcolm X in 1965 in a hotel in Harlem. Differing in their philosophies but alike in their mutual respect, the two men debate their varying approaches to the same grave social problems. Both are prepared to die for their beliefs but neither is aware of how soon assassins’ bullets await them. The play was televised on American Playhouse in 1989.

The reading will be free and accessible from NFT’s website, https://www.newfederaltheatre.com. Donations will be gratefully accepted.  Directed by Ajene D. Washington, it features Joseph L. Edwards as Dr. Martin Luther King, Beethovan Oden as Malcolm X and Tyler Fauntleroy as Malcolm’s bodyguard.

New episode of “Broadway Profiles with Tamsen Fadal” will feature Broadway favorites including Tony Award nominee and Zoey’s Extraordinary Playlist star Peter Gallagher discussing the hit NBC show and his daughter, Jagged Little Pill star Kathryn Gallagher’s nomination for a Tony Award; Tony-winning actress Lena Hall sharing what is in store for season two of the hit TNT series “Snowpiercer;” Shereen Pimentel (West Side Story) revealing how excited she is to return to the show as a new person with everything she’s learned about herself since the Broadway shutdown; Broadway star Cheyenne Jackson chatting about his takeover of the small screen in the new Fox hit series “Call Me Kat;” Film star and Broadway “Fresh Face” Nick Robinson (To Kill a Mockingbird) explaining his full-circle moment while taking on Jem Finch; and much more.

“Our mission has always been to support non-profit theater companies’ Off Broadway premieres. The Covid Relief grants are an extension of what 59E59 Theaters was designed to do,” says Elysabeth Kleinhans, founder of the Elysabeth Kleinhans Theatrical Foundation and Founding Artistic Director of 59E59 Theaters. “We believe we should find new ways to further our mission when we cannot provide the venues to do so.”
The Covid Relief Grant recipients are:

Hypokrit Theatre Company
For the development of a theatrical project Finding Paradise with book, music, and lyrics by Aya Aziz, directed by Arpita Mukherjee.

Finding Paradise is a memoir musical that follows an Egyptian-American family across continents and generations as they search for home and belonging in the post 9/11 world. Through the musical, which is an expansion of the sold-out musical Eh Dah: Questions for my Father at Next Door at New York Theatre Workshop, Aya explores deeper the traumas that shape the Middle East through a transnational, inter-generational story of her own family.

About marchons marchons
marchons marchons chronicles the glory days of the Jacobins — the most radical wing of the French Revolutionaries — as they topple the monarchy, the aristocracy, the church, and all the bootlicking class traitors who supported the old regime. But personal dynamics, petty arguments, and even an ill-timed love triangle or two threaten to undermine the movement. marchons marchons explores the messiness of revolution, from the intimate to the ideological, and the challenges of letting go of your individual ego to fight for a future you may never live to see, for the freedom of someone you don’t know.

About  Ink’d Well
When Kendra finds out that her brother, Issac, has died in a terrible accident, she returns to her childhood summer home on Martha’s Vineyard. As the mystery behind his death is unraveled, she discovers that he was drowning in much more than water. Meanwhile, a childhood ghost story about a “sea witch” haunts Kendra. The story, paired with her grief, begins to impact her relationship with her family and her relationship with the ocean itself.

About Noor Theatre’s Commissioning Initiative
Noor Theatre’s Commissioning Initiative was created to help build the canon of work by artists of Middle Eastern and North African (MENA) descent. Their commissioned pieces illustrate the breadth and richness of MENA’s many diasporic communities, challenge the harmful stereotypes of Middle Easterners rampant in popular media, and advance important conversations within our communities. The MENA diaspora is not monolithic, and Noor’s pieces reflect the unique voices and perspectives of their artists. The Commissioning Initiative furthers representation for artists of MENA descent through two programs: New Play Commissions and Cross-Medium Commissions. New Play Commissions are awarded to playwrights, who embark on a full-length play development process with Noor. With the support of Pop Culture Collaborative, Cross-Medium Commissions are awarded annually to three writers, who, over the course of a year, develop a script in a medium of their choice (such as film, television, VR, etc.) designed to reach a mass audience.

PlayCo
To continue and complete their virtual work on Django in Pain – Act One, created by Antonio Vega andAna Graham from Por Piedad Teatro, with music by Cristóbal MarYan.

About Django in Pain – Act One
Antonio Vega and Ana Graham are two isolated theatre artists creating this piece inside an apartment in NY, plus a musician (Cristobal MarYán) composing the music in Mexico City, also while in isolation. They explore the possibilities of using a glass-top drawing desk as a stage for Django in Pain. Transforming the desk into a wooden cabin, and using shadows and light, tabletop puppets, marionettes, and everyday objects, they tell the story of a depressed playwright who wants to write a happy, uplifting story about a sad man who wants to kill himself but can’t because now he has to take care of a three-legged dog.

59E59 Theaters was established by the Elysabeth Kleinhans Theatrical Foundation in 2004 to grant professional space and expertise to non-profit theater companies premiering their work in New York City. Under the leadership of Val Day, Artistic Director, and Brian Beirne, Managing Director, 59E59 Theaters presents a year-round curated program of Off Broadway plays and musicals that are nurtured and supported through highly-subsidized rental rates, as well as production, ticketing, front-of-house, marketing, and press support.

Suzanna BowlingFebruary 5, 2023
Read More
Scroll for more
Tap
Get Ready For The Drama League’s and ​Red Bull Theater​’s DirectorFest 2021
What to Watch in The New Year: February 19