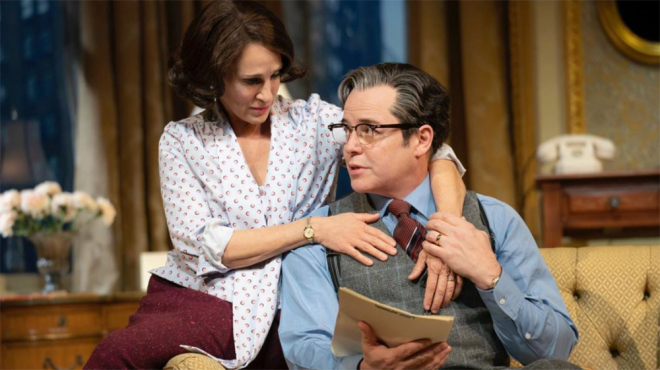 Sarah Jessica Parker and Matthew Broderick return to Broadway in Neil Simon’s “Plaza Suite,” on Feb. 25, 2022 at the Hudson Theatre with opening night set for March 28.

The upcoming revival of Neil Simon’s play “Plaza Suite,” in which the real-life couple will portray a series of dysfunctional duos, is scheduled to begin preview performances on Feb. 25, 2022 at the Hudson Theatre with opening night set for March 28.

“We’re overjoyed to finally be able to welcome Broadway audiences to the Hudson Theatre to see Neil Simon’s celebration of New York, New Yorkers, and the wonderful ways they fall in love,” Broderick and Parker said in a statement. “We simply can’t wait.”

Tectonic Theater Project (Moisés Kaufman, Founder & Artistic Director) and Madison Wells Live are pleased to announce that due to overwhelming demand, their production of Seven Deadly Sins, which opened last night to critical acclaim, is extending by one-week with tickets available via www.sevendeadlysinsnyc.com or via TodayTix at www.todaytix.com  or through the iOS and Android app.

Andrew Lloyd Webber joins icons of wedding and marriage such as Felix Mendelssohn, Martha Stewart, and Vera Wang with the release of the London Gay Men’s Chorus recording of “Marry For Love,” the wedding march from Webber’s upcoming romantic musical comedy Cinderella, which began previews on Friday ahead of a Wednesday, July 14 opening night at the Gillian Lynne Theatre in London’s West End.

Following a prolonged lockdown which restricted public gatherings and prevented in-person rehearsals and performances, 200 members of the London Gay Men’s Chorus gathered for the first time at the Theatre Royal Drury Lane to record the song.

This version of “Marry For Love” is being released in celebration of Pride and is available on all music services. The Polydor/UMe full album of Cinderella will be released on Wednesday July 9 featuring voices from the cast of the highly anticipated new musical, as well as some soon-to-be announced, high-profile guest vocalists.

Ephraim Sykes, has just exited the production of MJ to film a movie and newcomer Myles Frost takes over as the King of Pop in the upcoming Broadway production MJ: The Musical. MJ will begin performances on December 6, 2021, with an opening night set for Tuesday, February 1, 2022, at the newly refurbished Neil Simon Theatre in New York.

Second Stage Theater has announced dates for four of its upcoming productions, including the Broadway stagings of Lynn Nottage’s Clyde’s and Richard Greenberg’s Take Me Out.  The Broadway plays will be staged at the Hayes Theater (240 West 44th Street) and the Off-Broadway productions will be presented at the Kiser Theater (305 West 43rd Street).  Casting and single ticket information for all productions will be forthcoming.
CLYDE’S by Lynn Nottage, directed by Kate Whoriskey, will begin previews on Wednesday, November 3, 2021 and officially open on Monday, November 22, 2021.

TAKE ME OUT Richard Greenberg’s Tony Award-winning play, TAKE ME OUT, directed by Scott Ellis, will begin previews on Broadway on Wednesday, March 9, 2022 and will officially open on Monday, April 4, 2022.

LETTERS OF SURESH written by Rajiv Joseph and directed by May Adrales, will begin previews at the Kiser Theater on Tuesday, September 14, 2021 and will officially open on Monday, October 4, 2021.

TO MY GIRLS written by JC Lee and directed by Stephen Brackett, will begin previews at the Kiser Theater on Tuesday, March 22, 2022 and will officially open on Thursday, April 14, 2022.

Production dates for the Broadway premiere of Stephen Adly Guirgis’ Pulitzer Prize winner, BETWEEN RIVERSIDE AND CRAZY, directed by Austin Pendleton, will be announced at a later date.

Broadway On Demand was honored with a 2021 Emmy Award® Nomination in Outstanding Arts and Popular Culture Programing for their original series Broadway Master Class. The National Academy of Television Arts & Sciences (NATAS) announced the nominees Monday, June 28th during a virtual event hosted by Courteney Cox on Emmys.com.

Lori Brown Mirabal’s play with music, Charmed Life, From Soul Singing to Opera Star beginning performances on July 9, in advance of its Wednesday, July 14 opening night. The play will enjoy a limited run through August 1, 2021 at Urban Stages Theatre (258 W 30 Street). Tickets are $30 (previews are $20) and available by visiting urbanStages.org or by phone at 1.866.811.4111.

Charmed Life, was the last production to perform at Urban Stages before COVID shut theatres down around the country. Directed by Vincent Scott, Charmed Life, is a musical journey from Mirabal’s hometown of Nashville, to opera stages across the world. She toasts entertainment luminaries, including Oprah, Cab Calloway, and Pavarotti, that had a hand in her rise, and salutes the black opera singers that paved the way. With comedy, storytelling, and show-stopping musical numbers, Mirabal brings you inside the world of opera and, inside her efforts to spread the art form, especially to the next generation. Charmed Life is a feel-good play about opera, being open to opportunities and grabbing hold of the luck that comes your way.