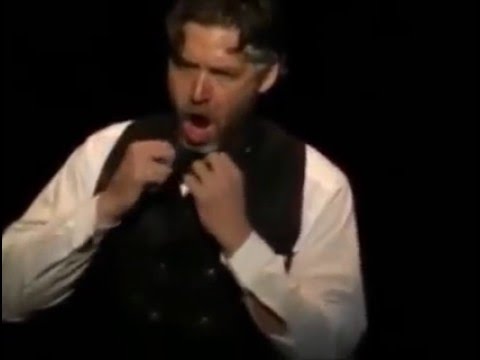 “The Phantom of COVID has hit Broadway,” New York Senator Chuck Schumer stated as he advocated for the Save Our Stages Act, a bill he has co-sponsored that provides relief to live venues across the US for severe loss of revenue and potential closures due to the COVID-19.

Authored by Amy Klobuchar and John Cornyn, would provide a total of $10 billion in grants over the next six months to live venues across the country. The funds would be flexible and go up to $12 million dollars for Broadway theatres.

Broadway is shut down through at least January 3, 2021, but industry experts are predicting a longer hiatus.

You can watch the whole speech here.

spent nearly 3 years starring as‘ The Phantom” in Broadway’s longest running smash hit musical The Phantom Of The Opera. An award winning Broadway star, international concert artist and speaker, James won the LA Ovation Best Actor Award for his portrayal of ‘Jean Valjean” in Les Miserables and was nominated for the Drama Desk, Drama League and Outer Critics Awards for Best Actor in a Musical for his portrayal of Sydney Carton in the Broadway musical version of A Tale of Two Cities. He also won the Sarasota Magazine Best Actor Award for the Asolo Rep pre-Broadway production. He has starred on Broadway in such Tony-Award winning shows as Stephen Sondheim’s Assassins, Disney’s Beauty and the Beast as The Beast, Carousel as Billy Bigelow, Urinetown as Officer Lockstock and as Edward Rochester in Jane Eyre (Drama League Award nomination). He also appeared in the Broadway production of Cyrano and the national tour of The Secret Garden as well as multiple television and film credits to his name.

His CD Bring Me Giants is available on iTunes and additionally his voice can be heard on the international recording of A Tale of Two Cities, the PS Classics Grammy Award Nominated recording of Assassins, the Sony Classical cast recording of Jane Eyre, The Gift on Geffen Records, the upcoming release of Frank Wildhorn’s Dracula, as well as on the live CD recording of his self-produced stage show Broadway in Concert (for which he won an LA WEEKLY Garland Award).

The League of Professional Theatre Women (Mary E. Hodges and Shellen Lubin,  Co-Presidents), an organization which has been championing women in the professional theatre for over three decades, announces their 38th season of programming, events, and advocacy along with new officers and board members. All events this season will be presented online via Zoom, unless otherwise noted.

Oral History November 2020 & Spring 2021 Oral History Project is an ongoing program of the League of Professional Theatre Women in partnership with the New York Public Library for the Performing Arts, which chronicles and documents the contributions of significant theatre women in all fields. This season the League will present two online Oral History events in the fall of 2020 and the spring of 2021, with interviewers and interviewees to be announced.

LPTW Rachel Crothers Leadership AwardDecember 7, 2020 Named in honor of Rachel Crothers and awarded in the spirit of her selfless service to her fellow Americans while simultaneously making significant contributions to the American theatre, the LPTW Rachel Crothers Leadership Award is given to a theatre woman who has distinguished herself in exemplary service and sacrifice for a common cause—a cause which leaves our society and the world a little better than the way we found it. This year’s exceptional honoree will be announced in September.

Theatre Women AwardsMarch 2021The League of Professional Theatre Women’s annual Theatre Women Awards are dedicated to promoting the visibility of the theatrical work of women artists and their contributions to the field, across all disciplines. For decades the LPTW has celebrated women who are consistently creating and working in every facet of the theatre industry. The diversity in disciplines exemplifies the vast talents theatre women contribute to the art-form. Although some of these positions are not often recognized, they are critical to the success of the theatre industry, and the LPTW is proud to recognize their vital work in our community. The 2020-21 Theatre Women Award honorees will be announced in December 2020.

New York Theatre Barn will present its final Choreography Lab of 2020, New Technologies / Endless Possibilities on Monday, October 26th, at 8PM EDT. Taking inspiration from theatrical television events, this lab will be streamed live from Broadway Dance Center in New York City. The company will select two choreographers who will work with an ensemble of dancers to create choreography from two never before staged musicals.

In the New Technologies / Endless Possibilities lab, the company is thrilled to explore excerpts from the original musicals I Don’t Want to Talk About It and Sueños: Our American Musical. Through humor, empathy, and brutal honesty, Ben Caplan’s I Don’t Want to Talk About It is a rock musical that pushes the boundaries of how society discusses mental health. Jesse Sanchez and Jeff Chambers’ Sueños: Our American Musical is a new Latinx musical that follows three generations of a Mexican-American family in their pursuit of the American Dream. Both shows were featured in NYTB’s New Works Series.

New York Theatre Barn will select two emerging choreographers who are passionate about the development of new musicals. The choreographers chosen will present new works in two different ways: once as conceived for a traditional proscenium stage, and once as conceived for a live television broadcast. The company will partner with Full Out Creative who will collaborate with the choreographers to discover new ways of presenting dance for the screen, while also working with New York Theatre Barn to evolve its programming and theatrical storytelling systems. Both choreographers will also join lab curator Avital Asuleen for a conversation about creating dance for the stage versus the virtual stage.

For the first time in the lab’s history, this lab will feature a new mentorship component pairing each choreographer with an established mentor choreographer. This mentor will meet with both the choreographers and the writing teams to discuss an initial approach into the work, and will provide feedback during their rehearsal process. New York Theatre Barn is thrilled to present this educational opportunity during these unprecedented times.

Choreographers interested in applying for this lab can visit this link on New York Theatre Barn’s website for the lab’s application information. While the rehearsal schedule for this opportunity is flexible, choreographers must attend the lab presentation in person. Please note: while the lab continues to maintain a general open submission policy, submissions for this lab opportunity must be received by the end of the day on Monday, September 28th, 2020.

Funded in part by a generous gift from the Amber Foundation, the Choreography Lab was created to elevate and expand the use of dance in musical theatre, and is also the only curated choreography platform where choreographers and writers collaborate to develop movement for new musicals during incubation. For more information, visit: www.nytheatrebarn.org.

Suzanna BowlingJune 20, 2022
Read More
Scroll for more
Tap
What To Watch September 21st To Take Away The Blues
Bet in India online betting on certified 1xBet site with a great line