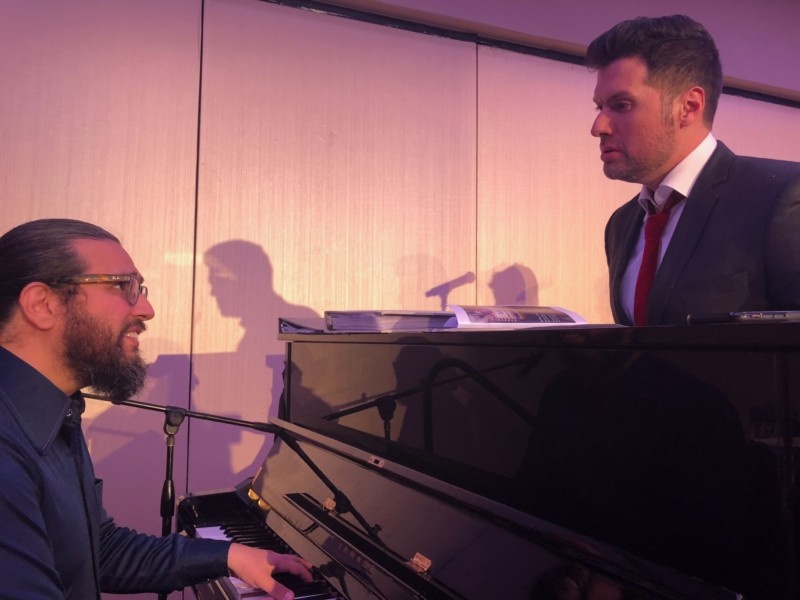 New York Theatre Barn will continue to host weekly free live streams of its New Works Series each Wednesday evening at 7PM ET. Upcoming installments of the series include excerpts from the new musicals The King’s Wife, Love and Southern D!scomfort, Shapeshifters: A Queer Comic Book Musical, Present Perfect and more. Available on New York Theatre Barn’s YouTube channel and Broadway on Demand, the live 45-minute series includes excerpts from two new musicals and a conversation with the writers and creative team.

In Salem, Susannah, Bridget, Miriam, Martha, Rebecca, & Mary are held hostage in a modern day courtroom for their collective trial by judge and jury. We marvel at the mass hysteria, we deliberate, and we ultimately are a part of deciding the fate of these six women. Follow the twists, switchbacks, and real-life discoveries that are made as we speculate: Why did this happen? How did this happen? And, heaven forbid, could it happen again now?

High school bully and comic book genius, Mel, discovers a hidden plane of existence called Queer Time, simply by drawing scenarios with pen and paper. In Queer Time, Mel joins the ranks of an underground network of Queer and Trans superheroes called The Shapeshifters. As Mel and the Shapeshifters sprint toward uncertain futures, this tribe of queer heroes must rely on community to persist, resist, and survive their living nightmares.

When dowager Mrs. Catheine Dejoie, of polite Louisiana society, dies, she leaves the entire estate to her estranged granddaughter, Milla, but only if Milla comes home from her self-imposed, decade-long exile to bury Catherine. Milla reluctantly leaves her life in France and returns to her ancestral home, a sprawling postbellum Southern mansion, and to her mother, a faded alcoholic debutante undone by the burden of bearing the family’s legacy. With the help of the family’s cherished maid, the women begin to repair their relationship until the reconciliation grinds to a sudden halt when a long-held secret is uncovered.

Present Perfect. Music and Additional Spanish Lyrics by Jaime Lozano. Book and Lyrics by Nancy Nachama Cheser. Featuring performances by Mauricio Martínez (On Your Feet!) and Stephanie Lynne Mason  (Fiddler on the Roof)

A young woman steps outside the confines of her insular ultra-Orthodox community in Brooklyn and finds herself as much an immigrant in a new land as the recently arrived students she teaches in her New York Adult English class.  Lives intertwine as each in their own way struggles to belong, find love, and succeed in a new country. Life changes in an instant when an earthquake rocks a village in Peru, sending aftershocks throughout the classroom, and each must decide how far they will go to protect those they love. Present Perfect is a uniquely American story told with a contemporary twist, infectious vitality and a Latin beat.

The King’s Wife is a new musical that uniquely re-tells the relationship between Catherine of Aragon and Anne Boleyn, the first two wives of King Henry VIII of England. While historical accounts paint these women as bitter enemies, The King’s Wife (using historic clues) flips the script to tell their tale differently – the story begins with them as like-minded good friends – plotting and executing ideas for the people and the future before they are stripped of choice, options and each other in a devastating game of politics and power. It’s an untraditional period piece with a dark, progressive vibe, and a moving, hopeful story about female friendship and the detriment to the world when great women aren’t allowed to rise.

Metropolis is an epic tale that follows the Harmonizer-android-unit turned space-time-continuum anarchist Fari as she is wrenched across space and time. With the Apocalypse hot on her heels in the past and the future, Fari keeps finding herself at the center of world-defining moments. But will she be able to withstand the upheaval? Or will she crack under the pressure?

Minnesota. March, 1999. Young mother Bethany Clearwater has just inherited a house in the dilapidated factory town of Oak Pines, where she moves with her troubled teenage daughter Belinda. Bethany plans to finally escape their nomadic past and make a fresh start. But when Belinda, just two months away from graduating high school, runs away on her first day of school, Bethany turns to desperate and ridiculous measures to ensure a bright future for her daughter…and maybe a second chance for herself. The Clearwaters is a hilarious and thoughtful exploration into the myth of the American Dream, stolen identity, and a mother and daughter finding their best selves in the unlikeliest of places.

In the land of Elflán, life and beauty flourishes. We meet Adelita, an adventurous and curious young elf eager to find what lies beyond the horizon. When the evil spirit of La Mancha kidnaps her mother and destroys her home, Adelita is forced to travel north to the land of the Hadaseñas in hopes of being reunited with her again. With fairy tales and mythological themes, Little Duende comments on real world matters as it explores the border crisis, dual citizenship and the consequences of a dark family secret.

The New Works Series is produced and hosted by Jen Sandler and Joe Barros. Since March, the company has presented 24 virtual installments of its New Works Series (among other programming), has presented 50 new musicals, and lifted up the work of 86 writers and over 200 artists. For more information, visit New York Theatre Barn’s website: www.nytheatrebarn.org.

Producers Tom Hulce and Ira Pittleman announced today that one of the most read and talked-about novels of the late 20th century, Laura Esquivel’s 1989 masterpiece, Like Water For Chocolate, is being developed for the stage as a brand new musical. Featuring entirely original music by the Grammy Award-winning Latin group La Santa Cecilia, with lyrics by La Santa Cecilia & Pulitzer Prize winner Quiara Alegría Hudes and a book by Lisa Loomer, Like Water For Chocolate will be directed by Tony Award winner Michael Mayer.

Tonight, as part of the digital concert event ¡Viva Broadway! Hear Our Voices, La Santa Cecilia will premiere a section of never-before-heard music from the musical. To view this exclusive, sneak peek performance, please visit BroadwayCares.org.

“In times of waiting many wonderful things happen. Dreams take shape and become voices, harmonies, dance,” Ms. Esquivel said in a statement. “The musical Like Water for Chocolate waited until a group of extraordinary dreamers came together: La Santa Cecilia and Quiara Alegría Hudes, Lisa Loomer and Michael Mayer, and Tom Hulce and Ira Pittelman, the ideal group to give voice to the culture that runs through our veins and waited years to be seen and heard. My thanks to all of you for dreaming the dream of a dream.”

One of the most sensual stories ever told, Like Water For Chocolate centers around an epic battle between familial obligation and romantic desire in turn of the century Mexico, while celebrating the rich land’s culture and cuisine like no novel before or since. This feminist fable of tradition, rebellion, and uncontrollable passions has been leaving readers breathless for more than 30 years. The novel has sold millions of copies around the world and has been published in 45 different languages. In 1993, it was adapted into an Award-winning film by the same name, which became the highest-grossing foreign-language film ever released in the United States and Canada at the time. The film earned ten Ariel Awards® including the Best Picture and was nominated for a Golden Globe Award® for Best Foreign Language Film.

SoloChicago Theatre’s hit production of The Unfortunates is now available for viewing on any device through vimeo.com/ondemand/theunfortunates. 24-hour streaming rental is $10. Based on a true story, THE UNFORTUNATES, set in Victorian London, follows Mary-Jane Kelly, a down on her luck “unfortunate.” One night she encounters a stranger alone in her local tavern. Will this mysterious gentleman buy her safety for the night or turn out to be Jack the Ripper? The New York Times called it “haunting and engrossing” and Time Out New York gave the new play 4 stars stating, “It achieves a rare combination of pathos and humor, breathing fresh life into women we might have otherwise think of only as long-dead prey.” Winner of the Gloria Ann Peter and Susan Glaspell playwriting awards, Aoise Stratford’s The Unfortunates is a rich and riveting exploration of an unforgettable moment in time, and a woman who deserves to be remembered for much more than her death. The Unfortunates is performed by Jeff Award nominee Gail Rastorfer, under the direction of Kurt Johns. A hit at the 2013 New York Fringe Festival For more information, visit www.SoloChicagoTheatre.com.