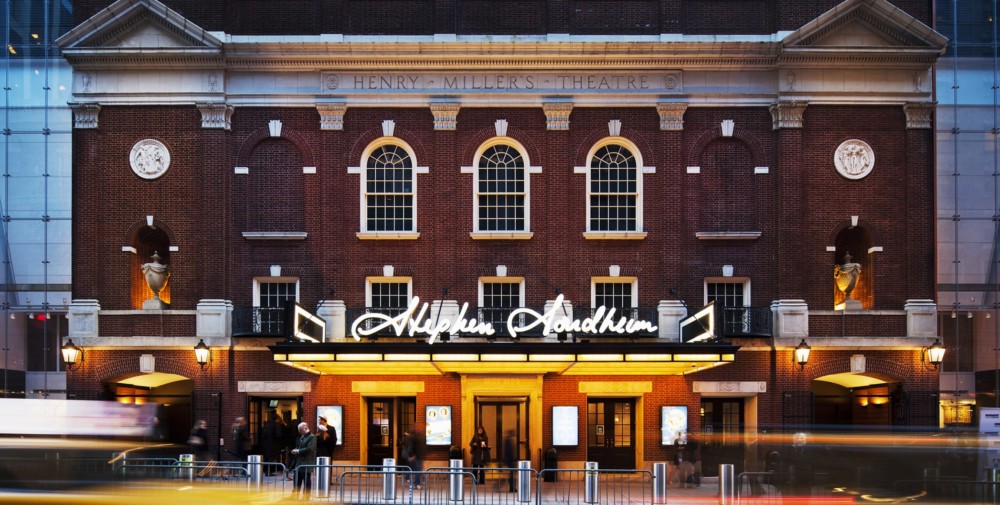 The Broadway community mourns the loss of prolific composer and lyricist Stephen Sondheim, who passed away on November 26, 2021 at age 91. To commemorate his life and work, the Committee of Theatre Owners will dim the lights of Broadway theatres in New York for one minute on Wednesday, December 8 at exactly 6:30pm.

“It is impossible to measure Stephen Sondheim’s impact on the world of musical theatre,” said Charlotte St. Martin, President of The Broadway League. “During a career that spanned nearly 65 years, he created music and lyrics that have become synonymous with Broadway—from Gypsy and West Side Story to A Funny Thing Happened on the Way to the Forum, Follies, Into the Woods, Sweeney Todd, Sunday in the Park with George, and too many more to name. It is hard to imagine Broadway without him, but we know his legacy will live on for many years to come, including in this season’s revival of Company opening December 9.”

The Stephen Sondheim Theatre, formerly Henry Miller’s Theatre, was dedicated in March, 2010. Mr. Sondheim is one of only three composers whose name adorns a Broadway theatre (along with George Gershwin and Richard Rodgers).

His full Broadway biography can be found on the Internet Broadway Database:

Tonight was a critic night and Patti LuPone was out. Her understudy Anisha Nagarajan went on. The show also stopped twice due to technical difficulties. The first time Christopher Sieber and Greg Hildreth came out, vamped, told stories, answered questions. It was unclear what the issue was that time. The second time one of the moving set pieces started to crush as it was moving down into the stage. Could Patti LuPone be haunting the show?

American Utopia has canceled two performances (so far) this week due to “non-Covid-related illness.” I find this surprising, unless it’s David Byrne who is ill. Don’t Broadway shows typically use understudies or standbys in these situations, rather than canceling performances?

Based on the television special by Bill Melendez and Lee Mendelson, and adapted for the stage adaptation by Eric Schaeffer, by special arrangement with Arthur Whitelaw and Ruby Persson. A Charlie Brown Christmas: Live on Stage is produced by Gershwin Entertainment / Todd Gershwin.

Charles M. Schulz’s Emmy and Peabody award-winning story has been a longstanding tradition, warming the hearts of millions of fans since it first aired on television over 50 years ago. Now, the live stage adaptation of the classic animated television special brings all your favorite characters to life -all set to the original special’s dialogue as well as the unforgettable sounds of the classic Vince Guaraldi musical score. A Charlie Brown Christmas: Live on Stage celebrates the timeless television classic as the whole family can join Charlie Brown, Snoopy, Lucy, Linus and the rest of the Peanuts characters in their journey to uncover the true meaning of Christmas. After the final bow, the show crescendos into a celebration of song as the audience is invited to join the Peanuts gang in singing traditional Christmas songs and carols.

Save the Date! The Theatre World Awards Board of Directors, Dale Badway, President, has announced, today, the return to a live in-person presentation of the 76th Annual Theatre World Awards Ceremony that will take place on Monday evening, June 6, 2022 beginning at 7:00PM. Theater venue will be announced in spring 2022.

2022 Honorees for the Theatre World Award for an Outstanding Debut Performance in a Broadway or Off-Broadway Production, the 13th Annual Dorothy Loudon Award for Excellence in the Theater, and the 9th Annual John Willis Award, will be announced in the spring of 2022.

First presented in 1945, the prestigious Theatre World Awards, founded by John Willis, the Editor-in-Chief of both Theatre World and its companion volume, Screen World, are the oldest awards given for Outstanding Broadway and Off-Broadway Debut Performances. The Theatre World Awards are presented annually at the end of the theatre season to six actors and six actresses for their significant, reviewable, debut performances in a Broadway or Off-Broadway production. The ceremony is a private, invitation-only event followed by a party to celebrate the new honorees and welcome them to the Theatre World “family.”

Earlier this year, The Theatre World Awards held a virtual event to honor Broadway’s best with a Special Gala Award Benefit to help raise funds for the prestigious Theatre World Awards_. The 2021 Special Honorees were Patti LuPone and André de Shields who were awarded the 8th Annual John Willis Award for Lifetime Achievement in the Theatre, and Theatre World Alum Audra McDonald (Carousel) was awarded a special 12th Annual Dorothy Loudon Award for Excellence in the Theater to honor her overall excellence and contribution to the theatre world.

The -Celebration of 75 Years of the Theatre World Awards_ can still be viewed online, and donations are being accepted at https://www.gofundme.com/f/help-theatre-world-awards-continue-their-legacy.

Carmine Ragusa from Laverne & Shirley Eddie Mekka has died at the age of 69. Carmine is a boxer nicknamed ‘The Big Ragoo’ who adores Tony Bennett, dreams of being a singer and eventually lands a gig in Hair on Broadway. In real life Mekka earned a Tony nod in The Lieutenant, a 1975 rock opera about a soldier court martialed over the My Lai massacre. Mekka’s first love as an actor always remained the theater, where he and Cindy Williams did several productions of Grease and he spent over a decade playing Tevye in productions of Fiddler On The Roof.

His brother stated that Mekka had been hospitalized for blood cots and could barely walk prior to his death.