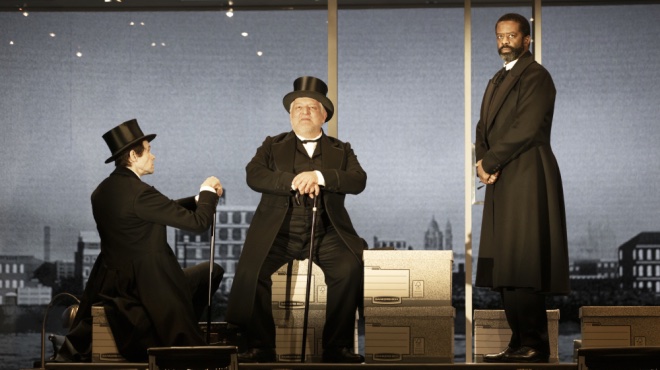 The Lehman Trilogy’ is on of the best plays to come along and now word has it that this fabulous play is being developed into a TV series by producer Domenico Procacci’s Fandango.

Italian playwright Stefano Massini’s saga of family and finance directed and adapted with a flourish by Sam Mendes, has been acquired with an option for TV rights by Italy’s Fandango.

Massini will be on board to oversee the series adaptation.

Another Broadway’ show has cancelled due to COVID. Chicago has canceled two more days of performances this week after several theater workers tested positive.The Saturday evening performance was put on hold after two workers at the Ambassador Theatre tested positive for the virus. Performances will resume Thursday, December 2nd.

Slave Play, has also announced its digital lottery in partnership with Lucky Seat. The strictly limited return engagement will offer a limited number of tickets will be available for every performance of Slave Play for $25 per ticket. Digital lotteries will begin each Monday at 12 PM ET and close the day prior to the performance at 9:59 AM ET. Winners will be notified at approximately 11 AM ET the day prior to the performance via email and SMS. Once notified, winners will have four hours to claim and pay for their ticket(s).

Lottery entrants must be 18 years or older. Tickets are non-transferable. Ticket limits and prices are at the sole discretion of the show and are subject to change. For additional rules, and information on how to enter, visit https://www.luckyseat.com/shows/slaveplay-newyork.

Fowl Play is a new musical comedy about two queer musical theatre writers who are commissioned to write an apology musical for a certain homophobic fried chicken corporation…you know which one. With theaters closing left and right to be replaced by Targets, Apple Stores, and fast-food franchises, the down-on-their-luck writing duo, Archie and Xander, are faced with the promise of a major payout and the rebirth of the Broadway musical comedy, if they can satiate the new CEO, Kimberly Chickadee, played by “RuPaul’s Drag Race” star Rosé. In the style of a Mickey and Judy musical extravaganza, Fowl Play is a take-no-prisoners satire about the commodification and commercialization of queer culture.

Genevieve Rafter KeddyJune 22, 2022
Read More
Scroll for more
Tap
He Says: Off Broadway’s Trevor Stumbles a Bit as the New Musical Comes Out at Stage 42
Countdown to Christmas Day Our Holiday Gift Guide: Be A Broadway Star!