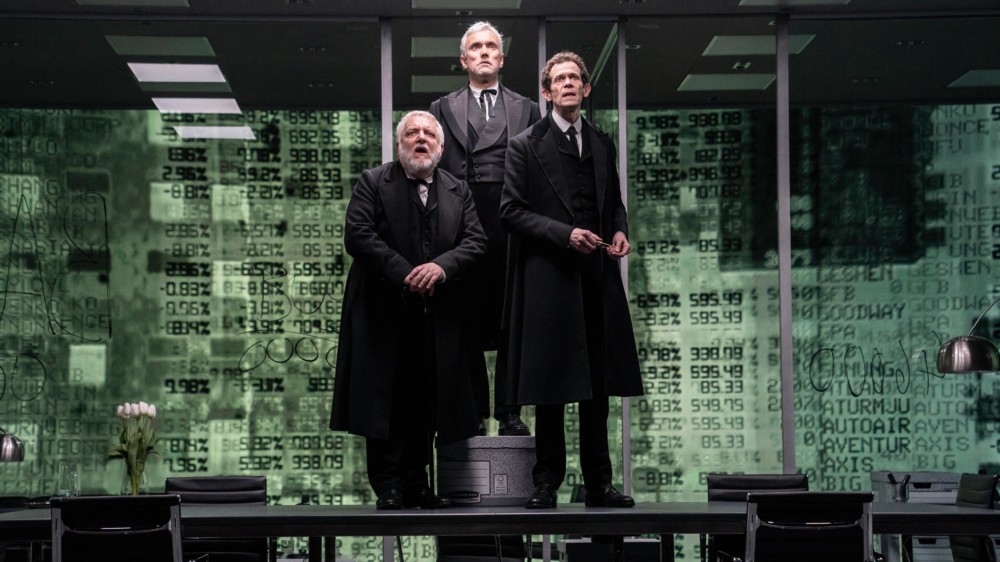 One of the shows I was looking forward to reviewing was The Lehman Trilogy. Set for a September 25th start date, with an opening night of October 14th. This will be a 14-week run. Original cast members Simon Russell Beale and Adam Godley will return with Adrian Lester taking over the role of Emanuel Lehman, previously played by Ben Miles. This is the Broadway debut for Lester, who has starred in several West End productions including as Bobby in Company, directed by Sam Mendes who will direct this production.

The Lehman Trilogy, began previews at the Nederlander theatre on March 7, 2020 and was forced to close before its opening night on March 26th. After the Broadway engagement, The Lehman Trilogy will play at the Ahmanson Theatre in Los Angeles for a month-long engagement in March 2022 and the Geary Theater in San Francisco in April 2022.

Free Shakespeare in the Park with Merry Wives, a new Shakespeare adaptation by Jocelyn Bioh and directed by Saheem Ali. The production will close with a special gala performance on Monday, September 20.

Set in South Harlem amidst a vibrant and eclectic community of West African immigrants, will be a celebration of Black joy, laughter, and vitality. A New York story about the tricks of the heart, performed in the heart of the City.

The Eugene O’Neill Theater Center announces the 2021 Summer Season, the first under the leadership of Executive Director Tiffani Gavin, which will be held in a hybrid format — both online and in-person. Support for artists, a welcoming environment for imaginative discovery and celebration, and the safety of our community are at the forefront of this #ONeillSummer.

The National Puppetry Conference, National Music Theater Conference, National Playwrights Conference, Cabaret & Performance Conference, National Critics Institute, and National Theater Institute all continue, supporting hundreds of exciting new artists, voices, and work through a mixture of virtual and in-person artistic and educational experiences. The season includes 14 free events and eight online events which will be available to artists, audiences, and supporters across the nation. Throughout these programs the mission & values of the O’Neill remain vibrant and vital.

Gideon Media, the creators behind the hit podcast Steal The Stars and the critically lauded stage saga The Honeycomb Trilogy, will premiere the multi-season science fiction epic Give Me Away, written by audio-fiction juggernaut and critically lauded playwright Mac Rogers with acclaimed director Jordana Williams. Season One of the new series will be offered in two parts, with new episodes premiering on July 16, July 23, July 30, August 6, September 17, September 24, October 1, October 8 & October 15. Episodes will be free on-demand to listeners across all platforms where podcasts may be found, with distribution from public media organization PRX.

They call the spaceship that crashed in the Nevada desert “The Ghosthouse” because it screams—the screams of thousands of extraterrestrial political prisoners uploaded into its horrific mainframe. The only way to free them… is to transfer them into the bodies of humans willing to share their minds with an alien second consciousness. But who would volunteer for that? Graham Shapiro, divorced and adrift at age 50, is one of the first to raise his hand. Season One of Give Me Away follows Graham’s journey into a world of radical hospitality, one which will touch everything—and everyone—in his life.The cast will feature, in order of appearance: Hanna Cheek (one of Time Out New York‘s “Future Legends of NYC Theatre”), Sean Williams (Advance Man at The Gym at Judson), Kevin R. Free (Welcome to Nightvale)Nat Cassidy (King Kirby on Broadway Podcast Network), Diana Oh (Infinite Love Party at The Bushwick Starr), Dani Martineck (Almelem at The Brick), Rebecca Comtois (God of Obsidian), Alba Ponce de León (The Clean Up), Jorge Cordova (M. Night Shyamalan’s The Visit), Lori Elizabeth Parquet (Shadow/Land with The Public), Stephanie Willing (Little Shop of Monsters on Audible), Ato Essandoh (Away on Netflix), Hennessy Winkler (Mrs. Mayfield’s 5th Grade Reunion with Caps Lock Theatre), Brian Silliman (High Fidelity on Hulu), Christopher Wilson (Unwell: A Midwestern Gothic Mystery), Neimah Djourabchi (Steal the Stars), Matthew Trumbull (We Are a Masterpiece with Retro Productions), and Maya Armstrong (Kid Biologists at Brooklyn Comedy Collective). The creative team includes Sound Design by Bart Fasbender (Bloody Andrew Jackson at The Public), Music Composed by Adam Blau (You’re the Worst on FX). Assistant Director Marty McGuire and Producer Cara Ehlenfeldt. Mac Rogers (Playwright) is an award-winning audio dramatist and playwright. His podcasts Steal The Stars, The Message, and LifeAfter have been downloaded over 10 million times. He has also written for prominent fiction podcasts like The Truth, Tumanbay, Arden, and Alba Salix, Royal Physician, as well as an episode of Torchwood for Big Finish. His stage plays include The Honeycomb Trilogy (three-time New York Times Critics Pick), Universal Robots, Viral, and God of Obsidian. His audio dramas and plays have earned acclaim from The New York Times, The Guardian, The Atlantic, Vanity Fair, Fangoria, io9, and many others.