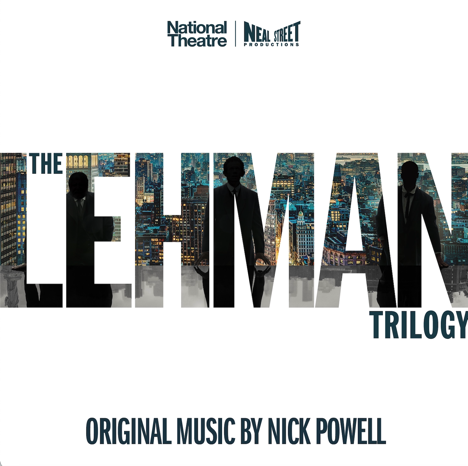 Broadway Records announced that they will release “Original Music from The Lehman Trilogy,” an album featuring the score from the highly-acclaimed, five-time Olivier Award® nominated epic play, produced by The National Theatre and Neal Street Productions. The album is now available wherever digital music is sold and on BroadwayRecords.com. The CD of the album is available for pre-order on BroadwayRecords.com, as well as other major music retailers ahead of a release on October 22nd when it will also be available in for purchase in the theater.

“Original Music from The Lehman Trilogy” includes a sweeping score from Nick Powell, which is featured in the production with Candida Caldicot performing the music live during each performance. To watch a video of Nick Powell (Composer & Sound Design) and Candida Caldicot (Music Direction) discuss the critically acclaimed score click HERE.

The Lehman Trilogy has resumed performances on Broadway, with an opening night set for Thursday, October 14 at the Nederlander Theatre.

Trevor: A New Musical Is Coming To Stage 42 In NYC This October! Performances Begin October 25th

Tickets for Beetlejuice’s return to Broadway will go on sale Friday, October 1, at 10am at www.Ticketmaster.com.  Beetlejuice will be haunting Broadway’s Marriott Marquis Theatre (210 west 46th Street) beginning Friday, April 8, 2022, with casting to be announced at a later date.

It’s showtime, folks! The ghost-with-the-most makes his Broadway return in this edgy and irreverent musical comedy based on Tim Burton’s dearly beloved film. Beetlejuice tells the story of Lydia Deetz, a strange and unusual teenager whose life changes when she meets a recently deceased couple and Beetlejuice, a demon with a thing for stripes. When Lydia calls on Beetlejuice to scare away anyone with a pulse, this double-crossing specter unleashes a (Nether)world of pandemonium, and the biggest sandworm Broadway has ever seen.

Nine months after Hitler takes Austria, a ten-year-old girl leaves Vienna aboard a train that transports several hundred children to safety in England. For the next seven years she finds herself living in “other people’s houses”: the homes of the wealthy Orthodox Jewish Levines, the working-class Hoopers, and two elderly sisters who inhabit a formal Victorian household. Told from the perspective of a child, Other People’s Houses offers an insightful and witty depiction of the habits and customs of those who gave her refuge, and a memorable portrait of the postwar immigrant experience.

“In 1938, when I was ten years old, I wrote down my story for my first foster family because it seemed to me that they did not understand what it was like to have lived in Hitler’s Vienna, or to escape to England on the Children’s Transport. The story grew into a series published in The New Yorker between 1962 and ’64, and became the novel Other People’s Houses. For a lifelong lover of the theater it will be wonderful if, in my nineties, I can see these events adapted for the stage to allow new generations to witness to the terrors human beings can inflict on each other,” said Lore Segal.

“Shortly after I read Other People’s Houses, I discovered that Lore Segal lived just two floors below me. I treasured her book and knew that it was kismet. Lore and I became friends and I started to imagine a way to bring Other People’s Houses to life onstage. I am excited to pair two theater artists I admire to adapt this moving and relevant story and I’m grateful for our ongoing collaboration with Lore,” said producer Jacob Stuckelman.

Lore Segal’s Other People’s Houses was originally published in 1964 by The New Press and hailed by critics including Cynthia Ozick and Elie Wiesel. The stage adaptation of the novel will be produced by Jacob Stuckelman and Joseph Hayes. Additional information will be announced shortly.

RossDecember 29, 2021
Read More
Scroll for more
Tap
Macbeth Shall Never Vanquish At Least If Daniel Craig and Ruth Negga Star Next Year On Broadway
Theatre News: Hugh Jackman Cuts His Nose, Ain’t Too Proud – The Life and Times of the Temptations and John Legend, Chasing Jack, Mornings At Seven