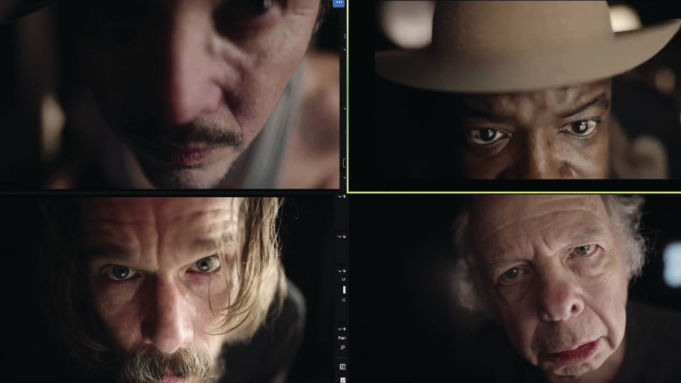 The New Group Off Stage, a new venture from Off-Broadway’s The New Group in association with John Ridley’s Nō Studios and Frank Marshall, launches with Waiting for Godot, by Samuel Beckett, with Ethan Hawke, John Leguizamo, Wallace Shawn, Tarik Trotter and Drake Bradshaw. Waiting for Godot will premiere online Thursday, May 6 at 7PM EST, and available to stream at the www.thenewgroup.org.

Waiting for Godot will premiere Thursday, May 6 at 7PM EST and be available to stream online at The New Group website.

On demand viewing can be purchased beginning Monday, April 12.  Tickets are $19.99 for a 72 hour (3 day) rental or $24.99 for a 7 day rental, commencing at time of purchase.  Audiences may also choose to purchase the $99 Off Stage Access Pass for unlimited, viewing through its release, plus access to upcoming Off Stage projects through 2021.

On Thursday, May 6th, 2021, at 8PM, the Rand Family and many popular and talented Broadway performers invite you to “plug in for PH” as they shine a light on Pulmonary Hypertension (PH) at the 6th annual “Breathless on Broadway” in celebration of WORLD PH DAY. Follow us on Instagram for updates.

To register for this FREE event, click HERE. http://events.r20.constantcontact.com/register/event?oeidk=a07ehsib4246c2a5c94&llr=sm5hsquab

Streaming virtually this year, some of Broadway’s favorites, including Aaron Lazar (The Phantom of the Opera, The Last Ship, A Little Night Music, Impressionism, The Light in the Piazza, Les Miserables, A Tale of Two Cities, Dear Evan Hansen – National Tour, Filthy Rich – TV, Avengers: Infinity War, Avengers: Endgame) Tally Sessions (Big Fish, School of Rock, Falsettos, Anastasia, Company) David Josefsberg (Grease, Motown the Musical, Waitress, The Prom, Beetlejuice) T. Oliver Reid (Hadestown, Once On This Island, Disney’s Mary Poppins, Follies, Kiss Me Kate, Chicago, Sister Act), Laurissa “Lala” Romain, (Broadway: South Pacific, Spike Lee’s Film: Son of the South, Chris Rock’s Film: Top Five) Ali Ewoldt (The Phantom of the Opera, The King and I, Les Miserables), Maria Briggs (Disney’s Frozen, Hello Dolly!, Cats, Mean Girls The Musical), Kevin Schuerig (National Tour: King and I), Zachary Sayle (Alliance Theatre’s Becoming Nancy, National Tour: Newsies, Chitty Chitty Bang Bang, International Tour: Sound of Music, World Premiere: A Christmas Story The Musical) Max Von Essen (Les Miserables, Evita, An American in Paris, Anastasia), Katie Micha (Gypsy, How The Grinch Stole Christmas, Billy Elliot National Tour), Giuseppe Bausilio (Hamilton, Hello Dolly, Cats, Aladdin, Newsies the Musical and BIlly Elliot: The Musical), Nicolas Dromard (Oklahoma, Jersey Boys, Disney’s Mary Poppins, Mama Mia – National Tour, Wicked – National Tour), Desiree Davar (West Side Story, Peter Pan – National Tour) Ellen Harvey (How to Succeed, Phantom of the Opera, Disney’s Mary Poppins – National Tour, Disney’s High School Musical – National Tour), Q Smith (Les Miserables, Disney’s Mary Poppins, Come from Away), Samantha Blaire Cutler (Dear Evan Hansen, Billy Elliot – National Tour, Orange is the New Black – TV) Carol Angeli (Miss Saigon, Disney’s Mary Poppins – National Tour), Jesse Swimm (School of Rock The Musical, Disney’s Mary Poppins), Kevin Massey (Big River, Disney’s Tarzan, Memphis, Gentleman’s Guide to Love and Murder, World Premiere: Bonnie & Clyde The Musical), Kara Lindsay (Wicked, Disney’s Newsies, Beautiful: The Carole King Musical), Raymond Lee (Goundhog Day, Disney’s Aladdin, Anything Goes, Marriage Story – Netflix, Billions – Showtime) Ryan Silverman (The Phantom of the Opera, Cry Baby, Side Show, Wicked – Chicago) Maia Katz (Innovative Artists), Liv Rand (Disney Parks Live Entertainment) and Ava Rand (Marymount Manhattan College) will raise awareness for Pulmonary Hypertension (PH), a rare disease that currently has no cure but can be managed with proper care and treatment.Broadway’s Zach Rand (Les Misérables & Disney’s Mary Poppins, World Premieres: A Christmas Story The Musical, Bonnie & Clyde The Musical, National Tours: Disney’s Mary Poppins, Radio City Christmas Spectacular) will co-host the event with his siblings Liv, Ava and Elijah in honor of their sister Chloë and all whose lives are touched by PH.”My family and I are honored to be hosting this event to raise awareness for a very personal cause. And while my sister Chloë isn’t here to witness this, we continue our fight for the many other families affected by Pulmonary Hypertension, like Broadway’s Phyllis Newman and jazz legend Natalie Cole. This year we are able to reach beyond the doors of Sardi’s and share our story with the PH and Broadway communities alike. So many of our PH specialists have been working the front lines, and this is just as much for them.” said Zach Rand. Liv Rand said “Music has always been a vital aspect of communication for our family, and we are elated to bring together performers from over 30 different shows to unite their voices and raise awareness for those who often lack the breath to speak. Likewise, we’re bringing Broadway into the comfort of home in an accessible way that brings many of our friends back into the spotlight. We’ve also been working on some new and exciting projects with Noah Sunday Lefkowitz (Disney Parks Live Entertainment, Walt Disney Imagineering) that are going to be featured this year!” Tune in to Virtually Breathless for some great surprises!”The idea for breathless on Broadway began in the car driving home one night when Zach was appearing in Les Miserables on Broadway. He asked if someday his voice would be big enough to help other people. He was nine years old. Just before Zach’s eighteenth birthday, the first breathless on Broadway happened. We are grateful Virtually Breathless is generously supported by Janssen Pharmaceutical Companies of Johnson &  Johnson, Acceleron, United Therapeutics Corporation, GossamerBio, Altavant Sciences, Inc. and Stage Door Designs.” said Marie Mascia-Rand.Pulmonary hypertension (PH) is a rare, life-threatening disease affecting the arteries of the lungs that can lead to right heart failure. PH patients experience symptoms such as shortness of breath, dizziness and fatigue. While there’s currently no cure, there are 16 FDA-approved therapies available to help patients live better lives. Without treatment, mean survivability is only 2.8 years. The Breathless franchise is dedicated to raising global pulmonary hypertension awareness and raising funds for critical PH research. Learn more at: breathlessonBroadway.com

With music by Eric Rockwell, lyrics by Joanne Bogart, and book by Joanne Bogart and Eric Rockwell, this special presentation is directed by Tom D’Angora and Michael D’Angora, with music direction and arrangements by Deniz Cordell and associate music director Annie Pasqua. Original director Pamela Hunt is serving as artistic supervisor. This event will raise funds to help The York recover and rebuild after devastating damage from a water main break on January 4, 2021.

After a Lexington Avenue water main break in early January caused a massive flood in their space, The York Theatre Company has been forced to temporarily relocate for the first time in nearly 30 years while their home undergoes major remediation. The York is spread among various storage facilities across the tri-state area, and their plight caught the attention of producing trio Tom D’Angora, Michael D’Angora, and Tim Guinee, who had recently stepped in to raise funds to save the West Bank Cafe and Birdland Jazz Club. The trio wanted to help and, donating their time, have taken on The York as their next project.

Perfect Crime, the longest running play in New York City history, today announced that it is the first show to receive Actors’ Equity approval to re-open on Sunday, April 18th at 7:30PM – its 34th anniversary performance. The production is the first Actors’ Equity production on or Off-Broadway to return to NYC with live actors. Perfect Crime will reopen with a newly updated ventilation system, a fully vaccinated cast and staff, and numerous safety precautions and policies in place.

Perfect Crime will do a special “preview” performance on Saturday 4/17 at 8:00PM and then officially reopen on Sunday 4/18 at 7:30PM (a celebratory performance where the audience will be given complimentary champagne before entering the theater). The permanent schedule will be as follows: Monday-Tuesday and Friday 8 PM, Saturday 2 & 8 PM and Sunday 3 & 7:30 PM. www.perfect-crime.com

The Covid-19 pandemic did what 9/11, the subsequent worst recession since the Great Depression and the Swine Flu pandemic could not – temporarily suspend performances of the long running murder mystery. The production, written by the late Warren Manzi and produced by Armand Michael Hyatt, has the distinction of being the only show (on or Off-Broadway) that has run over the course of five different decades – during the 80s, 90s, 2000s, 2010s and now the 20s. The ‘urban legend’ has managed to withstand the test of time – evolving with the changing styles, technology, culture, audiences, and various crisis’ around it.

The show will begin its 35th year of performances is reopening with numerous safety upgrade, precautions, and policies in place

Suzanna BowlingJanuary 26, 2023
Read More
Scroll for more
Tap
What to Watch in The New Year: April 14
The Story of Harlem’s Numbers Game