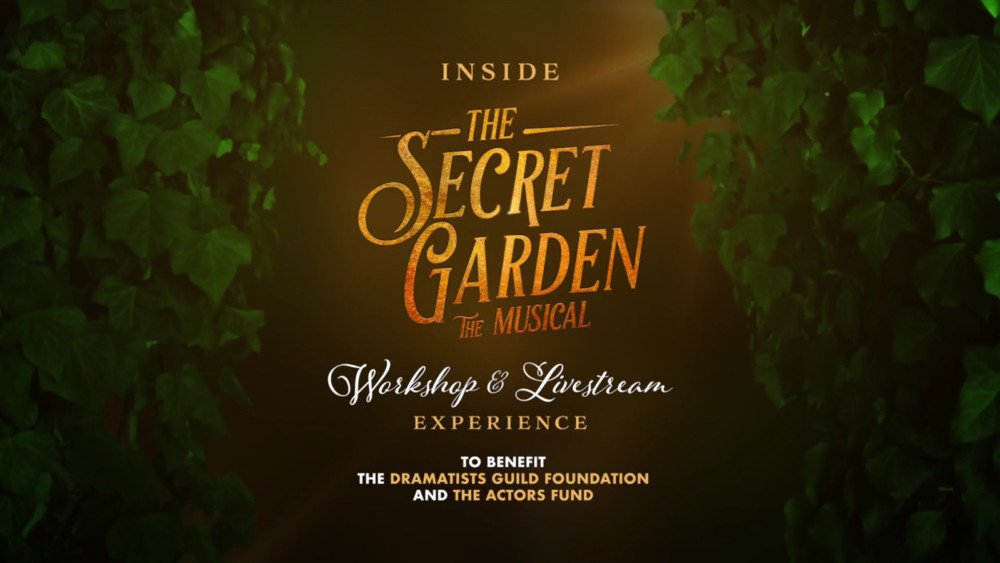 The workshop for the first-ever revival of the Tony Award®-winning musical, The Secret Garden, will be presented on the industry-leading streaming platform, Broadway on Demand from May 6 at 8pm ET through May 9. The never-before-seen work, Inside The Secret Garden: Workshop and Livestream Experience, will be the first-ever workshop available to the public and will benefit The Dramatists Guild Foundation and The Actors Fund. The stream is dedicated in loving memory to Rebecca Luker, the original Lily.

Tickets to this workshop broadcast event will be $10 beginning May 6th, 8pm with unlimited access in a three-day window through May 9th. To purchase tickets, please visit HERE.

For an additional donation, viewers can join the livestream experience, which will include an exclusive virtual red-carpet event featuring Marsha Norman and Lucy Simon on May 6, 7 PM prior to the premiere. Norman and Simon will chat about their creative process, insider anecdotes, and their continued love of The Secret Garden. Purchase includes this pre-show Red Carpet event, workshop stream, and access to the virtual post-show “Come to My Garden” Party, an interactive Q&A with the Tony Award-winning director Warren Carlyle, May 6, after the premiere broadcast.

First produced on Broadway in 1991, The Secret Garden ran for more than seven hundred performances, snagging six Tony Award nominations, including Best Musical, and winning for Best Book of a Musical, Best Featured Actress in a Musical (Daisy Eagan), and Best Scenic Design of a Musical. It won the Drama Desk Award for Outstanding Musical.

In a more classical vein, Opera Saratoga will also present Don Quichotte at Camacho’s Wedding, a one-act comic serenata by Georg Philipp Telemann with a libretto by Daniel Schiebeler, taken from an episode from Part Two of Cervantes’ celebrated novel, in which the Knight and his squire Sancho Panza encounter some rather strange wedding celebrations as they roam the world in search of adventure. The al fresco production will be staged by Rebecca Miller Kratzer and will be conducted by Michelle Rofrano in and around the Columbia

L.A. Theatre Works presents Roundabout Theatre Company’s production of The Importance of Being Earnest, filmed live in HD direct from the Broadway stage.

The presentation is hosted by David Hyde-Pierce, and includes an intermission feature with Alfred Molina and UCLA School of Television, Film and Theater professor Michael Hackett discussing the life and works of Oscar Wilde.

Directed by and starring Tony Award® Winner Brian Bedford in his final stage performance, The Importance of Being Earnest features the original Broadway company performing Oscar Wilde’s comedic masterpiece. Charles Isherwood of The New York Times says: “The great actor Brian Bedford is brilliant in this funny and effervescent production. It’s one of the great performances of the season; to miss it would most definitely look like carelessness.”
Starring (in order of appearance):

Are Wicked, The Lion King and Hamilton set to return around Labor Day? That is the rumor. Also Moulin Rouge! was called into a Zoom meeting and was informed that the show will reopen in mid-September.

Suzanna BowlingMay 2, 2021
Read More
Scroll for more
Tap
Meet Anaïs Reno Who Embodies Jazz Like An Old Soul
What to Watch in The New Year: May 3