Theatre News: The Tonys, Tickets Get New Kid on The Block, Licensing Plays, The Jimmy Awards and Women on Broadway 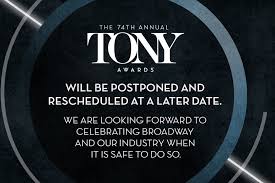 Theatre News: The Tonys, Tickets Get New Kid on The Block, Licensing Plays, The Jimmy Awards and Women on Broadway

The question here is why have the 2020 Tony Awards announced they will happen without a date? We were already told they would happen. Now the show will most likely take place around the same time Broadway reopens, but to get anyone to answer that question is impossible.

Nominees were announced in October and only 18 productions were eligible due to the pandemic which closed productions on March 12th. The virtual celebration was postponed due to the Black Lives Matter protests.  Now voting for the 2020 begins March 1st and continue through until the 15th.

Jujamcyn Theaters drop Ticketmaster for new kid on the block SeatGeek. SeatGeek allows patrons to browse shows, compare listings and find a ticket within their exact specifications. They also can order concessions, purchase an upgraded experience, read more details about the show directly from their ticket and buy souvenirs that will all be waiting for them as they enter the theater.

The company which is eleven-years-old is headquartered in New York, with international offices in the UK, Israel, and Italy.

Dramatists Play Service, is a theatrical publishing and licensing house that has now been bought by Broadway Licensing. The transaction is expected to be completed by the end of March 2021. This means that the drama publishing world is being consolidation and put into a smaller box as the theater world is impacted by the coronavirus.

The company was founded in 1936 sites dramatically reduced fees for licensing plays and musicals to theater companies around the world as to why the sale has happened.

Under the deal, Dramatists Play Services will continue to oversee productions of plays and playwrights, while Broadway Licensing will become the new home for musicals currently under the Dramatists banner.

The Jimmy Awards, a Broadway League-backed competition for high school students, has set a July 15, 2021 for their virtual show. This annual awards show, features musical theater students from across the country performing and showing the country what new talent has to offer. 140,000 students compete in high school musical theater across the country. Two nominees from each regional competition are then invited to New York to participate in training sessions and the final showcase.

Eva Noblezada, Ryan McCartan, Kyle Selig, Andrew Barth Feldman, Reneé Rapp and Jai’Len Christine Li Josey  are just a few of the talent to come from this show. The Jimmy’s is now in its 13 year.

Disney On Broadway has announced their 4th Annual Women’s Day on Broadway. Taking take place virtually on March 12th at 1pm, the event’s theme will be “Reflecting Courageously, Transforming Collectively.”