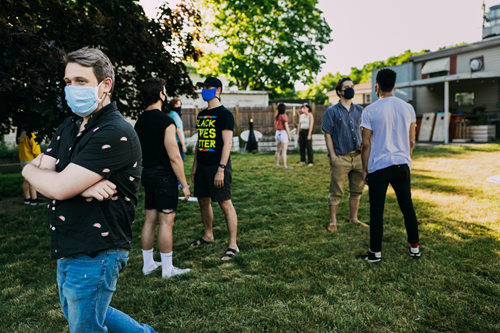 Tony Award nominated director Michael Arden has convened a company for the development of an entirely new immersive, part walking/part drive-through theatrical experience, taking place this coming week in New York’s Hudson River Valley. American Dream Study is a site-specific theatrical experiment will provide a first-of-its-kind socially-distanced communal experience for the age of COVID-19. The company-devised piece will be staged throughout the Columbia County towns of Philmont, Claverack, and Harlemville, with audience members receiving instructions on when and where to drive, park and walk via several smart technologies. American Dream Study will benefit small, local businesses in the communities in which this invite-only premiere will be explored.

Repertorio Español announces the finalists of The 2020 Miranda Family Voces Latinx Playwriting Competition, an initiative to develop and promote Latinx plays that resonate with and accurately depict the Latinx experience by playwrights of all racial and national backgrounds. The company will stream readings of the five finalists after having received 180 scripts written in English or Spanish by emerging playwrights from the entire United States and Puerto Rico.  All readings will premiere on the Company’s Facebook and YouTube sites which can be found using the social handle repertorionyc.

ElizaBeth TaylorAugust 8, 2022
Read More
Scroll for more
Tap
What To Watch June 21st To Take Away The Blues
The Glorious Corner