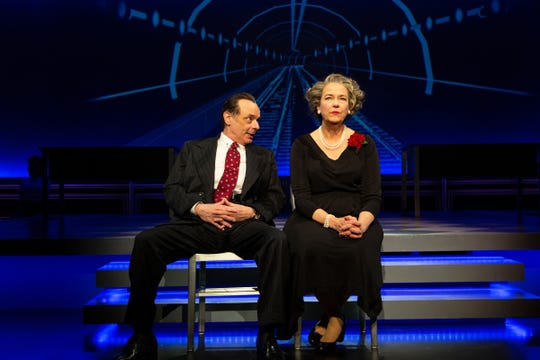 This link will take you to the announcement on Thursday at noon: www.TonyAwards.com/Announcement2020

The original cast of two-time Tony winner Joe DiPietro’s Conscience will come together again for a live reading of the play with George Street Playhouse to stream October 27 – 30. Due to the shutdown of theaters throughout the state in March, the world premiere of the production was canceled just days after it opened.   “We are thrilled to bring this timely play to a virtual stage for our patrons,” said Artistic Director David Saint, who also directed the production. “Our audiences tell us they are eagerly anticipating a return to the theater, so what better way than to bring back this powerful production, using technology that allows patrons to watch from the comfort and safety of their homes.”

On June 1, 1950, Senator Margaret Chase Smith stood on the Senate floor and delivered her “Declaration of Conscience” in a historic moment of political courage. This sharply written new play by Tony Award-winner Joe DiPietro takes you behind the scenes of 1950s Washington in the days leading up to and following the singular speech that rattled McCarthyism, Congress and the nation itself. Harriet Harris’ portrays Margaret Chase Smith. Playwright/lyricist Joe DiPietro has won two Tony Awards, a Drama Desk Award and three Outer Critics Circle Awards. His musicals and plays have received thousands of productions across the country and around the world. Broadway: The upcoming DIANA (after debuting on Netflix in early 2021), MEMPHIS (Tony Award-winning Best Musical), NICE WORK IF YOU CAN GET IT starring Matthew Broderick and Kelli O’Hara, ALL SHOOK UP, and LIVING ON LOVE starring Renée Fleming. Off-Broadway: I LOVE YOU, YOU’RE PERFECT, NOW CHANGE (the second longest-running musical in Off-Broadway history), THE TOXIC AVENGER, OVER THE RIVER AND THROUGH THE WOODS, THE THING ABOUT MEN, CLEVER LITTLE LIES starring Marlo Thomas, and ERNEST SHACKLETON LOVES ME. Harriet Harris has appeared on Broadway in THOROUGHLY MODERN MILLIE (Tony Award), CINDERELLA, IT SHOULDA BEEN YOU, THE MAN WHO CAME TO DINNER, PRESENT LAUGHTER, CRY-BABY and OLD ACQUAINTANCE. Her numerous Off-Broadway credits include JEFFREY, and ME AND MY GIRL and LITTLE ME at Encores! Film & TV includes MEMENTO, “American Horror Story,” Felicia Tilman on “Desperate Housewives,” Bebe Glazer on “Frasier,” Ingrid on “Ratched,” and PHANTOM THREAD. Also starring in CONSCIENCE as Senator Joseph McCarthy is Lee Sellars, who appeared in Broadway in WEST SIDE STORY, TALK RADIO and A TIME TO KILL. Other NY stage credits include IOWA, THE ALCHEMIST and GUN-SHY. Film & TV: “The Sopranos,” “House of Cards,” “Chappelle’s Show,” “Mindhunter,” “Billions,” GROUNDHOG DAY, “Elementary,” and “Luke Cage.” Rounding out the cast of this highly anticipated world premiere are Mark Junek (“Forever,” “Smash,” “Blindspot”) and Cathryn Wake (Broadway’s NATASHA, PIERRE & THE GREAT COMET OF 1812, THE OTHER JOSH COHEN).

The evening will also benefit two other non-profit orgs, The Bridgehampton Child Care & Recreational Center, and The Jon Bon Jovi Soul Foundation. The price to view is $75 per household; virtual tickets can be purchased online at www.GuildHall.org/JoyBehar, ticket buyers will be emailed a link to the private YouTube Live feed beginning 24 hours before showtime. Directed by John Gould Rubin, the plays/casts for the evening are:

“Get Me Teresa Caputo” featuring Dylan McDermott, Brenda Vaccaro, Robert Klein, and Irene Sofia Lucio: a woman wants to settle a score with the dead.

BroadwayHD, the premier streaming service for theater fans, today announced that it will be bringing the San Francisco Opera’s critically acclaimed 2014 performance of Show Boat exclusively to their platform.  This dynamic production of the iconic hit, directed by Francesca Zambello, will be available on the service beginning October 16.  Show Boat is only the latest addition to BroadwayHD’s expanding library of hit Richard Rodgers titles, many created with Oscar Hammerstein, including Oklahoma! Starring Hugh Jackman, The King and I and Carousel starring Kelli O’Hara.  This is also part of BroadwayHD’s ongoing effort to build a comprehensive library that includes beloved, well known titles in addition to new discoveries.

The cast will get volunteers trained and entertained– and most importantly, write lots of letters to underrepresented voters asking them to vote in critical elections, and then send them all out the next day! More than 15 million letters will be mailed on the 17th as part of The Big Send, a grassroots coalition campaign led by Vote Forward. The event will also feature live performances, fan trivia, un-released recordings from the Broadway production, a dance tutorial, and a conversation with special guest Michael Moore.

The event is free to join. Participants must register HERE and will then be provided with instructions on what to have on hand for the event.

WriterFebruary 18, 2022
Read More
Scroll for more
Tap
CODAsummit 2020 Kicks Off with Virtual 3D Celebration
Alfie’s Bar & Kitchen is the Place to be in Midtown for Foodie Delights