British director, designer of costumes and sets Tony Walton, passed away at the age of 87. He died on March 2nd from issues related to a stroke. He won 16 Tony Award nominations for his sets and/or costumes. He won Tony’s for  Pippin, House of Blue Leaves, and Guys and Dolls. Among his 20 films, Mary Poppins, The Boy Friend, The Wiz and Murder on the Orient Express earned him five Academy Award nominations. All That Jazz won him the Oscar and Death of a Salesman the Emmy.

Walton, who also worked on Broadway in Golden Boy, Chicago, A Day in Hollywood /A Night in the Ukraine, Woman of the Year, Sophisticated Ladies, Anything Goes, I’m Not Rappaport, Grand Hotel, The Will Rogers Follies and Uncle Vanya, among others.

In 1991 he was elected to the Theatre Hall of Fame.

Married to his childhood sweetheart Julie Andrews, from 1959 until their 1968 divorce, they had one child Emma. He then married Gen LeRoy, and has a daughter with her Bridget LeRoy. He also has grandchildren, all who have outlive him. 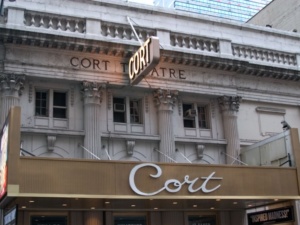 Last fall, Black Theatre United published a document called “A New Deal for Broadway,” in which major theater owners each agreed to rename at least one theater after a Black artist.  So now no longer does Broadway have the 110 year old Cort Theatre. The Shubert Organization, Inc., is renaming the  Theatre to the James Earl Jones Theatre, in recognition of Mr. Jones’s lifetime of immense contributions to Broadway and the entire artistic community.

Mr. Jones’s Broadway career began in 1957, and in 1958 he played his first role at the Cort Theatre in Sunrise at Campobello. Over the following six-and-a-half decades Mr. Jones rose to star in countless stage and screen productions (including twenty-one Broadway shows), becoming one of a small number of lifetime “EGOT” (Emmy, Grammy, Oscar, Tony) winners. Mr. Jones’s Tony awards include Best Actor in a Play for The Great White Hope (1969) and Fences (1987), as well as a Lifetime Achievement Award in 2017. He has additionally won seven Drama Desk Awards and has been awarded the National Medal of Arts and the Kennedy Center Honor.

“The Shubert Organization is so incredibly honored to put James-an icon in the theatre community, the Black community, and the American community-forever in Broadway’s lights,” said Robert E. Wankel, Shubert CEO and board chair. “That James deserves to have his name immortalized on Broadway is without question.”

In a live-streamed conversation with Harvey Fierstein and Curator of the Billy Rose Theatre Division Doug Reside, the New York Public Library for the Performing Arts at Lincoln Center announced that award-winning architect and scenic designer David Rockwell and the LAB at Rockwell Group, Rockwell Group’s experience design and technology studio, will design the Harvey Fierstein Theatre Lab.

David Rockwell said, “We are honored to be able to create this space for exploration, innovation, and imagination. Harvey’s vision of creating a new home for the next generation of theater artists is a vital part the Library for the Performing Arts’ mission to inspire and support creativity.”

The Harvey Fierstein Theatre Lab will be an immersive learning environment inside the Theatre on Film and Tape Archives (TOFT). Creating a safe space for risk and artistic exploration, the Lab will invite the next generation of theater artists to see themselves as part of the canon, learning and leaving their mark alongside those who came before. Designed for high-levels of flexibility, the Lab’s modern black box design will facilitate a range of activities, from class visits, screenings and workshops to rehearsals, readings and recordings, in an acoustically isolated space.

David Rockwell and the LAB at Rockwell Group are designing a 770-square-foot fully integrated environment that features a series of tools, including modular acting blocks, mobile work surfaces, a projection screen and high-tech design visualization equipment, embedded into the walls. Highlighting the Library’s resources, the entire TOFT collection will also be available at the touch of button, providing artist and educators with the ability to not only read the words of playwrights who have come before, but to step into the worlds they have created.

Theater students and makers of all ages will be invited to use these tools to transform the Lab into the ultimate scene partner—a responsive performance space accommodating multiple needs and uses. KPOP was set to have its pre-Broadway run at D.C.’s Signature Theatre in 2021, but the run was cancelled due to the pandemic. Now the new musical has its eye on a fall Broadway Opening at least according to an Actors Equity notice. K-Pop star Luna, has been rumored to have the female lead played by the brilliant Ashley Park. The casting notice did not have the female lead listed to cast so you tell us?

Suzanna BowlingJanuary 22, 2023
Read More
Scroll for more
Tap
Out of Time at the Public Delivered Crisply In, Wisely Knitted by NAATCO
May We All: A New Country Musical Starts at Tennessee Performing Arts Center in Nashville, TN